Coronavirus: A mum's life inside the first US containment zone

Tamar Weinberg and her family are among the residents living within New Rochelle's one-mile (1.6km) containment zone, which will remain in place until 25 March.

None of her family have shown symptoms of the coronavirus, but have been self-isolating since last week, when the first case in the community was reported at their synagogue.
Speaking to the BBC from home, Ms Weinberg described her fears and frustrations on the second day of New Rochelle's lockdown.

"I've been in quarantine since last Wednesday, so as far as I'm aware, I don't even see the containment zone. I've been confined to my property. It's been kind of a mess here. There have been a lot of inefficiencies in terms of testing.

At home, it gets a little bit stir crazy, especially when we're trying to control the kids.

Nobody prepared for this. It's like any natural disaster or accident. You wake up, you could get in a car accident and not have any clue. It's akin to that, you don't expect that things could change literally in a second.

It's such a weird dynamic. I'm living in this bubble and going on social media; that's my interaction right now. It's business as usual in the real world, and it's so hard to get my head around that reality.

My reality is this bubble. I've been frozen in my own tracks.

There is a silver lining of community in general. We have a tremendous support network of neighbours, members of the community, friends and family. They have truly supported us during this time.

Thanks to social media, it has been anything but isolating. In some ways, I feel more connected than ever. Internally, it's really beautiful.

Containment is not sustainable
As the outbreak grows in our community, we have to trust that we're going to maintain an honour system. 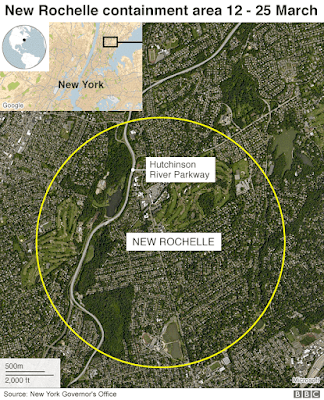 I think that that response is appropriate. It's not something we can do on a national roll out. As a member of a congregation, I think that's helpful. But there's only so much that can be done. It's not going to stop the spread anywhere. This is something that ebbs and flows, it's more of a ripple effect.

As people get better, others will get sick. It [the containment strategy] is not sustainable.

A mother's touch
As a parent, I'm already isolated as it is, and then I have to further isolate [from my kids]. That's the challenge that a lot of people don't understand. I find myself hugging my children without thinking, but I have to think twice now.

For me, I have to maintain some sort of honour system to keep a distance. I have to be cognisant, and make sure I do not have any contact with them.

When I find myself hugging my child, I think to myself, wait a minute I shouldn't. But at this point I don't have regrets, because my children need me.
The school has been absolutely amazing. They erected this virtual learning website at incredibly short notice. Who could have predicted this would happen?

My children have had virtual classes, every day. They can see their classmates across the area [on camera]. There are activities, so the teacher might record an eight-minute video explaining what to do, and the kids follow it.
There are lots of fitness and gym classes, too. I've seen them doing mountain climbing, which is the cutest thing ever. It's good for them. It's a glorified vacation with an educational component.

Riding out the coronavirus storm
For myself, I'm going to take all the precautions and minimise contact. I'll be staying indoors for the moment. If I had any exposure [to the coronavirus], I want to make sure I ride that storm, and ride it without the risk to my neighbours and friends.

I'm hoping that, after next week, life will resume as normal next week. I'll be coming out of my ripple.

I'm hoping that in due time, we'll all be able to ride this storm together. We'll come out the other side healthier and stronger as a people."