Close to 500,000 litres of contraband vodka and illegally produced alcohol can now be used as disinfectants in the fight against the new Coronavirus, the National Office of the Public Prosecutor in Poland announced on Friday.

The country’s customs and tax-collection services have been holding at least 430 litres of vodka and pure alcohol, whether adulterated or not. Some of it was seized to serve as evidence in court cases while the rest was confiscated following such cases. Instead of being destroyed, thousands of litres have now been handed over to the relevant services to disinfect buildings, rooms and vehicles. 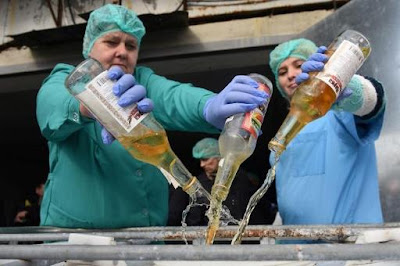 The fire services in Olsztyn, an area in northeastern Poland that shares a border with the Russian region of Kaliningrad, received 1,000 litres of pure alcohol, while three hospitals, two in Olsztyn and one in Elblag, were given a total of 2,500 litres, said Marta Rosiak, spokesperson for the Customs Administration in the area.

The operation will continue in the next few days with similar donations to the police, border guards and public administration.

Clandestine distilleries, both backyard operations and industrial plants are often dismantled in Poland, especially in the country’s northeast. They produce “bimber”, a home-brewed vodka popular in the countryside and far cheaper than its legally produced equivalent.