I’m aiming my camera at a bench on Pearl Street in Boulder, Colorado. The red-brick path is lined with outdoor shops, galleries, and breweries. Boulder Bookstore. The clouds draw their curtain, a gray weight. The Flatirons are weighted, too, diagonal slabs of sandstone towering like three growing spikes on a graph.

Eighteen years ago, I sat on this bench.

I wait for strangers to step out of the frame. They pass or linger in lace-up boots and parkas, jeans and huddled laughter—all intruders, because while I stand on this brick street in winter, it’s really a long-ago afternoon in June. 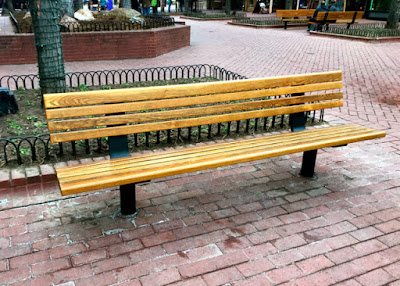 In “Street Haunting,” Virginia Woolf asks, “Is the true self this which stands on the pavement in January, or that which bends over the balcony in June? Am I here, or am I there? Or is the true self neither this nor that, neither here nor there, but something so varied and wandering that it is only when we give the rein to its wishes and let it take its way unimpeded that we are indeed ourselves?”

Maybe we go back to places not to ask questions, but to realize we don’t have them anymore.

That day in June, my father—who’s been gone for three years now—sat next to me on this bench and said something about how it must be hard to leave a place so beautiful. I looked toward the Flatirons: “There’s too much sadness here.”

I’m back in Boulder because I want to show my daughter, now eighteen, where she was born, where she lived as an infant, where she began. I want to try to explain who I was here.

I think we harbor our longings for places we’ve left because we miss who we were in them. I’ve lingered in door frames and driveways, felt the pierce of pulling away from a past self. The hardest part is knowing what I can’t take with me. Because after enough miles and enough passed exits, something dissolves, like light in a room when the sun turns down.

I’ve always thought I realized a place only after I left it. But maybe it’s this, the return.

While I wait to take the photograph, my daughter stands beside me. I have told her the bench’s story. She steps closer to me as the sky grows darker, the air colder.

For one summer in my late twenties, I lived in a small, two-story house on the banks of the Eagle River in Colorado. A friend coaxed me there, told me she and her husband needed help with the resort-town rent. I settled into their corner room upstairs. One afternoon, not long after I’d arrived, I pulled into the gravel drive and stepped out—I can still hear the crunch of tires against the stones—toward a very tall, bearded man. The fourth roommate. Later, he told me it felt like he had been standing there waiting for me to come home. The summer unfolded. I waited tables at a bar in Vail, and he wired condominiums in the valley.

Seasons come and go, and that summer ended with a phone call from a university offering me a job. I delayed my departure until late August, when the bearded man and I lingered in the gravel drive. He snapped a photograph—my head thrown back in laughter. After I drove thirty minutes down the mountain, I realized I had forgotten my makeup bag. I turned back and found him standing in the drive, weeping. As I stepped out, he rushed over and picked me up. He thought I had changed my mind. He thought I had come back.

But I left. Again.

A year passed, me in Texas, him in Colorado, by that time Boulder, but we never turned away, our approach toward one another like the pull of a river. One day, I found two letters from him in the mail. I drove back to Colorado.
The bearded man and I lasted four years. Four months after our daughter was born, he woke me one morning to say he was going, for good. His sudden absence loomed like the Flatirons. I’d drive every street, looking for nothing but the blue of his truck. I’d leave questions on his voicemail. He never answered.

I should have come back to Boulder years ago. When I left, I left lonely and aching and lost, but when my daughter and I returned, I returned to images I had forgotten, like the photos of her at six months that slipped from a book last week. When I looked up at the balcony of our old apartment, I heard the click click click click of my daughter’s swing in the living room. When I turned down one street, I saw my friend, Charles, in his black coat, sitting across from me on the patio of the Hotel Boulderado. I drove near the trail I used to run along the foothills. Saw myself laughing as I ducked into the Sink for a pint. Setting the infant seat down in the upstairs ballroom of Boulder Bookstore while I pulled paperbacks from shelves. I passed the day care where I picked up my daughter that day in June after the bearded man stepped onto an elevator, after I moved to a window in the courthouse to watch his blue truck pull out of the parking lot. He left town not long after. No idea where he might be now.

That June, as I sat on this bench with my father, I studied the graph of my life before me—I would raise my daughter on my own. My father patted my knee. We were looking at the Flatirons when he said the words, “It must be hard to leave such a beautiful place.”

“The sights we see and the sounds we hear now have none of the quality of the past,” Woolf writes.

I left Boulder a long time ago, and eventually, the sadness left me. I had to come back to see the the beauty, the best part of this place. She huddles against me, so much taller than I, her long blonde hair a swirl in the wind. I snap the photograph.

Email ThisBlogThis!Share to TwitterShare to FacebookShare to Pinterest
Labels: USA