I’ve never owned a house or a refrigerator, never had to think about knobs for cabinets. The cabinets in our apartment don’t have knobs, and it’s not for the sake of sleekness or simplicity. It’s cheap, functional. Lately, every time I open the front door, I wonder how many strangers have closed it for the last time. I wonder what might have caused the painted-over dents on the wall in my bathroom. And I wonder if someone else stared at the gap between the front door and the foundation the way I do, saw the sunlight sneak through during the day, felt the cold scuttle in across the floor at night.

Every time my daughter and I have moved, I’ve rented a place sight unseen, because I can’t afford to make the trip to the new town to scout rentals, walk room to room, peek in closets. I’m easily swayed: I said yes to the house in Utah when the landlady on the phone said, “It’s on a corner,”; yes to the duplex in Oklahoma because a Craigslist photo showed a built-in bookshelf in the living room; and yes to this apartment complex because the website showed black appliances, and we’d never had black appliances before. 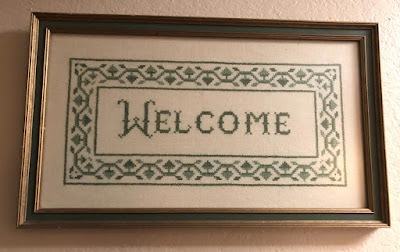 Last year, I decided to rent a house. I wanted to give my daughter, Indie, two things for her last year at home: one, a place to practice trombone without worrying about the neighbors, and two, her own bathroom, which she’s never had.

Not long before my mother died, she worried about my inability to make decisions. She told me it had been her fault, hers and my father’s, that they had made all my choices for me when I was growing up. I suppose that’s true.

When I went to the apartment office to put in our sixty-day notice, I asked the receptionist, “What happens if I change my mind?” She assured me that as long as I came back in before the lease was up in May, I could sign a new one.

Indie started zooming through Zillow and Trulia, lugging her laptop onto the couch every night, showing me gray-carpet living rooms and backyards, asking the budget, X-ing out ones that exceeded it. We drove down tree-lined streets for walk-throughs, but the rooms either reminded us (in a bad way) of a place we had lived before, or I’d call the number on the sign out front to hear it had been rented that morning. The weeks went by.

Indie and I contextualize our lives, the years, by cities: “We were in Canton, so you were nine, ten”; “That last year in Stillwater, so it would have been 2011”; or “You remember a mirror on the back of the bathroom door? Cedar City.” We can pack boxes and run tape across them and keep track of the Sharpie pen through the span of a few viewings of Tootsie, our moving movie. The one that plays while we pack and fill garbage bags, the kind of bags meant for leaves.

When we had only a week left in our lease, I went to tell the apartment manager we’d be staying. He pulled out a black binder, flipped to a spreadsheet, told me our apartment had been rented. The receptionist, it turns out, had been let go weeks before, and someone was scheduled to move in to our home, our rooms, our kitchen, our bathroom, in eleven days.

Indie and I have a tradition: on our last day living somewhere, after a truck has backed up and hauled away the U-Box, when the rooms are empty and the shower curtainless, we leave pennies. I give Indie a few, grab some for myself, and we disappear into our own spaces, leaving a penny on a windowsill or on the floor where my writing desk had been or on a shelf in her room. We only tell each other where we placed them, and why, after we’ve gone.

When the apartment manager offered us a two bed, two bath apartment across the parking lot for the same rent, I went out to the storage closet on the patio and started pulling out empty boxes, the same ones we’ve always used for all our moves. Cue Tootsie. Sharpie on the kitchen counter, packing tape, a box of black bags. We kept thinking how we had lived in this apartment longer than we had lived anywhere. With every pull of tape, every BOOKS written on a box, every time Indie dragged a bag from her room across the floor, I thought, This is the last time we’ll move together. The next move will be hers alone.

This complex has signals for vacant apartments: blinds closed and the dining room light on means this one needs maintenance or cleaning. Blinds open means the apartment’s ready. The doors, I discovered years ago, remain unlocked until move-in day. On the last night before the new tenants were scheduled to arrive in June, I hurried across the parking lot with a blue Bic pen and slowly opened the door to our old apartment, the light from the streetlamp crossing the dark floor in lines. Here was where I told Indie her grandfather was gone, here was where she played trombone, where I wrote essay after essay, where we returned after leaving the hospital the morning my mother passed, where Indie posed for a picture in a blue dress for prom, and where I shook the hand of her first date. I opened the front closet, stepped inside, and wrote on the inside wall: “We lived here. 2015-2019.”

Sometimes I use Google maps to look at the places we’ve lived, to see how they’ve changed. It’s strange to live across from our old apartment, to look through the blinds to see strangers moving through rooms we knew. This morning, when I stood outside to wave as Indie pulled away for school, I noticed the two garden hooks she had screwed in on either side of our balcony for hanging baskets. Empty.