The world’s most dangerous countries for 2020 have been revealed in a new interactive map.

Libya, Somalia, South Sudan and the Central African Republic, all in Africa, are the riskiest countries, according to the Travel Risk Map.

For the first two categories, countries are given a rating out of five, while road safety is rated out of four based on the mortality rate per 100,000 people.

Only the four countries mentioned scored the lowest safety band in each category: “very high” for travel medical risk; “extreme” for travel security risk; and more than 25 (deaths per 100,000) for road safety risk.

At the other end of the spectrum, Iceland, Norway, Finland, Denmark, Switzerland, Luxembourg, Slovenia, Andorra and Svalbard all achieved the highest safety marking for all three criteria.

The UK scored “low” for medical risk and the lowest mortality rating for road safety, but was ranked as “low” rather than “insignificant” in the travel security risk category.

Other countries graded “extreme” for security risk include Mali in northwest Africa and Syria, Iraq, Yemen and Afghanistan in the Middle East. 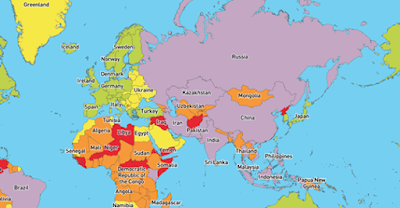 Other factors, such as the robustness of the transport infrastructure, the state of industrial relations, the effectiveness of the security and emergency services and the country’s susceptibility to natural disasters are also considered.

Some 51 per cent of respondents believed that health and security risks had increased in the past year, while 47 per cent anticipated risks – including security threats, civil unrest and geopolitical unrest – would rise in the year ahead.