Vogue has featured a “muxe” - an indigenous transgender woman from Mexico - as its cover star for the first time.

Muxes (pronounced ‘moo-she’) have a unique gender identity that mixes gay male and feminine characteristics and is sometimes referred to as a “third” gender.

Both the British and Mexican editions of the magazine will carry the image of of Estrella Vasquez, a weaver and designer from Oaxaca, a southern Mexican state that is home to the largest muxe community in the country, although British Vogue will feature it inside the magazine. 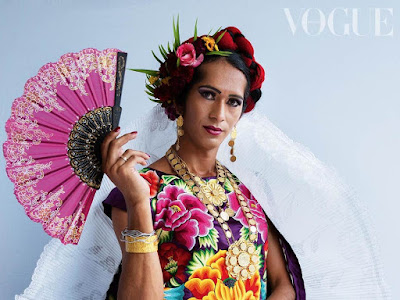 The photo marks the first instance in Vogue’s 120-year publication history that a muxe has been placed on the cover.

“I think it’s a huge step,” 37-year-old Vazquez - who had never heard of Vogue when she was approached for the shoot - said.

“There’s still discrimination [in Mexico], but it’s not as much now and you don’t see it like you once did.

“Everyone is seeing this cover, everyone is congratulating me. I don’t know; it’s just hard to make sense of the emotions I’m feeling. It almost makes me want to cry,” she added.

The full shoot, shot by photographer Tim Walker, features a dozen muxes in traditional indigenous dress and is an attempt by Vogue to highlight the remarkable singularity of muxe culture, which is specific to Mexico.

"We're delighted to collaborate with Vogue Mexico for the first time ever on this amazing fashion shoot featuring members of Oaxaca’s indigenous muxe community," a British Vogue spokesperson told The Independent.

Muxes last made international news for their prominent role in rescue efforts following the 2017 Juchitan earthquake.


Many dug through rubble with their bare hands and lead organising efforts after the disaster.

However, outside the quais-matriarchal indigenous community, minority persecution in Mexico persists, which has some of the highest rates of crime in the world against individuals who identify as LGBT.

One LGBT person was murdered every three to four days between 2014 and 2016 in the country.