A mother-of-three was inspired to create a woman-cave after realising everybody else in her family had a space of their own where they could go and "recharge".

According to Jessica Pool, 25, from Shrivenham, Oxfordshire, she began to suffer from postpartum depression after the birth of her third child.

After noticing that her children would take quiet time to themselves in their rooms when they needed to be alone, she decided to convert her cupboard under the stairs into a “mum cave”.

To create the space, Pool first cleared out the miscellaneous coats and toys. She then repainted the room teal and added a reading nook, calming candles and mood lighting with objects she had around the house.

According to Pool, the entire redesign cost just £17 - and has allowed her a place to go when she needs just five minutes of time to herself.

Explaining that at first she decided to clear the room for her children, she says she then decided to do it for herself because “sometimes us mums need somewhere we can escape to and still be near the children to look after them”. 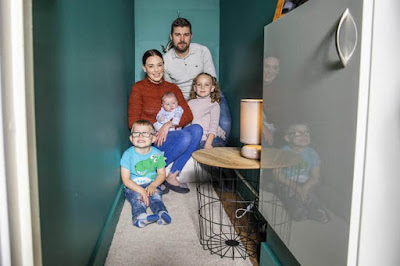 “Sometimes I’ll go take myself away for five minutes to give myself some space,” she said. “Children take themselves away when they need a break and this is somewhere I can go.

“You hear about man caves and toy rooms, but I’d never heard of a mum cave. I suffer from postnatal depression and I felt like I needed somewhere I could take myself without inflicting my mood on the children and then I can come out and be mummy again.”

According to Pool, the space is phone-free and has “drastically” improved her quality of life.

And while she told her children they are allowed into the room, she’s also explained it’s “more for me than them”.

(Source: The Independent)
Posted by Arjunpuri at 06:30