"Everyone welcomed me, the students loved me a lot. I am happy and satisfied now when I leave my job"

Arabic is a beautiful language, says Gopalika, possibly the first Brahmin teacher of the language in the country.

However, when she began to teach Arabic in 1987, there was an uproar. People said that a Brahmin person should not be teaching the language.

At the age of 17, Gopalika Antharjanam told her family that she wanted to learn Arabic. It wasn’t a big deal. “I had this passion to learn different languages. In high school, I learned Sanskrit. Our village had an institution that taught Arabic and I was interested in the language.” 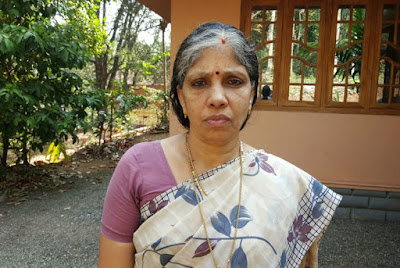 Gopalika hails from Kunnamkulam village in Thrissur district; her family were traditionally priests of the Kottiyoor temple. “My village had people from all communities, people did not differentiate between religious communities. I had classmates from different religions. Everyone welcomed me (at the Arabic institute),” she says.

There were also some other Brahmin students at the institute, but she doesn’t know if any of them took up the language as a teacher.

Gopalika may be the first Brahmin teacher of Arabic in Kerala and has taught the language for over two-and-a-half decades. Initially, though, it was difficult.

The year 1987 was a tumultuous one. She got married to Narayanan Namboothiri of Panayoor Mana that year and moved to Malappuram district where she took up a job as an Arabic teacher. However, there was opposition to her appointment: The idea that a Brahmin woman was teaching Arabic, was something unheard of. She was fired, but she decided to fight it out.

She approached the Kerala High Court and it ruled in her favour in 1989. She then joined government service through the Kerala Public Service Commission in another Malappuram school. These events caused much public and political discussion in Kerala.

“The encouragement I got from my in-laws and my husband gave me the strength to fight it out. It was because of my husband that I was able to pursue my career,” she said.

Then on, there were no hiccups in her career. “Everyone welcomed me, the students loved me a lot. I am happy and satisfied now, at the time of leaving my job," she said.

Gopalika is due to retire on March 31 as a teacher from Chemmaniyodu Government Lower Primary School, and even though she was unable to pursue higher studies in Arabic due to personal reasons, she has no regrets. “I am satisfied, happy and overwhelmed at this point,” she says with a smile.

Last year, she was honoured by a Muslim group on World Arabic Day. She says that people’s attitudes towards Arabic had grown beyond religion and caste. “Now the situation has changed. Irrespective of caste and religion, people are learning Arabic because of its scope (for jobs) and it should be welcomed,” she said. “Consider Arabic as a beautiful language rather than connecting it with a particular religion.”