The Indian women’s cricket team once again took the world by surprise with its magnificent talent. This time, all eyes are on Mumbai based Smriti Mandhana who became the second-fastest Indian cricketer to reach 2000 runs.

Mandhana crossed the 2000 run mark on November 6, when she hit a match-winning fifty against West Indies in Antigua.

She is just behind Shikhar Dhawan who has achieved the milestone in 48 innings. Mandhana is also now the fastest Indian woman cricketer to reach the milestone runs in 51 innings.

In the world of women’s cricket, she is now the third-fastest woman to reach 2000 runs in One Day International (ODI) after two Australians – Belinda Clark and Meg Lanning. 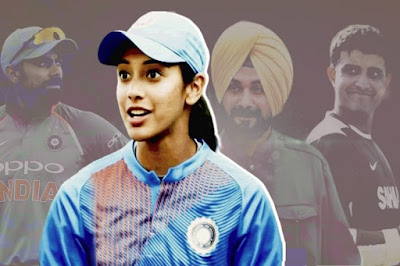 It is quite interesting that Mandhana with her brilliant knocks surpassed several bigwigs such as Virat Kohli, Sourav Ganguly, and Navjot Singh Sidhu in reaching 2000 runs.

It took Mandhana only 51 innings to cross the 2000 runs mark against the Indian men’s team skipper – Virat Kohli who accomplished the target in 53 innings.

Currently, Hashim Amla of South Africa holds the world’s record of being the fastest player to score 2000 runs in just 40 innings.

Mandhana with four centuries and 17 half-centuries has scored 2025 runs so far at an average of 43.08. It is indeed surprising that this aggressive 23-year-old cricketer, even though she missed two matches in the series due to her toe injury, managed to reach the milestone.

In her Wednesday’s match-winning knock she hit 9 fours and 3 sixes. The Indian cricket team scored 195 runs against West Indies in the final match and emerged victorious with 2-1. Along with her fellow-opener Jemimah Rodrigues, she notched 141-run partnership. While Rodrigues scored 69 runs off 92 balls, Mandhana scored 73 runs out of 63 balls. This partnership helped India cruise towards the target much easily with eight overs left.

Twitter flooded the star player with all the accolades. Most of them expressed their pride at how just 23 years of age and also being a woman, she set world records on par with men cricketers.

(Source: The Logical Indian)
Posted by Arjunpuri at 12:30