Amidst the budding patriarchal societal order, the first woman Hindu priest of West Bengal, Nandini Bhowmik became the talk of the town for solemnising a wedding ceremony, without performing the patriarchal practice of kanyadan.

“I want to do away with the patriarchal mindset where parents appear to be renouncing the custody of their Kanya (daughter), treating her like a commodity and giving her away as dana (donation),” said Nandini Bhowmik.

A benchmark for women empowerment, Nandini Bhowmik presided over the wedding ceremony of the couple- Anvita Janardhanan and Arka Bhattacharya on February 24..

What is her profession?
A Sanskrit teacher at the Jadavpur University, Bhowmik has undertaken a unique way of solemnising as many as 40 marriages over ten years.

No matter how much she is occupied in her schedule of teaching and being involved in over ten drama groups, she takes out time to perform the wedding ceremonies of most inter-religious, inter-caste and inter-ethnic couple throughout Kolkata and its suburbs. 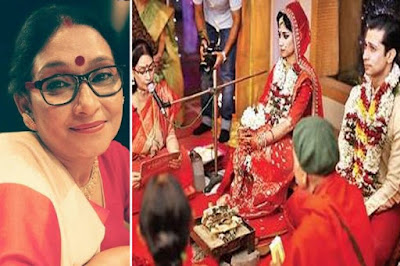 Bhowmik draws all her inspiration from her teacher, Gouri Dharmapal. In fact, whatever little she earns from her sittings, she donates most of it to an orphanage in Balighai near Puri in Odisha.

On February 24, she was accompanied by her team- college-mate and fellow priest, Ruma Roy and vocalists Semanti Banerjee and Poulami Chakraborty.

While Nandini and her team simplified the Sanskrit hymns to English and Bengali for the bride and the groom to chant, the troupe sang Rabindra Sangeet in the background.

Arka who was awestruck when Nandini and her team simplified the Sanskrit hymns to English and Bengali believed that by engaging in this practice, the women were not only breaking the male stereotypes but were also adding value to the priesthood.

“I have heard so many male priests reciting the mantras wrong. At a friend’s wedding officiated by Nandini and her friends last year, I was instantly drawn to the way the Sanskrit lines were vividly explained in English and Bengali,” said Arka.

In the holy texts
The practice of women priests solemnising weddings without Kanyadaans is mentioned in the earliest Hindu texts, especially the Rig Veda.

Thus, Nandini calls herself a “change agent”, who wishes to propagate that school of thought from the society.

From the scholars
Sanskrit scholar and Indologist Nrisingha Prasad Bhaduri said, “There is nothing in Hindu scriptures that bars women from becoming priests. In fact, there were multiple references to women priests, participating in spiritual and philosophical debates in the Vedas.”

The practice of women priest presiding over the weddings is trending among today’s youths, who have started approaching Nandini through social media.

Bhowmik, who solemnised her daughter’s marriage and then this one, will soon be seen presiding over another wedding ceremony with her team.

(Source: The Logical Indian)
Posted by Arjunpuri at 09:30