With hoodies and scarves covering their heads, a group of Japanese high school students point and whisper in awe upon entering the main hall of Tokyo Camii as Muslim worshippers prostrate beneath a glittering dome set against a bright sky.

Although there are more than 80 mosques in Japan (with 10 based in Tokyo), Islamic culture remains rather unfamiliar to many people in Japan. Furthermore, as in other countries, Islam tends to get a lot of negative press due to problems with extremist groups and religious fundamentalists. Despite this, Tokyo Camii spokesperson Shigeru Shimoyama says he has noticed a growing curiosity about Islam thanks to the influx of tourists from Muslim countries visiting and, sometimes, moving here.

As a Japanese convert to Islam, Shimoyama says that he once saw Islam as a religion of violence until he experienced the warmth and hospitality of Sudanese Muslims firsthand on an overseas trip in 1967.

“The unknown is dangerous,” says Shimoyama, who now dedicates his life to raising awareness about Islam. “It leads to prejudice and then discrimination.”

Besides holding free tours in Japanese on the weekends, Shimoyama actively collaborates with media representatives and academics looking to feature the mosque and Islamic culture in their work.

For Muhammad Ghufron Yazid, who helps to run the Tokyo Camii Young Muslim Club, social media has been crucial for building a warmer climate of acceptance and understanding of Islamic culture.

“When people think about Islam, the first thing they think about is how we cannot eat pork or drink alcohol. So they don’t know (much) about our lifestyle or beliefs,” he says.

By promoting activities centered around art and conversation, Yazid hopes to help Islam maintain its relevance to young people, and he does this with his @youngmuslimtokyo Instagram account and olivejapan.org website.

“I want to show that being Muslim is not unfashionable,” he says. 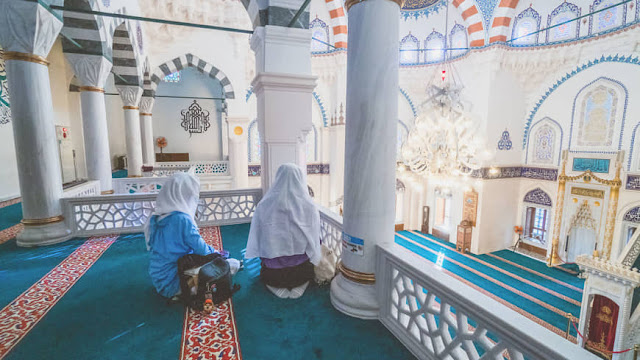 Mine Candas, who works at the mosque, explains that, just like Islam, “every school has its good and bad students … just like how there are good and bad Muslims.”

“I want people to know the real Islam,” Candas says, highlighting how the faith emphasizes values such as kindness and consideration toward others.

Islam came to Japan proper at a relatively late point in history, when the first mosques were built by Tartarian refugees fleeing the Russian Revolution in the early 20th century.

Tokyo Camii, which was established in 1938, served as a sanctuary for the Turkish community at that time. Turkish mosques are characterized by a central dome representing the unfolding expanse of Allah’s (God’s) universe. The roof, which symbolizes the “vault of heaven,” is often engraved with the holy names of Allah and his prophets.

Given religious restrictions on idolatry, mosques are inscribed with flowing Arabic calligraphy based on Quranic verses and geometric motifs that unfold in an endless repetition called the “arabesque.” Its flexible, interwoven patterns can be multiplied on any scale, symbolizing the creator’s abstract and infinite nature.

Most of the two-story mosque’s materials were sourced from Turkey and it took more than 100 Turkish craftsmen to finish building it in a year. As the original building aged over time, it was demolished in 1986 and its new structure was completed by 2000. Despite its Turkish roots, today Tokyo Camii’s congregation comprises Muslims primarily from Indonesia and other South Asian nations.

Yazid, who was raised in Japan in a Muslim Indonesian family, relates a common encounter, “If I say I’m Muslim, they will be like, “You’re not Japanese?”

“When they hear ‘Islam’, it’s not something related to Japan (or to them),” he adds.

“Japan is changing,” says Shimoyama. The seed of Islam has just started … so it is a very important time for Japanese people and Muslims to (get to) know each other.” 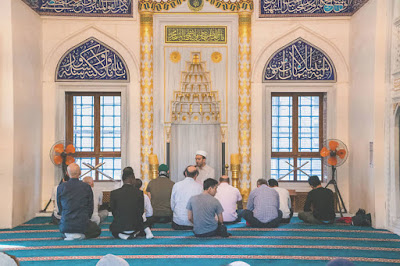 Etiquette for visits
Tokyo Camii is open daily from 10 a.m. till 6 p.m. and welcomes visitors of all faiths. As a form of courtesy, visitors should dress modestly and abstain from any loud conversations while in the mosque. Women will also need to cover their hair by wearing headscarves, which can be borrowed at the entrance of the main prayer hall.

Finally, visitors should refrain from blocking the paths of worshippers while they are praying, so as to avoid interrupting their connection with Allah.