Sridevi only actress who had conquered all nine rasas: Satyarth Nayak

Hailed as the first pan-Indian female superstar in an era which offered actresses morsels, Sridevi tamed Hindi cinema like no other. Starting her affair with the camera when she was four, this doe-eyed goddess won Tamil, Telugu, Malayalam and Kannada industries with performances etched in gold. Taking Hindi cinema by storm with Himmatwala in 1983, Sridevi rose as one of the most iconic screen goddesses of India, playing roles that went on to become cultural touchstones.

he book by Satyarth Nayak charts five decades of Sridevi’s larger-than-life magic. Sridevi: The Eternal Screen Goddess, commemorates both the phenomenon and the person Sridevi was. This is her journey from child star to one of our most excellent movie, luminaries, who forever changed the narrative of Indian cinema.
To know more about the book SheThePeople.TV invited Satyarth Nayak for a Twitter chat. He is also the author of the book – The Emperor’s Riddles. Here’s an excerpt:

What made you pick Sridevi as the subject of your book?
“I have always been her admirer,” said Nayak. As an actress she was unparalleled. She is not only our First Female Superstar but was also voted India’s Greatest Actress in 100 Years. It was appalling that there was no book documenting her five-decade-long journey, added Satyarth. Hence, his book is a tribute to Sridevi. He further shared that when he saw Gumrah, it was the way she gave her best after a flop, which made him admire her even more. “How she reasserted herself when Filmfare wrote that ‘she has uncannily returned with full force.’ That made me her fan, and that’s what I wanted to document.” 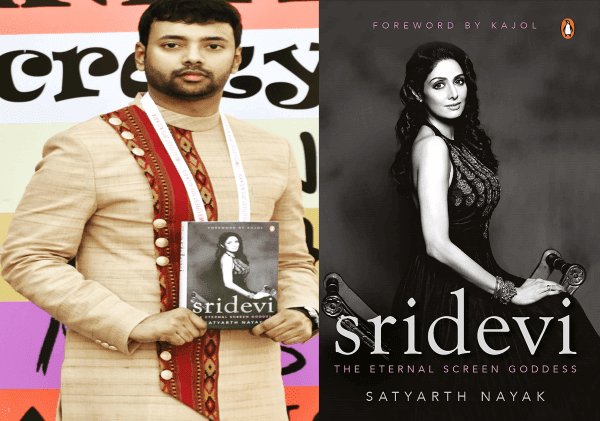 “When it’s about someone as iconic as Sridevi, the book does end up celebrating her. But one makes sure that the facts are accurate”

What makes Sridevi a superstar?
“She once asked her hairstylist why she came on the sets in dull clothes with no makeup. The stylist replied that most actresses didn’t like it if their staff came to all dolled-up. Sri asked her to put on some lipstick and said as part of her team, she always wanted her to look her best,” says Nayak. This compassion and affection made her an icon. Satyarth points out that he aimed to document her iconic journey from child star to megastar. “What you will get is her saga of how it all began for her, how she dazzled audiences down south both as a child star and leading lady. Besides the performer, you also get glimpses of the person behind it.”

Why do you think her fans loved her unconditionally?
“Her fans loved her because of the absolute magic she created on screen. She was the only actress who had conquered all the nine rasas; she could do tragedy, comedy, drama, dance. Basically everything. Her reserved nature off-screen also spun a mystique around her,” he answered.

Because, she was a magic. She was an angel who filled our life with happiness and laughters.#Sridevi #SrideviLivesForever https://t.co/LshXpBRZ76
— Leena Goenka (@LeenaGoenka) 20 December 2019

On being asked what relationship she shared with her contemporaries, Nayak responded that initially, she did find Bollywood an insulated space when she made her big entry in 1983. Also when Filmfare declared her ‘No.1’ in 1984, she could instantly sense cold vibes from her contemporaries. Those days Sri was closest to Rekha calling her “my only friend.”

Research and writing process behind the book
He recalled that his research involved two aspects. One was interviewing her colleagues both in Mumbai and down south for their memories, inputs and anecdotes. The other was his stack of film magazines filled with her interviews. Those became a significant resource for him.

Importance of being objective while writing an authorised biography
“When it’s about someone as iconic as Sridevi, the book does end up celebrating her. But one makes sure that the facts are accurate. Also, I have been critical about certain aspects of her cinema, so this book is not a hagiography,” said Nayak.

Satyarth replied that the toughest part about writing the book was her sojourn down south. Working in four languages there from the tender age of four, she had amassed an enormous body of work. “Chronicling that took time, but it also opened up so many aspects about her,” he added. “I did get emotional at many places. As a Sridevi admirer, I am sure you will identify those parts of the book yourself. Sri had once said in an interview that she liked books with tragic endings. I wish I could say the same about my book,” he shared.

“What you will get is her saga of how it all began for her, how she dazzled audiences down south both as a child star and leading lady. Besides the performer, you also get glimpses of the person behind it.”

How can Bollywood support women empowerment?
They need to write better roles for women. Give them their due wages and celebrate their stardom just as they do for the men. Sridevi had battled all that and achieved a position where she is overpowering her heroes and getting more screen-time and more money than the men, Satyarth replied firmly.

And 2 stop glorifying sacrificing mothers/daughters/wives with no identity or voice and create women characters of today.. .
— AnuMeera (@AnuMeera2024) 20 December 2019


Nayak remembers that the discussion about the book had started while Sridevi was alive and she was keen to do the book post the release of Dhadak. “Then 24th Feb happened, and I was in shock like many out there. Finally, with encouragement from Penguin and solid support from Boney sir, I put together this book as a tribute,” he stated. “Given Sri’s pan-Indian stardom, the book will hopefully be translated in Hindi and southern languages too.” He ended.