Why is a woman expected to adjust in every phase of her life?

Please adjust. How often do you hear that? At a moment of introspection, I realized that in every woman’s life, there is a transition phase where ends the carefree and innocent childhood and begins the series of adjustments that last her a lifetime. This transition is crudely labelled as adulthood, although it is heavily gendered. During this transition, a woman is torn out of her childhood and forcefully pushed into adulthood. The first periods and a maturing body raises alarms bells as the society begins piling norms on her, no matter if the girl is even mature enough to to put on her buttons correctly. It is from this time that she is made to realise that growing up as a girl means to adjust your clothes, the tone of voice and the way you walk and sit, to put care above career, children over yourself and so on. It is the first stage of training women to live according to patriarchal norms. And it’s often wrapped in two perfectly normal words, Please Adjust.

RAISING QUESTIONS
When the young girl moves towards college and career
Seeking higher education in such a controlling environment also becomes a struggle for women. Firstly, they are encouraged to adjust their expectations and opt for colleges and courses available close to home. Even if they are able to move to other cities, they must ensure to safegaurd their parents’ trust and reputation. 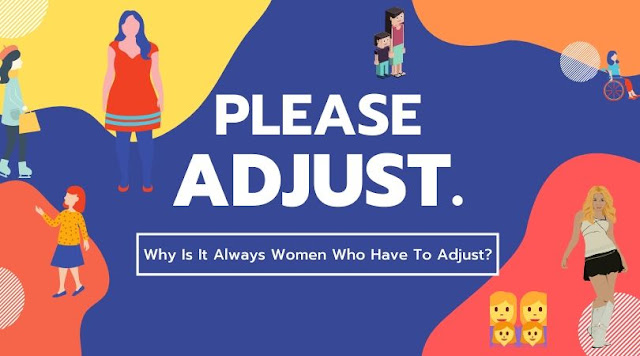 Parents are way too conscious about their daughters that a simple mistake becomes as large as betray of trust.

Nitali Kumari, a first-year medical student from Kolkata says, “Living away from home for studies hits hard not much for the homesickness but the fear that my parents’ trust, which suddenly becomes so fragile, will be betrayed. I never go out with my friends, or agree for a night stay without my parents’ permission.” Parents are way too conscious about their daughters that a simple mistake becomes as large as betray of trust. This conscious behaviour is because society views women as ideally pure and clear of the spots of worldly dust. This also makes them the bearers of family’s respect and reputation.

The vigilance and restrictions are also shared by the landlords of the houses where women stay while away from home. The time restrictions, no male friends allowed, no parties are all because they assume it is their responsibility of taking “care” of the woman as she cannot do it herself. Besides, they will be answerable when anything wrong happens to women. These restrictions make it really difficult for women to live anywhere without being judged by their landlords. All these restrictions that aim at “taking care” of a woman enclose her in a box where she is not even allowed the basic freedom in life. Even if women are allowed the freedom to go out and live on their own, they never really step out of the control of patriarchy and it is sad how the parents themselves become the carriers of patriarchal stereotypes and make sure that their daughters comply with it.

When women are finally able to finish their education and earn a job, the saga of adjustments follows them to the workplace also. She faces discrimination and is expected to adjust because of her gender. Puja Kumari, a Game Developer from Pune, says, “At workplace, a woman is always scaled down based on her gender. Any important task is not assigned to her because it is assumed that she cannot work late and bear the workload. Even if she is as qualified and capable as her male colleague, the important opportunities are handed over to men. Besides, a woman always has to be careful about her male colleagues and how they behave with her. These adjustments make her feel inferior at times and less capable.”

The stage where marriage comes in
While a woman is still adjusting to the patriarchal norms and giving up basic freedom to not upset her parents, she is simultaneously being “trained” for marriage. Why does marriage become a crux of existance in a woman’s life? Even if she is sent for her education, it is bound to a time limit by which she should be married. Many women are not allowed to take up a career that requires long term of education. While others are told to get married and then continue their studies.

In a subtle way women are told that career isn’t to be their priority in life, over family. Aashima, 21-year-old MA English student at DU says, “Being the first child of my parents, I am a target for the entire society. I am often told that I am the ‘honour’ of my family and that I should soon get married. The idea itself of getting married at such an early stage is disturbing not only for me but for every woman.”

I wanted to study law and become a criminal lawyer. But when I asked my father to enroll me in for the course, he denied. He said that society does not consider the profession safe for women and a woman from a law background is not considered fit for marriage. – Sushma Buswal

Marital prospects also becomes a factor of deciding which career a woman should opt for so that her in-laws would not frown upon her and she has a good married life. It is unbelievable how marriage makes the decisions in life that a woman should get the agency to make, based on her aspirations. Sushma Buswal, 21-year-old MA English student at DU says, “I wanted to study law and become a criminal lawyer. But when I asked my father to enroll me in for the course, he denied. He said that society does not consider the profession safe for women and a woman from a law background is not considered fit for marriage. He asked me to reconsider my choice and it was then that much more than an adjustment, I lost myself.”

Even after marriage a woman has to adjust her work-life so that she can manage both marriage and work together.  Often she has to leave her previous job and migrate to the place where her husband has a settled life. Moving to a new place, leaving a well-settled job is what everyone hates to do. It is difficult to start over again, look for a job and adjust in a new place. But for a marriage to work out, one of the two has to sacrifice and move. But, why the onus of the sacrifices is always on women?

Puja Kumari, Game Developer, said, “To get married I had to give up my job in Pune where I was working since the last three years. It is unthinkable to leave a well-settled job and pay, and move to a city and start everything from scratch. But  a duty that I have to perform no matter what. Besides, from the experience of my sisters, I am quite sure that I will need a backup plan for my career because managing my work and  child together will not be easy. I can’t abandon my child but leaving my career is equally a nightmare”

When she becomes a mother
Many women have to give up their job once they embrace motherhood because first, the responsibility of the child is mostly on them and second, many firms do not have the right maternal leave policies. It is important that the child is brought up by parents and that’s why keeping the work aside becomes inevitable. But, this should not be a difficult choice to make. The firms, along with employing more women, should frame friendly policies for maternal and menstrual leaves. Relatives and partners can also help working women by step in as caregivers, instead of expecting them to bear the duties solely by themselves. If the society and families join forces then women then will be able to manage motherhood and their careers well and not settle for some back-up plans.

It is easy to tell women to adjust for the society as it still sides with men as the superior gender, shielding them from any change in mindset., However, many men are now embracing feminism to be better fathers, brothers and partners. Women themselves too have stopped internalising gendered social norms and are now questioning them. Hopefully, they won’t have to adjust in every aspect of their lives for sake of security and appeasement in the future.