The 3rd of December, 2018 marks the 34th anniversary of the Bhopal Gas Tragedy. Hundreds and thousands of lives were lost that fateful night when over 5 lakh people were exposed to methyl isocyanate (MIC), an extremely toxic gas after a leak at the Union Carbide Plant in Madhya Pradesh. Claims regarding the total number of deaths in the tragedy vary from over 5,000 by the government to over 15,000 by activists. Regardless of the uncertainty surrounding the total number of casualties, it is regarded as one of the worst industrial disasters across the world.

Warren Anderson, CEO of Union Carbide Corporation (UCC), was considered widely to be guilty of slack maintenance in the plant that led to the disaster. Eight former plant employees were eventually convicted in June 2010 but by then, the Court had declared Anderson an accused and an absconder. With assistance from prominent political players in the corridors of power, Anderson had fled the country merely days after the disaster, never to return.
Some say the Americans had built significant pressure on the then Prime Minister Rajiv Gandhi to release Anderson after he was arrested and detained at the Union Carbide Guest House. “We arrested him on the basis of a written order but released him on an oral order,” said Swaraj Puri, Bhopal’s Superintendent of Police in 1984. He claimed that the oral order came from “higher-ups”. The pilot who flew Anderson from Bhopal to Delhi on the 7th of December revealed that the aircraft was authorized by the then Chief Minister of the State, Congress politician Arjun Singh, as per the journey log book.

Others say that Rajiv Gandhi allowed Anderson to flee on the basis of a quid pro quo arrangement for the release of his childhood, Adil Shahryar, who was serving a 35-year sentence in the USA. Sharyar was the son of Muhammad Yunus, an Indian civil servant and former ambassador to Turkey, Indonesia, Iraq and Spain. Yunus was a close associate of Jawaharlal Nehru and Indira Gandhi.

Shahryar was found guilty on five counts, including felony and fraud, by a Florida District Court. He was held guilty of attempting to firebomb a ship and was charged with defrauding shipping authorities and the American Express International Banking Corporation.

In a memorandum to the Attorney General from John Roberts, the AG’s special assistant, the latter emphasized on the gravity of the charges against Shahryar. He wrote, “Adil was tried in federal court, before a jury, on 5 counts: (1) attempting to firebomb a ship; (2) false statements on various certificates in connection with the shipment; (3) mail fraud; (4) making of a firearm (the bombs); and (5) the use of a firearm (the bombs) in the commission of a felony. The case was airtight: evidence linked Adil to the purchase of the bomb materials, and he had only an incredible story attempting to pin the blame on two associates to present in defence. He was convicted and sentenced, after a sentencing hearing, to 35 years.

The judge indicated he viewed the attempted firebombing of the ship as very serious. Adil had what the prosecutor described as a “superb” defence attorney during the trial, though Adil fired him before the sentencing hearing. The original state arson charges are still pending against Adil. The assistant U.S. attorney who tried the case concluded that Adil was “dangerous and deserves every day of the 35 years he got.”” 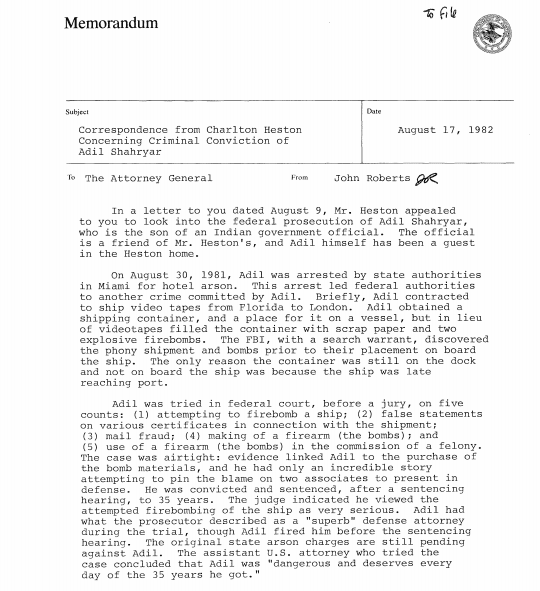 Hollywood actor Charlton Heston had requested the then Attorney General William French Smith in 1982 to intervene in the matter. The Attorney General, however, after his assistant’s memorandum, flatly refused to consider the gravity of the charges against Shahryar.

He said in his letter to the actor, “I am afraid, however, that it would not be appropriate for me to intervene in this matter in any way. Mr Shahryar was convicted of serious crimes after a full trial before a jury of his peers, and was sentenced by the judge according to law.” 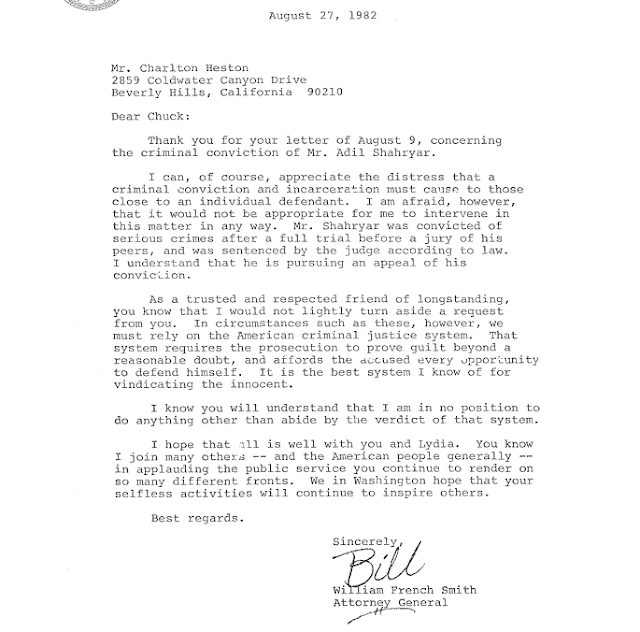 Not too long after Anderson fled India to escape trial, then U.S. President Ronald Reagan issued Shahryar a Presidential pardon. And he returned to India soon after. The escape of Warren Anderson is still considered a great betrayal of the victims of the tragedy. He eventually died in September 2014, not having suffered any consequences for his alleged role in the tragedy. Rajiv Gandhi’s desire to prioritize the release of his childhood friend, a person who was convicted of extremely severe charges, may well have ensured Anderson’s release and subsequent escape.

According to another theory that has been floating around, Muhammad Yunus had threatened Rajiv Gandhi that if he was unable to secure Shahryar’s release, then he would reveal damning secrets about Nehru’s involvement in the Netaji mystery. “Yunus threatened Rajiv that he would unmask his grandfather in the Netaji matter if he did not seek his son’s release,” the late Pradip Bose, nephew of Netaji Bose, apparently said.

Whether there was actually a quid pro quo involved where Rajiv Gandhi felicitated the escape of Anderson to secure the release of his convicted childhood friend, we may never know. Whether his eagerness to embrace the quid pro quo was motivated by a desire to protect the legacy of his family rather than any affection for a friend, we may never know. But given the murky history of the Nehru-Gandhi family, there may well be more to the matter than meets the eye.