‘It walked right up to me ... and climbed up onto my bike while I gave him water,’ says rider

A dehydrated and confused koala approached a passing cyclist in what appeared to be a call for help, as a heatwave and wild fires continued to grip Australia.

Anna Heuseler was with a group of cyclists heading towards Adelaide in temperatures of up to 40C when they spotted the animal sitting in the middle of the road.

The koala hurried over and drank thirstily when offered a water bottle, even clambering onto Ms Heuseler’s bike to take big gulps.

Sharing the footage on Instagram, she wrote: “This koala walked right up to me as I was descending and climbed up onto my bike while I gave him water. Best thing to happen to me on a ride ever.” 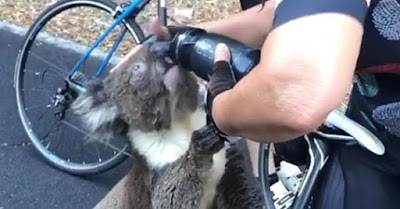 The mid-north coast of New South Wales is one of Australia’s most populous koala habitats, estimated at 15,000-28,000.

But ecologists fear up to a third of those – as many as 9,000 – could have been killed in the fires, according to Sussan Ley, Australia’s environment minister. Those that survived the heat, flames and habitat loss have been left desperately searching for food and water.

The experts believe 480 million animals could have been killed since the start of the devastating fires in September, which have burnt more than 5 million hectares (12 million acres) and killed eight people.

Ms Heuseler told 7News it was not uncommon to spot koalas out in the bushland, but she had been surprised by this animal’s reaction. “We’ve seen literally hundreds of koalas over the years [but] we have never seen a koala do this.

“We were descending from Norton Summit Road back into the city early this morning and we came around a bend and there was a koala sitting in the middle of the road. Naturally, we stopped because we were going to help relocate him off the road.

“I stopped on my bike and he walked right up to me, quite quickly for a koala, and as I was giving him a drink from all our water bottles, he actually climbed up onto my bike. None of us have ever seen anything like it.”

After giving the animal water, she led it away from the road, back to the scrubland.

The bushfires in the Adelaide Hills have burnt 25,000 hectares of land and left koalas.

Three weeks ago, an ecologist told an official inquiry that thousands of koalas had been killed, and the fires were so large their bodies would probably never be found.

Fires tore through the mid-north coast in November, and further emergency-level blazes have since flared in NSW near Sydney, on the NSW south coast, in South Australia, Victoria and Western Australia.

But even before the bushfire crisis, koala populations in NSW and Queensland had already dropped by 42 per cent between 1990 and 2010, according to the federal threatened species scientific committee, The Guardian reported.

Jane Brister, of Adelaide Koala Rescue, which is caring for 46 rescued koalas, said: “A big problem we’re noticing now is koalas are coming in starving… there’s just no food.

“Part of the problem is there’s often at least four days until someone finds them.”

Thousands of eucalyptus trees – the animals’ staple diet – have been destroyed by fire.