Al-Jemail or Ghost Town in Qatar


After seeing the Al-Zubarah fort and town we headed towards Ghost Town aka Al-Jemail, one of the abandoned fishing villages. We saw this village while going to the fort and it is about 600 metres away from the road. The other two abandoned villages along the north coast of Qatar are Al-Khuwair and Al-Areesh. Both are down the road to Al-Zubarah from Al-Jemail. The village’s entrance is indicated by a signboard which says it is a heritage site.

All the three villages were built at the beginning of 19th century and their names have intriguing origins. Al-Areesh comes from the Arabic “areesh,” which means shelter made by date palm fronds, while Al-Kuwair comes from “kuwair,” meaning small seawater canal. These villages were first abandoned in 1937, but daily life resumed in 1945 and continued well into the 1970s when the residents once again abandoned them.


After parking the car near the entrance of the village we walked to the beach. Then we entered Al-Jemail ruins and found a mosque standing still in the middle of a few old fishermen’s houses, mostly in ruins, theirs walls, made of stone and shells, collapsed.


The mosque at Al-Jemail had a typical plan, fenced by high walls and open to an internal courtyard. We saw a room in the courtyard and Umer and Sajid explained that it was a “mothawaddah,” a separate room for the “wudu” or ablutions.

In one corner was a minaret, a circular shaft with a simple rounded top and a small arched door that opened to a narrow spiral staircase. On the top of the minaret, a small room opened to the surroundings with four little windows that were used by the “muezzin” to call people to pray. All of us climbed the minaret using the small staircase and saw the surroundings.
The prayer area of the mosque was split into two spaces: An “iwan,” or outer prayer room consisting of a portico overlooking the courtyard, and an indoor prayer area where the “mehrab” was directed towards the “Kaaba” at Mecca. 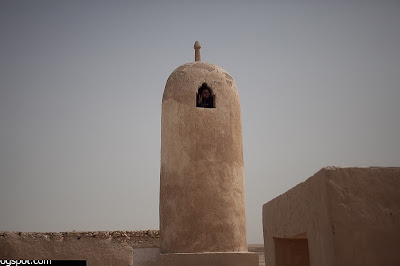 After visiting these villages, we got a clear idea of the traditional Qatari building technique. The thick walls, helped to keep away the heat and keep buildings cool. They were constructed by overlapping raw pieces of coral rock and limestone, joining them with mud mortar and covering them with gypsum-based plaster.

The roof was made of four layers. The first consisted of a series of “danchal” wood poles, often protected by bitumen. The second was a layer of “basgijl,” which were woven bamboo strips. A close net of mangrove branches made the third layer, and the roof was then finished with a layer of compressed mud, which provided protection from the sun during the hot seasons.

One of the most interesting features of this technique was building epistyles using poles of “danchal” wood held together with a rope. This increased the adherence of the mud mortar and plaster.

Then we saw a stone building of a school, stone walls of houses, graffiti on walls and other ruins in the abandoned village.

We had passed lunch time when we left the place and we stopped at Madinat Al-Shamal to buy some snacks and had a stroll at a beautiful park in Madinat Al-Shamal before heading towards Doha.
Posted by Arjunpuri in Qatar at 09:42