After seeing Al-Zubarah fort, we went to the Al-Zubarah town where excavations by the Department of Antiquities in Qatar were conducted in the 1980s and 2002-2004 uncovering two housing complexes, a section of the perimeter fortifications, a souq area and an industrial complex.

On the way we saw many camels. The road to the town and the beach was quite bumpy. We had a doubt if Umer’s sedan would make it and yes, we reached the place. First we went to see the beach and we found lots of shells and empty bottles on the shore.  We drove towards the coastline, about 200 meters past the Al-Zubarah fort and entered Al-Zubarah town through the first gate. Then we followed the path until we found the excavated areas. 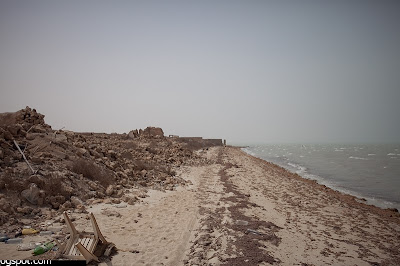 Then we entered the town. We could see clear evidence of town planning, and three large courtyard houses with walls that screened the inner courtyard from the gaze of visitors, decorative architectural details, and several bathrooms. The remains gave us an impression that the inhabitants enjoyed a high standard of living.
There was a large construction, which has been dubbed by the archaeologists as ‘the palace compound’. This fortified compound mostly housed the ruling elite. It also features decorated gypsum panels and date presses.
We found many evidences of ‘madabes’. These structures were used to produce ‘debis’, a date-based syrup and part of a traditional Gulf diet. The rooms have parallel channels 10 cm deep into the floor which are linked together by a perpendicular canal near the entrance that funnels into an underground pot in the corner. During the process of making ‘debis’, palm fronds were laid on the channels, creating a smooth, flat base. The dates were then put in sacks made of palm leaves and laid on top of each other in piles that could reach two metres high. The weight of the upper sacks thus squashed the dates in the lower sacks and their thick juice ran into the channels of the so-called ‘mudbasa’ and eventually into the sunken collecting pot.
Posted by Arjunpuri in Qatar at 09:57