This book visits the sites of India’s civilisations to reimagine 4,000 years of history

Namit Arora combines the evidence gleaned from travel and research to draw informed conclusions in ‘Indians: A Brief History of a Civilisation’.

The book Indians: A Brief History of a Civilisation offers an unusual saunter through more than 4,000 years of India’s history. The milestones on the journey on which Namit Arora takes us are wondrous yet oft-ignored locales including Dholavira, Pataliputra, Nagarjunakonda, Nalanda, Khajuraho, Hampi and Varanasi.

As guides in addition to himself, Arora enlists history’s well-known travellers from other lands: Megasthenes from Greece, China’s Xuanzang, Central Asia’s Alberuni, Marco Polo the Italian, the Portuguese who visited Vijayanagara, Bernier the Frenchman, and more. Meeting the reader in chronological sequence, these travellers’ accounts form part of this 296-page book, along with Arora’s own reflections and comments, including those on philosophical debates and architectural puzzles.

The net result is a sobering assessment that greatness in our land was joined far too often by callousness and neglect, even though elements from the past continue to strike awe in the reader’s mind.

Arora is someone who abandoned his Silicon Valley perches (for which IIT Kharagpur had equipped him) for his love of India’s irresistible places. Also in play, it would seem, was a thirst in the writer to understand the springs of India’s history as also the statics/dynamics of Indian society. Pulled, too, by the capabilities of the camera – which, going by the book’s stunning colour photographs, he wields with great skill – Arora has repeatedly visited the celebrated landmarks.

He has studied these places intensively and reflected deeply on them. He scrutinises the aforementioned travellers even as he quotes them. In Indians, we see these observers in their national contexts too, not just as reporters of India, and thus glimpse their likely motivations.

But it’s more than the camera or the travellers. The book’s quotes and notes confirm to us that Arora has absorbed what a great many other scholars have written about these places and their histories. He also feels free to offer his own takes, and why not?

A refreshing feature in Indians is Arora’s effort to imagine the life and bustle of each locale in its heyday. After providing recorded perspectives and knowledge extracted from archaeology, Arora daydreams a bit. These short reveries where the past is recreated for the reader appear plausible and lifelike. Here, to give an example, is Vijayanagara’s large-scale construction activity in the 14th and 15th centuries:

“I imagine labourers, masons and sculptors doing the hard, back-breaking work of quarrying, moving, cutting, shaping and raising stones with the basic technologies of the day: chisel and hammer, ropes and ramps, human and animal muscle. Countless must have died in accidents.”

Earlier, depicting how Chinese travellers during a period of three centuries (“400 -700 CE”) ended up enlightening Indians about India, Arora makes a different point: “Many Indian monks also went as missionaries and scholars to China but none of their observations have come down to us.” While the world has always described India, why is it that Indians, exceptions apart, have shown little interest in portraying the peoples beyond their borders, even when living amidst them?

Providing history’s dates with seeming certitude, Arora is similarly unequivocal and bold in his appraisals and assertions. Where the exact date or duration of a past exercise remains unknown, scholars are certainly entitled to offer their considered estimate, even if it’s a rough one. And if after examining arguments for or against a particular position, a scholar reaches a conclusion, there is something to be said for offering that conclusion in clear and even categorical language. Which is what Arora does.

How Buddhism was swept aside in India, including by being absorbed in Hinduism, is part of the history Arora examines. His historical tour also shows, sadly, that sati was an old and indigenous practice, recorded in the first century BCE, not something forced on Hindu society by aggressive Muslim males, whose religion entered the Indian scene many centuries later.

Of Alberuni’s famous text on India, written “around 1030” after the author spent “most of thirteen years” in India and learnt much (including Sanskrit), Arora says: “Alberuni approached India like a scholarly journalist… [His] is the work of a deeply intelligent, curious and decent mind.” Arora reminds us that Alberuni ended his book by writing, “We ask god to pardon us for every statement of ours which is not true.”

Some of Arora’s binaries may be too sharp. In his chapter on Varanasi, the city of (among so many others) Kabir, Ravidas and Tulsidas, Arora places Tulsidas in one column of “personal piety” and “the status quo”, and Ravidas and Kabir in an opposed column of “a casteless and classless society”. In countless homes, such a conflict was unknown or ignored. Many Indians were (and I hope are) raised on the similarities in the devotion and thought of these amazing poets. We learnt the songs of all three.

In Indians, caste seems to emerge as Indian society’s principal characteristic and bane, but coercions and oppressions within “low” castes are also visible. Much was indeed golden in India’s history, but was there a golden age that foreigners destroyed? Unfortunately, Arora’s long “tour” does not reveal any sizeable period when most of India gleamed. 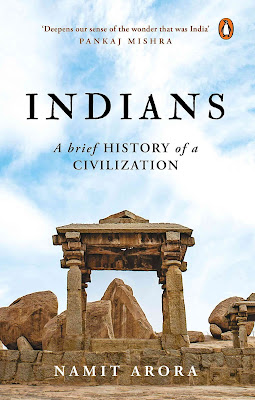 Painstakingly researched, Indians is a pleasure to read. Significant arguments accompany the utterly fascinating information showered by it. Any rival history that wishes to refute this book’s conclusions had better find credible dates and solid evidence, for Namit Arora has set a high bar.