Bhagat Singh wasn’t just hanged, but was chopped and stuffed in sacks

In ‘The Execution of Bhagat Singh’, Satvinder Singh Juss writes how Bhagat Singh’s hanging was ‘one of the bloodiest deeds ever undertaken by the British Labour Government’.

The time for execution was unusual. It was not at dawn but at 7.30 p.m. in the cool, crisp evening of 23 March 1931, just as twilight was setting in. This was when the Chief Superintendent of Central Lahore Jail, Major P. D. Chopra, escorted a lean, sinewy young man of twenty-three years to the raised scaffold in the grounds of the jail. Looking on, a bewildered Deputy Jail Superintendent, Khan Sahib Mohammad Akbar Khan, struggled in vain to choke back his tears. The lush green trees outside the jail swayed in the gentle wind. Bhagat Singh was the condemned man. The most famous man in India. He grasped at the rope as it was brought near. Despite the deprivations of prison life, his face was still handsome. Undaunted and undeterred by the fate that awaited him, his hands dug deep into the fibrous strands of the braided, twisted piles of yarn which were about to extinguish his life. Bhagat Singh kissed the hangman’s noose. It was an occasion he had longed for, waited upon, and even planned. Calmly, assuredly, and with a wry smile on his face, he took a quick glance sideways in both directions. He then airily placed the noose around his neck. Before he knew it, the noose drew in and fastened tight around his throat. The trapdoor fell open under his feet. His body cascaded. The plunge snapped his neck in two. Bhagat Singh was hanged.

Two of his comrades, Sukhdev and Rajguru, met with a similar fate at the same time in what became known as the Lahore Conspiracy Case. They too went to their deaths defiantly. All three had requested that they be executed by firing squad due to their status as political prisoners, and not hanged by the neck as common criminals; this had gone unheeded. Bhagat Singh had walked in the middle, with Sukhdev on his left and Rajguru on his right. It was not too difficult to see why they felt so elated, because as they had walked the path to the gallows Bhagat Singh sang out a verse. The other two joined in: ‘Dil se niklegi na marker bhi watan ki ulfat / Meri mittee se bhi Khushbue watan aegi’ (‘When we are dead there would be still patriotism left in us / Even my corpse will emit the fragrance of my motherland’). On the scaffold, Sukhdev and Rajguru also kissed the hangman’s noose. They too tumbled down the trapdoor with a heavy thud, dying instantly. It was all over so quickly.

Afterwards, their bodies were hurriedly taken down from the gallows. They were dragged along the dirty passageway, chopped into pieces and stuffed into sacks, which were then whisked out of the jail compound surreptitiously. Outside the jail, the remains were unceremoniously stacked on a truck. The truck made haste, speeding northwards from Lahore to Kasur, some two hours’ drive away. There, on the banks of the River Sutlej, two holy men awaited. The harried men, dressed in full priestly garb, clutched their prayer books for solace. One was Sikh and the other Hindu.

The priests read out the final prayers over the dismembered bodies, which were quickly loaded onto a funeral pyre to burn fiercely in the eerie silence of the night. Before the pyre had fully burnt out, and as dawn threatened to break over the silent waters of the Sutlej, the roaring fires were hastily put out. The charred remains were then hurled into the river. The precise spot was to be later identified as Post No. 201. Once the priests and the policemen had departed, villagers who had been looking on with suspicion went into the water. They retrieved the body parts and set about cremating them properly. Having always been of the people, it was the people who gave Bhagat Singh, Sukhdev and Rajguru the dignity in death they already had in life.

Public outrage erupted on the streets as news of the hangings swept the country like wildfire the next day. Unbeknown to everyone, the time of the execution had been secretly brought forward by eleven hours. The three young men had been due to be hanged the next day, at dawn on 24 March 1931. The public, which had expected a commutation of the death sentence, felt doubly cheated. The result was immense anger everywhere. In New York, on the other side of the world, the Daily Worker denounced Bhagat Singh’s hanging as ‘one of the bloodiest deeds ever undertaken by the British Labour Government’. Gandhi, visiting Karachi at the time, was blamed for not intervening.

As his train slowly shunted in at the railway station and he disembarked, inflamed protesters thrust clusters of black flowers into his hands – not the usual red or white flowers used to commemorate the arrival of a much awaited dignitary. He was branded with ignominy for not demanding commutation of the sentence of death from the Governor-General, Lord Irwin, as a condition of any further talks on the future of India. This ultimate stain of dishonour was one Gandhi never succeeded in removing during his lifetime.

In faraway London, a month earlier, a tenacious forty-four-year-old British lawyer by the name of Dennis Nowell Pritt had taken a taxi to Downing Street on a dank, misty February morning. He had gone there to argue the appeal against the sentence and conviction of Bhagat Singh and his two comrades. It was the last straw. All else had failed in India before then. The appeal was made before the Judicial Committee of the Privy Council, the highest court in the realm. The Privy Council was used to hearing appeals from thousands of miles away in the far-flung corners of the British Empire, from the Caribbean to Australia. It was the British Empire’s court of last resort. Situated just off Whitehall, and a few minutes’ walk from the Houses of Parliament, it was within shouting distance of the Prime Minister’s office at 10 Downing Street, where Ramsay MacDonald, the first Labour Party politician to become Prime Minister, now resided.

When Pritt strode into Downing Street he knew what was at stake. If he could not persuade the Judicial Committee of the Privy Council that Bhagat Singh, Sukhdev and Rajguru had been wrongly tried and convicted, they would most certainly hang in India. Pritt knew he faced an uphill struggle. The judges were not going to be sympathetic. Their demeanour before him vacillated from giving the appearance of apoplectic outrage at the temerity of Pritt’s audacious submissions to falling asleep. In the Privy Council (as with what was then the Judicial Committee of the House of Lords but is now Britain’s Supreme Court), a single lawyer must face five judges who may interrupt, harangue or cajole him at any time to throw him off balance. He must possess immense lawyerly legal skill and presence of mind to have any chance of winning on his arguments.

In Bhagat Singh v. The King-Emperor the Judicial Committee of the Privy Council did everything in its power to break Pritt’s resolve as he heroically attempted to defend what the judges considered to be the indefensible. Together with Sukhdev and Rajguru, Bhagat Singh had been charged with conspiracy against the King. Pritt was not yet a veteran of defending conspiracy trials, but this case ensured that he would soon become one. His reputation would span the length and breadth of the British Empire. Bhagat Singh’s case was going to be his baptism of fire.

Pritt was defending someone who had shot a twenty-one-year-old probationary police officer, John Saunders, as he came out of a police station in Lahore. He had been mistaken for James Scott, the police superintendent whom the alleged conspirators blamed for the beating to death of Lala Lajpat Rai on 17 November 1928 after he led a protest march against the Simon Commission in Lahore barely three weeks earlier. The cold-blooded assassination of the young Saunders was hard to defend. As fate would now have it, Pritt’s name was to be forgotten. Bhagat Singh was to be forgotten. That there was ever such a case in the heyday of the British Empire, testing its commitment to the rule of law, was to be forgotten. Almost everyone associated with the case has been forgotten. 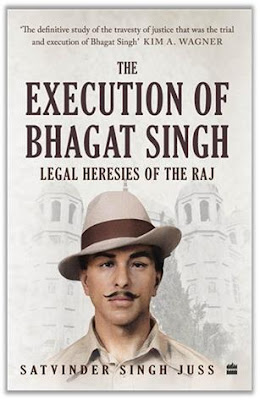 This excerpt from ‘The Execution of Bhagat Singh: Legal Heresies of the Raj’ by Satvinder Singh Juss has been published with permission from HarperCollins India.