Did the Namboodiris change Malayalam to add Sanskrit elements to the language?

An excerpt from ‘Wanderers, Kings, Merchants: The Story of India Through Its Languages’, by Peggy Mohan

[Earlier] we imagined a place in the north-west of this subcontinent where a local Dravidian population – remnants of the Harappan Civilisation that had unravelled a few centuries earlier – was joined by men coming in small groups from the Eurasian Steppe about 3500 years ago, speaking a vernacular variety of the Sanskrit we find in the Rig Veda.

Our main source of support for this scenario, along with recent Y-DNA studies, is the Rig Veda itself, which is full of the poetry the migrant men composed, but which tells us nothing about the languages spoken by the people they met, except to say that their speech was “garbled”. The sounds of the local languages were unfamiliar to the Vedic men, sounds that must have found their way into the local accent when local people tried to speak Sanskrit.

We know that the Vedic men were patrilineal, because they had patronymics, while the local people they met must have been matrilineal, and were referred to by matronymics. From what we know of contact situations in other parts of the world, and Dravidian features that have survived in the sound systems of languages now spoken in the North-west, we can expect to see strong signs of an old Dravidian gene pool in the people now living in the North-west.

Indeed, local Dravidians should have greatly outnumbered the Sanskrit-speaking men, at the time of first contact, as agrarian communities tend to have high population densities, though the history we get to see is from the victors’ point of view, omitting the details of the people they engulfed. Meanwhile, the other local people would have continued to live on the fringes of this population merger, unchanged in their genetics and their language loyalty.

This scenario is not far-fetched. It is the story of many countries in the New World: think of Mexico, for example. Local communities were engulfed by Spanish conquistadores who were almost totally male, creating “mestizos” – children whose mothers were local and whose fathers were Spanish. And on the fringes of this mixed community were people who were fully indigenous, many of whom learnt Spanish while preserving the old languages.

There is a place in India, all the way down the western coast, where we can still see an echo of the old North-west of our imagination: Kerala. Malayalam, the language of Kerala, is part of the Dravidian language family, though it has grown a thick top coat of Sanskrit. These Sanskrit words have been adapted to the sound system of a Dravidian language in exactly the way the first Prakrits spoken by the earlier people of the Rig Vedic North-west were.

The presence of Sanskrit in Kerala traces back to the arrival of Namboodiri Brahmins in the region around the eighth century CE, on the invitation of local kings who offered them tax-exempt land grants under a system called janmi if they performed śrauta fire rituals, rooted in the Vedas. These rituals were done in order to legitimise the kings’ status as rulers, while the ownership of landholding temples and the attached villages allowed the Namboodiri Brahmins to become a major force in the socio-economic life of the region.

Namboodiri Brahmins were patrilineal, and they also followed rules of primogeniture. That is, the eldest son was to marry a woman of his own caste and keep strict control of the family land as it passed from generation to generation. However, the younger Brahmin sons were not allowed to marry within their own caste and have Brahmin children, as that would fragment the landholdings. They could instead have sambandams, marital arrangements with Nair women, who were from the same caste as the kings, while the Nair men were engaged in battle far away.

Nairs were matrilineal, so this allowed younger Namboodiri men to go on living as Brahmins in their own homes and never actually move in with their wives, while these women stayed on in their original family homes and brought up the children of the relationship as Nairs. In time, nearly all the kings of Kerala had Namboodiri fathers, though they themselves were Nairs.

The Namboodiri Brahmins knew Sanskrit, being the community that was entitled to recite the Vedas, and they had a rich tradition of recitation. This ensured that pronunciation, down to the uniquely Vedic pitch accents, remained absolutely pristine. While that would make them essentially fluent speakers of Sanskrit, it is hard to see them as native speakers, since long before the eighth century CE Sanskrit had moved on from being a first language.

There is no real evidence of what the Namboodiris spoke in their daily conversation when they first reached Kerala – not surprising, since we also know nothing at all about the vernaculars used by the old Rig Vedic migrants. Less literary languages do tend to get ignored in the writing of history. What is known about them is that they came from the North, and that they travelled to Kerala along the west coast, transiting through Gujarat and Maharashtra.

It is hard to imagine that the Namboodiris were too different from other Brahmins of their time. They would probably have spoken a Middle Indo-Aryan dialect from their original homeland, the sort of variety that in Sanskrit is called an Apabhraṁśa, which only means a “corrupted” language that did not follow the norms of Pāṇinian Sanskrit.

It would have included Sanskrit-linked vocabulary with the Dravidian-inspired phonology of the early Prakrits: not the original Sanskrit words, tatsama (“the same as” the original), but words from Prakrit which had passed through the crucible of evolution, and were tadbhava (“born from” the original words, but now mutated).

This would mean that the Namboodiris knew both Sanskrit, which they used in their Vedic recitation, and a more modern dialect with Prakrit words already adapted to Dravidian phonology. This dialect might have had an affinity to early varieties of Marathi, spoken directly to the north of Kerala, in a region that already had a strong Brahmin presence.

Soon the new migrants, despite their wealth never a large and growing community, would have had to pick up the local language, Malayalam. And since the place of Malayalam in their lives would have been essentially the same as that of the Apabhraṁśa they had come with, and since their relocation to Kerala was permanent, it would have made sense for them to move on from the old Apabhraṁśa and switch to a new first language.

There is no trace in the literature of their original vernacular to suggest that it persisted, and Sanskrit – a literary language learnt only after infancy – was not an option as a first language either. It is common for migrant groups to give up their vernacular languages. When they shifted to Malayalam, however, they would have infused it with tadbhava words from the Apabhraṁśa they were speaking earlier. And later when they moved on to writing in Malayalam, they brought in the tatsama Sanskrit words that, they felt, were more suited to the rarefied world of literature.

Malayalam is, despite this, a Dravidian language. Its basic DNA did not change with these superficial additions. In its syntactic structure, it remained essentially the same as its neighbour, Tamil, the archetypal Dravidian language. Its pronouns, ñān (I), nī (you), avaḷ (she), ayāḷ (he) are the original Dravidian ones, with no sign of influence from a northern Apabhraṁśa or from Sanskrit.

Just as significant an indicator of its genetics is the fact that its numerals and its basic verbs are also the old Dravidian ones. The overlay of Sanskrit did not trickle down to affect core vocabulary, the way that words from the European languages did with creoles, or the Prakrits did with the languages of north India.

The numerals from one to five are still essentially the same in Tamil and Malayalam. The verb “come” is va, and the verb “go” is po. But still, if you ask any Malayali, you will be told that Sanskrit words are “everywhere”. 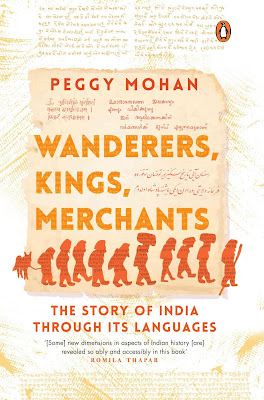 Excerpted with permission from Wanderers, Kings, Merchants: The Story of India Through Its Languages, Peggy Mohan, Penguin Viking.