An excerpt from ‘All Roads Lead North’ by Amish Raj Mulmi.

In a sense, Nepal’s relationship with Tibet and China, between the early years of contact in the first millennium and the annexation of the valley’s city-states by the Gorkha Shahs in the eighteenth century, was largely apolitical, with trade and religion being the locus. While China figured in the imagination of Nepali rulers, contact between the two civilisations went through several periods of lapses.

Tibet, however, was next door, and with Vajrayana and trade as spiritual and temporal connections, Tibet and the Nepal valley grew entwined with each other.

Nepal itself drew closer to the Kagyu school of Tibetan Buddhism headed by the Karmapa; in particular, with the Shamarpa Lama associated with the Yangpachen monastery near Lhasa. Nepali historian Ramesh Dhungel traces this tradition back to the fifteenth century, when the fourth Shamarpa constructed a monastery near Swayambhu.20 The eighth lama in the tradition was born in Helambu, a Himalayan valley east of Kathmandu, in 1695.

The relationship between Nepali traders and Tibetan Buddhist monks furthered this exchange. Even as late as 1956, a few years before the Tibetan Uprising, the sixteenth Karmapa, head of the Kagyu school, visited the home of Bhajuratna, a noted Newar trader, just before the latter’s death. “No one else was permitted to be present in the room during this [week] while they prayed and meditated together, except to bring in their meals,” a biography recalls. The relationship between the trader and the teacher began in 1947 when the Karmapa desired a Rolex watch, which Bhajuratna imported into Lhasa via Kalimpong.

“The relations of Nepal with China and Tibet reflect, in their vicissitudes, the great events of central Asia. Nepal, in fact, marks the extreme limit where Chinese influence can reach, at the height of her expansion,” Levi wrote. As he combed Chinese and Tibetan sources for any traces or records of contact with Nepal – ‘[n]ow interrupted, now taken up again, now held up to be again renewed’ – Levi concluded that relations between the three had “commence[d] from the very day that the tribes of Tibet emerge into civilisation and become an organised state”. In doing so, Levi was perhaps the first European scholar to acknowledge Nepal’s turn towards the north.

Until the middle of the eighteenth century, Nepal was a collection of hill states.

Then, Shah King Prithvi Narayan Shah, who hailed from a hill state known as Gorkha, embarked on an ambitious military campaign. By the end of the eighteenth century, Nepal – which until then signified just the valley that comprised the three city-states of Kathmandu, Bhaktapur and Patan – emerged as the modern polity it is today.

While the 1814-16 war with the East India Company chipped away at its territory, domestic political squabbles eventually led to the emergence of the Rana dynasty under Jung Bahadur in the 1840s. For the next hundred years, barring one brief rule that ended in assassination, the descendants of Jung Bahadur’s youngest brother ruled Nepal as prime ministers, while the Shah kings’ authority was completely whittled away.

With the British as allies, Rana authority was supreme. In 1950, however, the Ranas ceded power to Shah King Tribhuvan after a popular revolution. The king had been backed by independent India’s first prime minister, Jawaharlal Nehru, while a motley group of idealistic revolutionaries that came to form the Nepali Congress had launched an armed struggle against Rana rule. Nehru then negotiated a settlement that allowed the king to return to power.

The key to understanding India-Nepal ties lies in how the British viewed Nepal, and also had a firm influence in the Kathmandu court by controlling Nepal’s foreign and defence matters.

The British first recognised Nepal as an independent nation via a 1923 treaty. Until then, the colonial authority’s attitude towards the country could be surmised through Viceroy Lord Curzon’s 1903 letter to the secretary of state: “[The British relationship with Nepal] approximates more closely to our connection with Bhutan than with any other native state...Nepal should be regarded as falling under our exclusive political influence and control.”

While the British guaranteed Rana rule over Nepal, the Ranas in turn supplied soldiers to the famed Gurkha regiments, and more than 250,000 Nepalis fought in the two world wars. The dynasty also built its fortune by supplying timber and other natural resources to British India.

The 1923 treaty was the basis for the 1950 agreement between India and Nepal – one that the latter continues to regard as unequal. A post-colonial India under Jawaharlal Nehru wanted a special relationship based on its security umbrella over all three of its Himalayan neighbour-states, Nepal, Bhutan and Sikkim. Although it insisted the three were independent and sovereign, there was a catch.

Nehru, in the same 1950 speech to the Indian Parliament in which he outlined the Himalaya as India’s “magnificent frontier”, outlined his views on what an independent India’s relationship with Nepal was to be like: “We have been inheritors of many good things from the days of British rule, and many bad things also; and our relations with our neighbouring countries grew up sometimes in an expansive phase of British policy, of British imperialism... Naturally, and quite frankly, we do not like, and we do not propose to like, any foreign interference in Nepal... So our relationship is intimate, and no other country’s relationship with Nepal can be as intimate, and every other country must have to realise and appreciate this intimate geographical, cultural and other relationship of India and Nepal. There is no way out except by realising this fact.”

While the religious, cultural and economic ties between India and Nepal are, without doubt, the backbone on which the political relationship is built, it is this “special” nature of the ties that Nepali leaders since 1950 have chafed at.

Those who have ruled Nepal – although many have come to power because of Indian support – perceived India as a threat to their rule, and encouraged anti-Indianism to cement their positions in Kathmandu. India’s argument – that if Nepal wants special economic ties, it must acknowledge special political ties too – holds ground. Nonetheless, anti-Indianism has long been encouraged by Nepali monarchs and politicians as an effective and popular countermeasure against perceived Indian intervention in the country.

While Delhi would accuse Nepal of playing the “China card” as a counterweight to Indian influence, it was not until the first decades of the twenty-first century that the ‘card’ would deliver any real results.

Today, contemporary India’s insecurities over losing its influence and primacy in Nepal and South Asia to China are well founded. While this is partially a result of China’s new ambitions in its neighbourhood, Indian micromanagement of Nepali political affairs during the post-Maoist conflict transition, which peaked with the 2015 blockade, has been a key argument for Nepali leaders to look to the north.

Through all these decades, China has been perceived as a “better neighbour” in Nepal; leaders and ordinary people alike point to Beijing’s respect for Nepali sovereignty and its aid and grant projects as the reasons why this is so. But a closer reading would suggest that Beijing has been beneficent when its own concerns have been addressed by Kathmandu.

Nonetheless, the perception remains, built upon years of Indian political manoeuvres in Nepal as well as Delhi’s own cultivation of a Kathmandu elite that has utilised anti-Indianism to consolidate power. Combined with the long-standing tendency of Nepali rulers to point to the 1950 treaty as the root of the unequal relationship between the two countries, China proves to be a natural alternative – a fact that Beijing has long understood, and is now capitalising on. 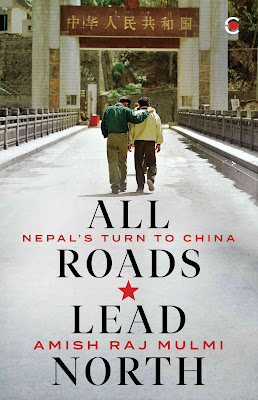