The climax of Drishyam 3 is ready: Director Jeethu Joseph

Here’s the man of the hour, Jeethu himself, in conversation about his much-appreciated film, Drishyam 2: The Resumption.

With the Drishyam sequel, director Jeethu Joseph appears to have outdone himself. The film is cleverer, more meditative, and has more twists than the first film.

Here’s the man of the hour, Jeethu himself, in conversation about his much-appreciated film, Drishyam 2: The Resumption, that is now streaming on Amazon Prime Video.

The sequel is titled The Resumption, suggesting that you see this as a straightforward continuation of the first film. In the film too, Georgekutty himself suggests that the events of this film could be interpreted as making the first film whole.

It’s god’s grace that the sequel works so well. I was always clear that the second film should not be an unrelated story. I pondered about the issues this family would face during the years after the events of the first film. The investigation would continue, the trauma would endure. Their neighbours would envy them. Also, as Georgekutty is obsessed with cinema, I wanted to persist with the film angle here too. It all just worked out. I couldn’t really explain how. 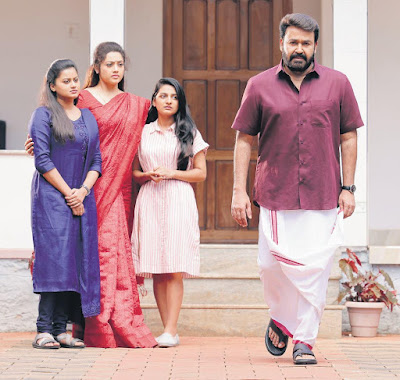 Drishyam 2 has been lauded particularly for its writing. Could you talk about your writing process?

It’s a tedious process spanning years. I let multiple stories germinate in my mind. In fact, the idea of Drishyam occurred to me in 2000 when I was not nearly close to being a filmmaker. The Drishyam sequel was one of three stories I was spending a lot of time thinking about. Over months and years, I have considered and reconsidered the events of this film. I have formed and deleted the scene order many times all in my head. Only after I am reasonably convinced do I write it down. I’m a lazy writer; so, I don’t sit down to write until I am able to visualise it all in my head. I may not be good with remembering names and numbers, but when it comes to stories, I remember every detail. Sometimes, as I am playing badminton, or attending the Holy Mass on Sundays, ideas come to me. My daughter smiles at me when she sees me being in a trance sometimes, muttering to myself dialogues of characters in my head.

The film is notable for its focus on being a family drama. Did you have any concerns that it could play on the patience levels of those coming in, seeking a thriller?

I have always maintained that Memories (2013) and The Body (2019) have been my only thrillers so far. I view both Drishyam films to be in the mystery and family drama space. I lied to the audience ahead of this film’s release when I told them that it would not have any twists (laughs). I did that to protect the film from the burden of expectations.

Does it irk you that some criticise the first half for being ‘slow’, even though it’s instrumental in setting up the explosive events of the second?

What they don’t realise is that the first half works in their subconscious mind. They don’t recognise that I’m injecting their mind with the dynamics of the Georgekutty family and making them invest in the family. But I don’t worry about such criticism. As long as the final result is as intended, all this is okay.

In Drishyam 2, the Georgekutty family seems crippled by trauma and stress. How did you approach the four characters?

As always, Georgekutty betrays no signs of weakness. This causes his wife, Rani, to feel anxious. That is why she confides in Saritha about her situation. Meanwhile, their elder daughter, Anju, is still reeling from the trauma of having committed a murder. She is struggling with nightmares, epilectic fits… I think only the youngest daughter is fairly insulated from these issues. She was too young at the time of the incident. However, she still worries about her sister. These are four different types of psychological trauma. I read many books to understand these ideas and have had long conversat ions wi th psychologists.

This film takes places six years after the events of the original. What changes in the world did you have to account for? For instance, I notice that CCTV cameras play a big part in this film.

The CCTV cameras helped me in certain areas, like enabling Georgekutty to be observant about what was going on around him. However, in that scene at the end where Georgekutty switches a certain something, I was worried about the presence of a camera. I went to a real forensic office only to find out that no camera was installed there. When some people refused to believe this, I encouraged them to go and find out for themselves. They have now realised that I am right; they are now asking for the installation of cameras there (laughs).

In covering topics like exhumation and forensic analysis, how loyal do you have to be to reality? Do you let yoursel f take creat ive liberties?

You see, the problem is, when it’s my film, people don’t like logical issues (laughs). I tell them it’s not fair! But they tell me that they will not tolerate such problems in my films. And so, I spend a lot of time on homework and preparation. My connections in the forensic department and the police force help me out with these details.

‘The climax of Drishyam 3 is ready’

Let’s talk about the performances. I enjoyed that when we revisit the film after all the twists, we realise that Saritha and Sabu never break character during those initial portions.

I sat with the actors who played these characters and told them that they could express themselves in quiet ways. That’s why when you revisit the film, you will see Sabu throwing those almost villainous glances at Georgekutty. You will see Saritha, during her conversations with Rani, trying to manipulate her. And yet, Saritha has a conscientious side to her, since she has become great friends with Rani and family during those two years. At the end, I wondered if I should make her smile as she watches Georgekutty walk out as a free man, but then, we decided against it.

Did Mohanlal need to learn something new about Georgekutty for this film? He has mentioned in interviews that he lacks the ability to truly understand the nature of Georgekutty.

I told him that Georgekutty, throughout Drishyam 2, pays special attention to his elder daughter, as he sympathises with her plight. You will always see him treating her gently… throwing his arm around her shoulder to offer support. I guess he (Mohanlal) said he couldn’t understand Georgekutty because there are places where even I did not know how he would act. For instance, I still do not know if Georgekutty actually drinks with that security guy or if he was merely pretending to drink.

There was some criticism about the first film that neither Georgekutty nor his wife reassure their lder daughter that she is not at fault for what happened.

That’s why I set the film in a small Kerala village because people in such places approach the issue like Georgekutty and wife do. If these were progressive people, well, that’s not Drishyam.

Do you think that perhaps, a passing dialogue from Georgekutty empowering his daughter, might have solved this problem?

(Pauses) Perhaps. I guess you are right. I was too focussed on capturing the desperation of Georgekutty that I did not focus on this angle. But yes, I could have written this line and avoided criticism.

Georgekutty and his writer are shown having long discussions over the two climaxes of the film within this film. Was this a conundrum you had too?

I knew that had I ended the film with Georgekutty being arrested, nobody would have liked it. The hero should always escape, as Georgekutty tells his writer. If Drishyam 2 were a book though, I would have sent Georgekutty to prison. With cinema, there is a lot of investment. I have to make the people happy (smiles).

The Telugu remake has already been confirmed. Were you considering the possibility of remakes when writing the sequel?

Not at all. I just wanted to make a good film and then, worry about adapting them.

There are comments on social media that express relief that you became a filmmaker and not a criminal, given the crafty ideas you come up with.

(Laughs) Hey, who knows. If I hadn’t been successful here, perhaps I might have considered becoming a hired assassin. There may still be a chance. (Pauses) I’m joking, obviously.

Can we expect to see Drishyam 3?

I am not going to rule it out as I did with the second film. In fact, I already have a climax ready for the third film. Let’s see if I can build towards that end.

So, there’s a chance Georgekutty can find true peace?

(Smiles) This smile is all I can give you in response now.