India's richest beggars who are richer than you think

How much do you earn a year and how much do you save? That depends on where you are in the world, and your lifestyle. But what if we told you some beggars earn much more than you and I do? Wondering how rich the richest beggar in India are? Here’s a list of few super-rich beggars in India, who own apartments, have lots of properties and a huge bank balance. But still, they continue to beg on the streets. 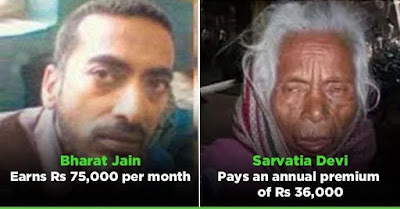 Bharat Jain mostly works in the Parel region in Mumbai. Apart from owning two apartments valued at 70 lakhs each. According to Patrika’s report, he supposedly earns nearly Rs 75,000 a month.

Lakshmi started begging from the age of just 16 in Kolkata from the year 1964 and saved as much as he could in his career of more than 50 years and opened a bank account and a lot of savings.

Gite reportedly begs near Charni Road, Mumbai and owns a flat where he lives with his brother. He apparently earns approximately Rs 1,500 a day.

Burju Chandra Azad reportedly had a fixed deposit of Rs 8.77 lakhs and around Rs 1.5 lakhs in cash, at his residence, in Govandi. All of his assets were discovered by the Mumbai police after he lost his life in a train accident in 2019.

After fracturing his leg in an accident, Pappu started begging on Patna's rail platforms to make a living. According to some reports, Kumar has assets worth Rs 1.25 crores.

Massu reportedly starts begging around 8 in the evening. He begs mostly outside high-end restaurants visited by Television and film stars. He is said to earn anywhere between Rs 1,000 to Rs 1,500 on average, every day. Aside from his 1 BHK flat at Amboli in Andheri West, he is said to own a flat in Andheri East, too.

Sarvatia is one of the more prominent beggars living behind Ashok Cinema in Patna. Apparently, she earns Rs 50,000 each month and pays an annual insurance premium of Rs 36,000.

Sambhaji Kale is another professional beggar who owns a lot of real estate- the owner of one flat, one piece of land, and two individual houses in Solapur. He has made some investments worth thousands as well.