There's one funny thing if people have observed in the commercials and ads, especially of gold jewellery ones. In one bunch of such Kannada commercials, two well known actors who are also brothers, endorse two different brands. I think by tnis time, everybody might have guessed which commercials I'm referring to. Yes, one is Kalyan Jewellers and the other is Malabar Gold. Both the actors are brand ambassadors of the two brands and one should see the lines they say to woo the audience, rather say the public, the customers.

The elder son of Kannada Nata Sarvabhouma Dr Rajkumar, Shiva Rajkumar, is the brand ambassador of Kalyan Jewels and he says, "Trust is everything... whatever glitters at Kalyan is pure gold..." 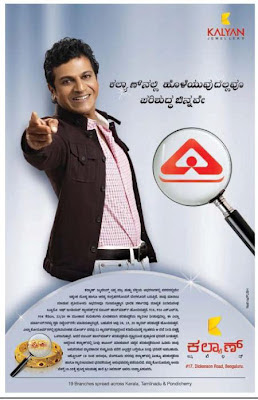 The younger son of Dr Raj, Puneeth Rajkumar, is the brand ambassador of Malabar Gold and he says "Beauty meets quality". 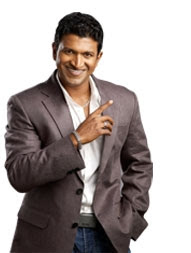 And in yet another ad the same actor, Puneeth, endorses Manappuram Finance, which provides loan against gold jewels, and says, "Why worry when you have gold at home, just go ahead and pledge the jewels to avail the loan to fulfill your dreams..."

The elder brother says buy gold, the younger brother says pledge the gold! Sounds funny, but I doubt if brothers ever gave a second thought of endorsing different brands which would one day make people watch them and laugh at them and their endorsements.

Then coming to Malayalam commercials and ads. Mohanlal is a well known actor in the industry and is the brand ambassador of not only Malabar Gold, but also of Manappuram Finance. He too says the same lines for Malabar Gold, "Beauty meets quality" and then the samelines for Manappuram Finance, "Why worry when you have gold at home, go and pledge the jewels and get the loan instantly to fulfill your dreams..." 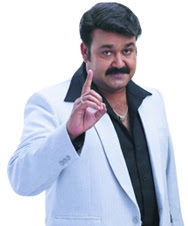 Earlier, actors gave a second thought before endorsing any brand or becoming brand ambassador, but now, time has changed and all that matters is money and popularity they get through the commercials and ads. Now popular actors and actresses endorse even drinks and are not even bothered about the impact it can have on the younger generation who often worship them, not to forget the fact that we are living in a country, where temples are built in the names of actors and actresses, unions are formed and when actors die, fans also commit suicide and go on public rampage and state governments declare holiday and hold state mourning... 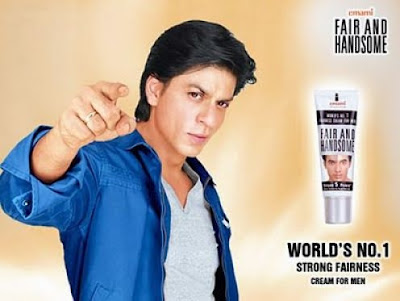 Then, there is John Abraham, who also endorses Garnier Men's Fairness Cream, who says he can measure the colour of his skin and know if the result is visible. I sometimes wonder what his girlfriend, dark beauty Bipasha Basu, thought about her boyfriend endorsing a fairness product! 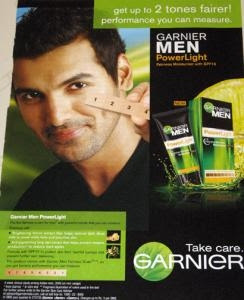 To the list was the new addition, Shahid Kapoor, who endorses Vaseline Men's Fairness Cream, who says men's product works much better than the female's cream. Cricketers are also not behind in this list. 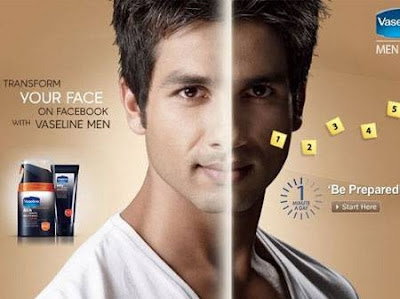 Coming to actresses, most of them endorse fairness creams and fairness soaps and tell the audience how they got their beauty after using those products. People watching those commercials and ads never give a second thought about the product, but jump to buy them because they have been endorsed by popular celebrities and assume that the actors are indeed using those products. They fail to recognise or see the work of studio or photoshop effort that has gone into the making of the actor or actress look extraordinarily gorgeous! 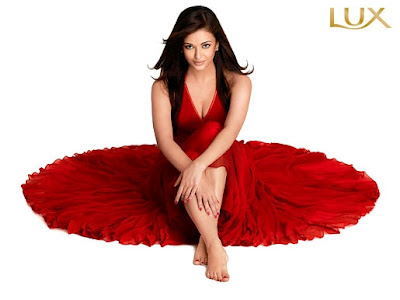 How many people stop and think that Aishawarya Rai may be using some other international soap and not Lux, as she says in the commercial, "For satin silk skin, use Lux..." 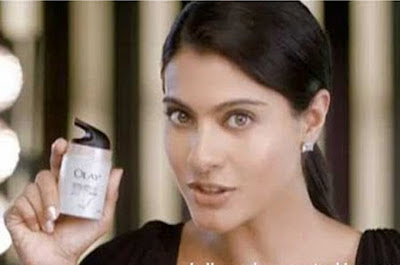 One can easily see the photoshop work when one sees dark beauty Kajol looking whitewashed after using Olay Cream! 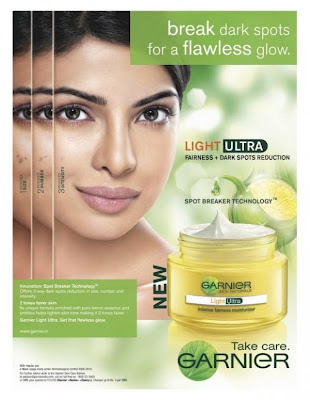 And what about dusky beauty Priyanka Chopra looking whitewashed in the Garnier Light Face Cream commercial and ads?!
Posted by Arjunpuri in Qatar at 09:05