Yet, is the feminist mode the only way of studying this text?

The historical biography has gained much currency in recent literature and scholarship, in India, and abroad. When viewed through a feminist prism, the project focuses on two interrelated questions. How can one best recount the stories of women and girls, still largely missing in the pre-colonial and colonial history of South East Asia? And, in this quest – what counts as evidence, and therefore as history?

Ruby Lal’s Empress: The Astonishing Reign of Nur Jahan, recently published as a new paperback edition, lives up to the promise of addressing both these questions, within the context of the Mughal empire approaching its high noon. But in fact, it achieves a good deal more.

However, an adjunct but equally interesting question appears if we put this book to Lal’s own method of interrogating an archive. Is the feminist mode the only way of studying this text? A new reading of this book, first published in 2018, uncovers other historiographical nuances.

A matter of style

One of the first things that stands out is Lal’s stylistic approach to her subject. Over the past two decades, other noted academic historians have tried their hand at the “popular but authentic” historical biography, and fallen short of the mark. The talent of getting a discerning, non-academic reader genuinely engaged in Mughal history involves so much more than the decision to exclude a discussion of transliteration and diacritical marks, curbing one’s temptation to launch into lengthy footnotes or dispensing with a weighty, full-length bibliography. This is where Lal is so successful.

The book begins with a scene on the morning of 23 October, 1619, when the twentieth wife and empress of Jahangir leads a retinue to a forest near Mathura, to flush out and kill a tiger that had been terrorising a nearby village. While the sole purpose is to bring down the tiger, the party that heads out has all the leisurely pace, pomp and ritual of an imperial pageant.

Lal’s treatment of this entire episode is surprisingly cinematic. But as soon as the hunt is over, the narrative zooms out to inhabit a more objective, scholarly tone:

“Nur’s shooting skill wasn’t the only thing that made her highly unusual. She held a position in the empire never before filled by a woman: co-sovereign. For more than a decade and a half, from a few years after their wedding until Jahangir’s death, Nur Jahan ruled along with their husband, effectively and prominently, successfully navigating the labyrinth of feudal courtly politics and the male-centred culture of the Mughal World.”

This technique of the juxtaposition of alternating viewpoints – one moment in the midst of the action, and in the next, distanced, academic and feminist – is sustained skilfully through the whole length of the book. This allows Lal the latitude to deploy literary stratagems that one usually associates with creative non-fiction, something she appears to have a natural flair for, without compromising on authenticity – because she can “cut away” at will, delving into the more academic nuances of the subject, across a wide range of domains, from religious discourse, miniature painting and architecture to gender and feminist studies.

In tracing the story of Mihr un Nissa, the daughter of refugees from an oppressive Persian regime, from her birth outside the gates of Kandahar to the pinnacle of her fame as the Mughal empress who signed imperial orders as Nur Jahan Padshah Begum, her meteoric rise to power, and an even swifter fall from grace, Lal establishes a fundamental point.

Contrary to the slander of jealous contemporary nobles, aspersions in the Shahjahan-Nama or the equally chauvinistic latter-day European retelling of her story, Nur was neither a gold-digger nor a femme fatale, preying on the affections of her perpetually intoxicated husband. Rather, her spectacular success was the product of her extraordinary innate intelligence and her repeated demonstration of skills, from hunting and warfare, to astute political advice, hitherto solely the preserve of males of imperial or noble birth.

Naturally, the question now arises: how and at what point did Mihr inculcate such skills, and where was there an occasion to practice and hone them? To answer this, Lal has scoured the scantly recorded youthful years of Nur’s life with a fine-tooth comb, identified possible situations and then set down her conjectures, carefully and subtly.

Where Mihr and her first husband, Ali Quli Istajlu, move from the Mughal capital to the Burdwan district of Bengal, she posits: “Rather isolated in the eastern provinces, he would be likely to lean on her and discuss matters of trade, taxes, public grievances, the particulars of his visits to Rajmahal [the provincial capital], and news from the Mughal court. Mihr’s later grasp of governance suggests that Quli had talked about these things with her – or that she was very observant and perspicacious.”

Again, a few pages later, Quli having relocated to Allahabad, we find: “Mihr was left on her own in a remote area plagued by tigers and robbers… Mihr may have taken up the musket at this time, so she’d be able to defend her family.”

Methodologically, this is an unusual, interesting and slightly risky choice for an academic. But it pays off. Starting from the established position or end-point – that of Nur’s astonishing accomplishments – Lal works her way backwards, in a reverse-Bayesian mode, through a series of iterative, plausible hypotheses that are cleverly embroidered into the tapestry of the overall narrative.

The outcome that this exercise achieves, of course, is much bigger: the credible recreation and insertion of some missing pages of Mughal history. Reversing centuries of wilful erasure suffered at the hands of successive chroniclers, Lal thus accords Nur Jahan her rightful and lasting place in the sun.

Having read Empress, one understands instinctively why readings of Francis Gladwin, Beni Prasad and Ellison Banks Findley inevitably left one dissatisfied. Dutifully researched and well-intentioned as these earlier works were, they were lacking in one crucial aspect – an original voice. In this case, a distinctly feminist one.

Lal places the male-centred animosity against Nur Jahan, during her own time and retrospectively, after her death – fitna, meaning chaos or disorder being the word repeatedly used in reference to her – in the orthodox Islamic thought of the times. She explains:

“For centuries after the Battle of the Camel, the Islamic world associated fitna with what were seen as innately destructively elements in women. Their sexuality was ruinous, her ambition damaging. Women were a source of trouble, turmoil and temptation. Women’s domain was the sacred, inner quarters. What else could follow a transgression of these boundaries, but fitna?”

From a feminist perspective, Empress continues the exploration of Lal’s earlier academic books. In Domesticity and Power in the Early Mughal World, she made extensive use of Gulbadan Begum’s Humayun-nama, a text that had received only a cursory notice by generations of male Mughal historians – with the exception of Kalika Ranjan Qanungo.

In her second book, Coming of Age in Nineteenth Century India: the Girl-Child and the Art of Playfulness, the aim was to use the existing sources, untranslated and obscure material, to illuminate a feminine world missing from the records. The same motivation and spirit of inquiry can be seen here. In recounting one of Nur’s courageous and empathetic actions, allowing the ladies in her harem the choice to either look for a husband or remain with her, the author reads this as a “feminist moment” of the empress.

As Lal acknowledges, this book really emerged as an answer to the challenge thrown by a male colleague: “How are you going to write a history of Mughal women, their relationship with court and the empire? There are no sources for it!” The answer, she finds, depends on which sources one studies, and how one reads them.

Gulbadan Begum’s Humayun-Nama, Abul Fazl’s monumental panegyric, Akbarnama, the utterly contrarian picture presented by Badayuni in his three-volume Muntakhab ul Tawarikh, Jahangir’s own memoirs, as well as later court histories written after Nur’s death in 1645, all undergo a worthy revisitation. In the end, Lal’s finding is that “Nur is there, it turns out: all we have do is look for her…”. And though in seeking out her subject, she has to peer over the figures of towering men, it’s important to note that she doesn’t then cast these men aside.

As the work of a feminist historian, Empress marks an insightful scholarly contribution to our understanding, of Nur Jahan, as well as of the lives, mores, trials and triumphs of women of noble birth and in the imperial harem of the Mughals. However, it is also an equally important commentary on Jahangir and his reign, an examination of the dynamics of power between the capital and far-flung provinces such as Bengal, and the dramatic recounting of inter-generational conflict and princely rebellion, court politics, schemes and machinations, the bizarre kidnapping of the emperor, treachery and imperial retribution – in other words, a perpetually relevant commentary on the condition of men-folk of all stations, who toiled and fought and thrived in the late 16th and first half of the 17th century, in the Mughal empire. Stemming from an avowedly feminist project in mind, the book nevertheless expands organically to assume a broader vision.

Lal does not cast a Rembrandt-like spotlight on Nur, and then proceed to obscure the emperor, princes, commanders, courtiers, ladies-in-waiting and servants around her, into pools of darkening, brown penumbra. Instead, having observed her subject in the sequestered chambers of the haveli, she draws her protagonist out into the open, to humid, rainy Burdwan, managing both her family and the estate, in the absence of her husband, to the jharokha of the Agra fort, to the banks of a raging Bahat River, desperate, indignant, firing off volleys from her musket at a superior renegade force, or – possessed of supreme composure – at the site of the hunt. 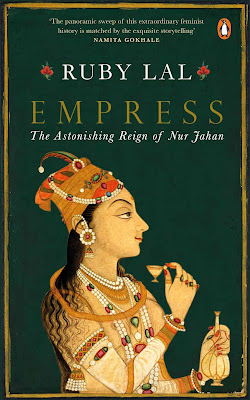 True, Lal’s visualisation of the royal hunt situates Nur at the centre of the scene – after all, she did succeed in killing the tiger with a single shot. But the author’s sweep also takes in the villagers, now-anxious, now-hopeful, that follow the royal train at a safe and discreet distance; the drummers, the local hunters who also double as guides, noblemen, soldiers, attendants, Nur’s elephant groaning and swaying nervously because it has sensed the presence of the tiger, and cannot stand still; and at the empress’s side, riding his own elephant, the devoted husband and emperor, who will never again draw his sword or fire a musket at another living creature, man or beast.

It is a gaze that is painterly, all-encompassing, and at its core, deeply humanistic.