Even after Indian independence, the rupee was the legal tender in a few Persian Gulf states. It was replaced with the Gulf rupee in 1959 to curb gold smuggling.

When an Indian traveller wanted to visit certain Persian Gulf sheikhdoms in the 1950s, there was no need to stock up on foreign currency before the journey since the Indian rupee was the legal tender in these countries. For almost all financial transactions, the United Arab Emirates (then known as the Trucial States), Kuwait, Bahrain, Oman and Qatar used the rupee. The system was put in place by the British when they ruled India. But the arrangement suited the Reserve Bank of India as well, as the Gulf countries would purchase the rupees with pound sterling, against which the Indian currency was pegged.

By virtue of the system, India had economic clout in the Persian Gulf states that were still British protectorates and years away from a major oil boom. However, smugglers and other criminals saw it as an opportunity to make money from the average Indian’s desire to hoard gold.

The modus operandi was quite simple. Smugglers would send young men to the Gulf on ostensible business trips with wads of rupee notes. There, gold would be purchased with the smuggled rupees and brought back to India. This would inevitably create an excess of Indian currency in the Gulf, leading to the extra rupees being sold back to the RBI, which lost valuable foreign exchange.

As is the case now, gold smugglers were very innovative in their methods to bypass Indian Customs officials. A well-known and often-repeated anecdote among the first generation of Malayali migrant workers in the Gulf tells the story of a man who was asked by an acquaintance to take a clock back to Bombay from a Gulf country. The unsuspecting young man carried the clock, inside which gold biscuits were neatly hidden, and was arrested and prosecuted in India.

“While the smuggling had been a problem for many years, in 1957 and 1958 the problem rose to alarming proportions and took a large toll on India’s reserves of foreign exchange,” Peter Symes, an Australian researcher and expert on paper money, wrote in a 1999 article.

A New York Times report from April 1959 stated that India had to pay the equivalent of $92.4 million in sterling for rupees presented through traders and banks in the Persian Gulf in 1957 alone. The report estimated that $69.3 million went to the region from India in exchange for smuggled gold in the first nine months of 1957.

Launch of the Gulf rupee

By 1959, India faced a major foreign exchange crisis thanks to the thriving gold smuggling business, losing hundreds of millions in sterling.

“To obviate or at least mitigate malpractices, which such an arrangement could give rise to, a separate series of notes exclusively for circulation in the Gulf (Kuwait, Bahrain, Qatar, and the Trucial States) were issued by the Indian Government and the Reserve Bank of India in the 1950s,” according to the RBI.

On May 1, 1959, Indian President Rajendra Prasad gave his assent for the Reserve Bank of India (Amendment) Act 1959, after it was passed by both houses of the Parliament. The law allowed the Indian government and RBI to issue special notes that were intended to be circulated only in the Gulf region. This currency, which had the same value as the Indian rupee, was known as the Gulf rupee or External rupee. 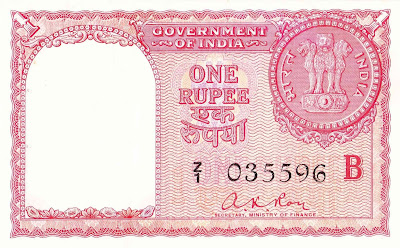 “The Ministry of Finance drew up the reform after months of secret consultations and after obtaining the approval of the British Government, the Bank of England and the rulers of the sheikhdoms,” the New York Times reported after the Lok Sabha passed the bill.

Shrouded in secrecy, as was the case with the 2016 demonetisation in India, few members of the ruling party knew that this reform was being planned. The task was entrusted to Morarji Desai, then the minister of finance. The bill was introduced in the Lok Sabha on April 27, 1959.

“The introduction of the amendment to the Reserve Bank of India Act, to the Indian parliament, caused some consternation to the members of parliament, as it was proposed without any warning,” Symes wrote. “The Government of India had tried to introduce the amendment with a degree of haste so that they could reduce the window of opportunity for people who might take advantage of the proposed issue of special notes and increase the smuggling activity in the immediate future. However, following a delay of a day or so in which the opposition was allowed to review the measures, the amendment to the Act was passed with little difficulty.”

The Gulf rupee notes retained the contemporary design but were different in colour and carried the prefix “Z”. The notes were issued one, ten and hundred denominations and were redeemable only at the Bombay office of issue.

Holders of regular Indian currency notes in the Gulf were given six weeks to exchange them for the new currency or sterling. The transition to the new notes was fairly smooth and regular rupee notes were no longer accepted in the Gulf. Innovative gold smugglers, however, found other ways to satiate the Indian appetite for the precious metal. At the time of the passing of the bill, Indians were believed to be privately hoarding up to $2 billion in gold.

Indian pilgrims also took rupee notes when they went on the Haj pilgrimage, where they could freely exchange them for Saudi riyals. The Indian government had initially allowed Saudi banks and traders to exchange these rupees for sterling in Bombay, but fears persisted over smugglers using this route to buy foreign exchange.

In response to this threat, the Indian government began to issue special Haj rupee notes for pilgrims going to Mecca and Medina. The notes in ten and hundred denomination had the word HAJ inscribed on the obverse. Another way to distinguish them from normal rupee notes was the serial number that was prefixed with the letters “HA”.

The Haj rupee was exchanged at par to the Saudi riyal in the early 1960s. (A Saudi riyal is now worth almost 20 rupees.) Haji Siddique Mohammed, a 79-year old retired railway employee from Mangalore, remembers using the Haj rupee during a pilgrimage in 1963. “We got the Haj rupee from the Haj Committee of India, before boarding the ship for Jeddah,” Mohammed told this writer. “I managed to preserve a couple of notes, but they were unfortunately lost when I moved out of my official quarters after retirement.”

Devaluation of the rupee

The special notes for the Haj and the Gulf stayed in circulation until the mid-1960s but were slowly being phased out in some countries. This was at a time when Indian economic growth was slow, and the Gulf nations were in the early stages of a boom. Kuwait introduced its own currency as early as 1961 and a few years later, Bahrain followed suit.

The end of the Gulf rupee was, however, precipitated by an important development in India. In June 1966, Indian Finance Minister Sachindra Chaudhuri, with the blessings of Indira Gandhi, announced a devaluation of the rupee. Overnight the exchange rate of the dollar rose to Rs 7.5 from Rs 4.76. Although this decision surprised many, rumours were doing the rounds for several months.

A World Bank team that had visited India in 1965 proposed the idea of devaluation of the rupee to get the economy moving. Media reports of the time suggested that devaluation was one of the West’s preconditions for increasing aid for India’s fourth five-year plan. The decision prompted members of the opposition and the business community to accuse the government of bowing to pressure from the United States and multilateral lending institutions.

The devaluation created a stir in West Asia, with some rulers asking the British government to intervene, since the original arrangement to rely on the Indian rupee was put in place by the British. Such requests were turned down.

Qatar and Dubai withdrew the Gulf rupee from circulation within months of the devaluation of the Indian rupee, with both states temporarily using Saudi riyals. They would subsequently use Qatar and Dubai riyals, which had the same value of the pre-devaluation Indian rupee. Most of the Trucial States followed suit, but Abu Dhabi decided to use the Bahraini dinar, which had an exchange rate of 10 Gulf rupees.

“Consequently, following the introduction of the Qatar and Dubai riyal, the Qatar and Dubai Currency Board made a claim to the Reserve Bank of India for the total amount of sterling originally sent to cover the rupees held by Qatar and Dubai, and not the lesser value of what the Gulf rupees were actually worth,” Symes wrote.

The RBI would deal with each of the Gulf states separately when it came to the settlement of the sterling reserves that it held.

The RBI-issued currency survived in Oman until 1970 and was mostly accepted as legal tender only in the country’s ports. In May 1970, the Saidi rial (named in honour of the House of Al Said) was introduced as a currency in Oman and replaced the Gulf rupee. The new currency was exchanged at par with the sterling. Gulf rupees were exchanged for 21 rupees to the riyal and were redeemed in Bombay by the Omani government. The country’s present currency the Omani rial became the legal tender in 1972.

The Haj and Gulf rupee notes were withdrawn by the RBI in the early 1970s and are now a much-sought after collector’s item. Auctions conducted by Spink & Son have managed to get bids from 120 pounds and VAT for a 10 Gulf rupee note to 44,000 pounds for a 100 Haj rupee note. Collectors and enthusiasts warn of several fake notes being sold for high prices on different e-commerce websites.

Five decades after the Gulf and Haj rupees have ceased to exist, India continues to enjoy strong business and cultural links with Persian Gulf states but the idea of the country getting back the economic clout that newly-independent India enjoyed in West Asia does not look realistic.

Ajay Kamalakaran is a writer and independent journalist, based in Mumbai. He is a Kalpalata Fellow for History & Heritage Writings for 2021.