Out of samples of 13 brands, including Dabur and Apis Himalaya, only three – Saffola, Markfed Sohna and Nature’s Nectar – met the internationally accepted standard for honey purity.

An investigation into adulteration of honey has found that several major brands in India do not pass purity tests, which implies that there is adulteration in these honeys. The Centre for Science and Environment in Delhi and Down to Earth (DTE), which carried out the research, found that out of the samples of 13 brands sent for testing to a German lab, only three – Saffola, Markfed Sohna and Nature’s Nectar – met the internationally accepted standard for honey purity. The rest – Dabur, Patanjali, Baidyanath, Zandu, Hitkari and Apis Himalaya failed the test. Most of the brands selling honey in the Indian market were also found to be adulterated with sugar syrup.

These findings were shared with the media on Wednesday by Sunita Narain, CSE’s director general. The samples of the honey from the selected brands were tested in both India, as well as a German lab, where they were put through a Nuclear Magnetic Resonance Spectroscopy (NMR) – an internationally accepted standard for honey purity. Almost all the top brands, except Apis Himalaya, passed the tests in India, while a few smaller brands failed the tests to detect C4 sugar, i.e. basic adulteration using cane sugar. 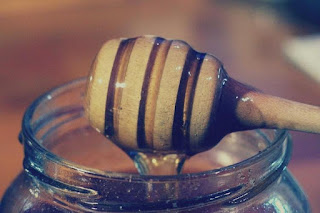 Seventy seven percent of the honey tested was found to be adulterated with sugar syrup, and out of the 22 samples tested, just five passed all tests for adulteration. Further, the study also found that there are syrups from China in India that are designed to pass the Indian tests mandated by the Food and Safety and Standards Authority of India (FSSAI).

“It shows how the business of adulteration has evolved so that it can pass the stipulated tests in India. Our concern is not just that the honey we eat is adulterated, but that this adulteration is difficult to catch. In fact, we have found that the sugar syrups are designed so that they can go undetected,” says Amit Khurana, programme director of CSE’s Food Safety and Toxins team.

Honey is among the most adulterated substances in the world. The investigators’ first hint that something was afoot came from the changing FSSAI standards for purity of honey. The FSSAI standards for testing for adulteration in honey changed frequently since 2018. However, Amit said that it remained unclear how much the food regulator really knew about this “murky business.”

While FSSAI has a directive against use of golden syrup, invert sugar syrup and rice syrup, investigators found that Chinese portals like Alibaba, OkChem and Tradewheel were selling ‘fructose syrups’ and ‘glucose syrups’ that claimed to pass several honey adulteration tests. The major sellers were found to be a company called Wuhu Runquin daily necessities, HYK Foods and Wuhu Deli for fructose; and Hunan Huishend, Anhui Baihe Foodstuff Co. Ltd., and Anhui Shunxin for glucose syrups. “[…] China is driving the trend of fructose syrup quantity imported in India. The average quantity is over 10,000 MT every year since 2014-15. Similarly, all glucose syrups imported to India have come from China since 2016-17. There was a spike in the imported quantity to more than 4,300 MT in 2017-18,” DTE reported.

Reporters ultimately sent emails to Chinese companies named CNNFoods and Wuhu Deli Foods, asking for syrups that could pass honey adulteration tests in India and received affirmative responses. Investigators also learnt of a code word from beekeepers called ‘all pass syrup’, which is reportedly being manufactured in India, in a factory in Jaspur, Uttarakhand, and procured samples.

Sunita then said in the virtual press conference that using this syrup, they adulterated different samples of honey with Chinese as well as the Indian ‘all pass’ syrup up to 25%, 50% and 75%, and sent the samples to CALF lab. The honey with 25% and 50% adulteration passed the purity test; the 75% adulterated ones did not. With this, investigators confirmed that sugar syrups that pass FSSAI’s 2020 standard for honey exist in India. 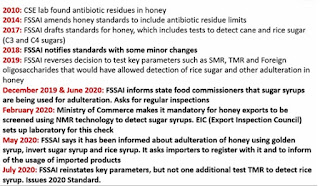 After doing the tests in India, investigators sent samples of well-known big and small brands, mentioned earlier, to a German lab for NMR test. Only samples from three brands passed.

The investigators pointed out that this adulteration is bad news for beekeepers, as well as for public health. Beekeepers told DTE that they were getting good rates for honey till 2014-15, but then the rates fell from Rs 150 a kg to Rs 60-70 a kg. Bees are crucial for the ecosystem, as they work as pollinators too. As for consumers, by consuming adulterated honey with sugar syrups, they run the risk of becoming more vulnerable to obesity and overweight.

They also warned that the dynamic nature of adulteration. While Dabur and other brands passed the Indian honey adulteration tests, they were found to be adulterated in the NMR tests.

Arnab Pritam Dutta, one of the reporters with DTE, added that there is no real way for consumers to know if the honey they are consuming is pure or not either. “We need a farm to fork chain to be established, and traceability to know where the honey is being sourced from.” Investigators added that stricter enforcement and public testing be done so that companies are held responsible. They also suggest that import of syrups from China be stopped.

When asked if they had made available the findings to the respective honey companies or the FSSAI, the investigators responded in negative, and said that now that the findings have been made public, the stakeholders are likely to respond.