For the love of words, 82-year-old compiles dictionary of 4 south Indian languages

Njattyela Sreedharan is a class 4 dropout who went on to travel, train, read aplenty for 25 years to bring out the dictionary.

Njattyela Sreedharan sat looking at the page in front of him. He had written the words ‘seemantha rekha’ – the Malayalam term for hair parting where some married women apply vermillion. Next to it, he had added the translation in Telugu and Kannada.

But the Tamil column lay blank. No one he asked seemed to know the Tamil equivalent for ‘seemantha rekha’, including men and women across ages, teachers, and Tamil scrap collectors who came home. Everyone either shrugged off or laughed at him. Finally, months later, a woman who also laughed in the beginning, gave him the term – ‘vakidu’. Thrilled, Sreedharan added it to the fourth column of his page. He just got one more entry for the multilingual Dravidian dictionary he had been preparing for years. The dictionary finally got published this November, 25 years after the 82-year-old began working on it. 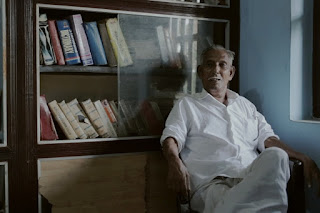 “For 25 years, I travelled and trained and talked to many for the dictionary. But it is in the last 10 years that I sat at one place, without going anywhere, without a social life, to fully focus on writing. Only then could I complete it,” Sreedharan says from his house in Thalassery.

He also points out that Hermann Gundert, who created the first Malayalam-English dictionary in 1872, was also in Thalassery when he wrote that. “Maybe his spirit entered my body,” Sreedharan jokes.

But unlike Gundert, Sreedharan is no scholar. He dropped out of class four to work in a beedi making company. But he had read books like Sreekrishnacharitham Manipravalam by Kunjan Nambiar and Balaramayanam by Kumaranasan at school. His love for language must have begun around then, Sreedharan reckons.

He went on to read a lot, and as an adult, found a job with the Public Works Department. Nandan, who made a documentary on Sreedharan, says that it was during this time that he got acquainted with Dr TP Sukumaran, a professor at Nirmalagiri College, who gave him the idea of compiling a dictionary, containing colloquial usage of Malayalam words.

Sreedharan had by then become familiar with Tamil, learning it in Palakkad. He decided to train himself in the two other Dravidian languages of Telugu and Kannada before compiling the dictionary.

A Kannada-speaking colleague, Govinda Naik, taught him the language. Sreedharan also took Kannada lessons from writer Raghavan in Kasargod. In Taliparambu, a man from Andhra Pradesh helped him pick up Telugu. But Sreedharan didn't stop there. He made several trips to Mysuru, Mangaluru, Andhra and Tamil Nadu and spoke to the people. He collected words from 20 to 25 dictionaries. He learnt from vernacular newspapers and magazines.

"I read everything from horoscopes to cooking recipes. One must not mock them. You get the most common and useful words from the recipes," Sreedharan says. 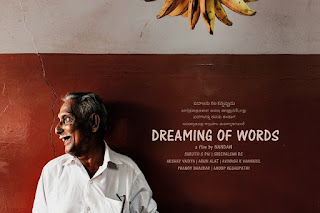 The fact that there has still not been a comparative study of the words in the four languages kept Sreedharan, the language lover, going. “A lot of people travel between all these states for work or business. It will be very helpful if there is a resource for learning the everyday words they’d need – like drinking, bathing, eating. Another reason I wanted to work on the dictionary was the way dialects of some places were seen as inferior to those of other parts of the state. When people from one part of the state tease those from another for their pronunciation, it makes the latter think poorly of their dialect. Calling one dialect purer than another is like discriminating between castes, claiming one to be superior to the others,” Sreedharan says feelingly.

It also struck him as odd that people found it shameful to use words of their own language for private body parts but were not uncomfortable to use words from another language.

“I was also curious about why certain similar sounding words changed pronunciation when it came to Malayalam. 'Thodangu' – meaning start – is pronounced with ‘tho’ in Kannada, Telugu and Tamil but in Malayalam it becomes ‘thu’. 'Elaneer' – tender coconut water – is pronounced with ‘ila’ in Malayalam, but ‘ela’ in all the other languages. I put all of this together for the readers to interpret it in their own ways,” Sreedharan adds.

He kept finding Dravidian equivalents for Sanskrit words too. For instance, both ‘meen’ and ‘malsyam’, meaning fish, come from Sanskrit, Sreedharan says.

He found that it is easier to learn the scripts of other languages than that of Malayalam. That would also come out in the dictionary, he says.

The dictionary was not easy to publish. Having prepared the content, Sreedharan took it to a number of places to get it printed. Everyone was wary of getting the words wrong. Finally, a woman agreed to do the desktop publishing (DTP) for Rs 100 a page and she was paid Rs 1 lakh for the whole dictionary. It got printed by the Kerala Senior Citizens Forum.

“It is an expensive and exhaustive process. You travel, you read, you buy books and materials, and you sit for long hours to write. I have worked 10 to 14 hours on many days.”

Sometimes, he says, he cannot not believe that he achieved this at his age. All the reports of his dictionary even before it got published had him overwhelmed. And Nandan has made a documentary on him too – Dreaming of Words. The film has just got selected for the 18th Mindanao Film Festival.