While the two languages have similar-sounding words, there has not been any linguistic study establishing the same.

If you were to go to South Korea and call out to your Amma (mother) or Appa (father), chances of a Korean national turning back in an answer are very high. Turns out, the exact same words are used in addressing parents in the Korean language too. And the similarities don’t stop there.

Cultural and linguistic similarities across Asian countries is a familiar concept, it is the same among European countries. However, the extent to which the similarities can be observed forms a topic of great interest for scholars, anthropologists, linguists and the likes. Some might already know that the language spoken in Korean countries and the language spoken in Tamil Nadu (India), share certain words, much to the fascination of many.

This video interview with Jung Nam Kim, President of Korean Society of Tamil Studies, who speaks in Tamil, highlights some of the shared words. “I” is “naan” in Tamil and in Korean, similarly “you” is “nee” in both,” he says and claims he has found 500 similar words between the two languages as a result of his research. Tamil words naal (day), pul (grass), eru (climb) have similar-sounding words in Korean.

While this is indeed an astonishing fact, there are cultural similarities too. Soonjin Park, a Korean teacher at the InKo Centre shares a little about her first impression of cultural similarities between Tamil Nadu and South Korea. “I find the kolam drawn in front of houses fascinating,” she begins and continues, “I’ve also found it interesting that people here enjoy dancing and singing, I have observed it in films and during festivals. This is a lot like Koreans, who have enjoyed singing and dancing for a long time, and this is why K-Pop has developed now.”

Park adds, “Language and food are similar to Korea. There are many words with similar pronunciation. Also, the main food in Korea too is rice. And most people like spicy food very much like here in Tamil Nadu, which is similar in Korea.”

Nandini points out, “There’s Korea Mandu (meat, vegetables and tofu filled) that’s a lot like our kozhukattai. Like our Athirasam (a deep fried sweet) they have the Yakgwa. Koreans too have rice porridge (kanji) and it is called juk. And of course like our iddiappam/sevai they have the hand-pulled noodles called myron.”

However, Karthik Malli, independent researcher and writer on South Indian languages rebuffs these claims made on linguistic similarities on the basis that they have not stood up to academic scrutiny. “This link between the two languages has never been established in linguistics. If someone does make that claim, it is merely conjecture,” he begins. 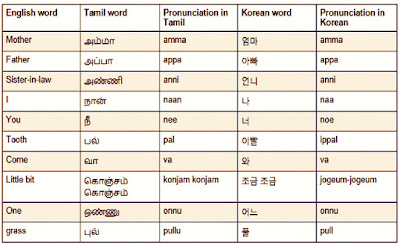 “Even from a historical perspective, I cannot find significant links between Tamil region and Korea. There were trade links with China established by the discovery of a Hindu temple built in China by Tamil merchants and inscriptions on stones by Tamil migrant merchants and all that’s fascinating. But that has no bearing with this,” he explains.

Dravido-Korean linkage hypothesised and proposed by Homer B Hulbert, an American missionary who lived in Korea in the early 20th century was later dropped around the 1980s. In 1984, Morgan E Clippinger, a Korean studies scholar proposed over 400 sets of words that were similar between the two languages.

Karthik believes the study in similarities has no academic consensus. “Most languages around the world use words that have “ba”, “ma”, “pa” in words for parents. In Arabic, Persian and Marati it’s ‘baba’ for father and it doesn’t mean the languages are similar. It is the first syllable babies make and therefore we cannot entirely base the relationship of these two languages on this similarity. Has this theory stood up to academic scrutiny? No. We may have some researchers saying it, but in academia, it is looked at like a fringe theory,” he says.