President 'still in the process of clearing his virus’, argues respiratory scientist, as another aide tests positive

Donald Trump is likely shedding airborne coronavirus particles each time he breathes, an expert in respiratory sciences has said, as the US president continues to recover from his diagnosis last week.

The 74-year-old president, who remained out-of-sight on Tuesday, was discharged having spent as little as three nights at the Walter Reed Medical Centre outside Washington D.C. on Monday.

That followed his coronavirus diagnosis on Thursday night, which his doctors admitted had caused two drops in the president’s oxygen levels over the weekend.

And whilst his physician, Sean Conley, reported that the president had “no symptoms” on Monday, it was still not clear whether Mr Trump was still Covid-19 positive – and therefore potentially spreading his infection to White House staff at present. 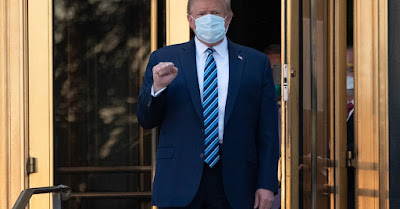 Studies carried-out on coronavirus patients have so far shown that they typically continue to shed airborne virus particles for up to 10 days from their first symptoms, according to Dr Julian Tang, honorary associate professor in respiratory sciences at the University of Leicester.

Dr Tang argued that the president was likely still shedding virus particles if he was diagnosed on Friday morning.

“If he was PCR (polymerase chain reaction) positive on Friday with more symptoms developing on Saturday last week, he is likely still infectious and shedding airborne virus each time he breathes,” said the professor.

The president has been widely criticised for ripping off his mask while appearing on the Truman balcony upon his return to the White House on Monday, a stunt described as being reminiscent of Mussolini.

“We expect most acute Covid-19 cases to be shedding live virus for up to 10 days post-symptom onset,” he added, pointing to the body’s production of antibodies around 10 to 15 days after initial symptoms," Dr Tang added.

“So, although he has apparently recovered to some extent from his acute Covid-19 phase, he is still in the process of clearing his virus,” Dr Tang said.

That assessment came as another close aide to the president, Stephen Miller, was diagnosed with the virus on Tuesday night.

"I think POTUS was infected with coronavirus for at least a week before he was admitted to the hospital ... I think he's the superspreader,” argued Dr Reiner. “And I think the reason the White House will not have the CDC do a formal check ... is they're concerned patient zero might be POTUS."

CNN reported on Tuesday that the White House is refusing the offer of contact tracing assistance from the Centers for Disease Control, amid speculation surrounding the extent of the administration's attempts to isolate potentially infected individuals.

Mr Trump is expected to continue recovering for at least another week from the White House, with less than four weeks to go until election day.