Mars will make its closest approach to Earth in more than two years this month, as it reaches its point of opposition in the night’s sky.

Nasa has described the red planet’s appearance as “effectively a ‘full’ Mars”, offering the best chance to view our planetary neighbour in nearly 20 years.

On 6 October at 3.19pm BST, Mars will be the closest to Earth along its orbit, while on Tuesday, 13 October, Mars will come to opposition. At this point it will shine brighter than it has since 2003 and will not appear like this again until 2035. 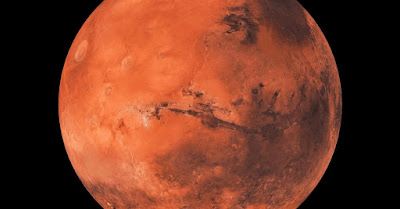 October’s opposition will be extra special due to the orbits of Earth and Mars lining up to be at their closest to each other.

The astronomical phenomenon will see Mars rise as the Sun sets, and set as the Sun rises.

Combined with a new moon ‘supermoon’ in the middle of the month, it will give both casual skygazers and seasoned astronomers a rare chance to view Mars at its most spectacular.

With the naked eye, Mars will appear brighter and more distinguished in the night’s sky, while with a telescope it will be easier to make out features like polar caps and volcanoes.

Interest in Mars peaked recently, when scientists discovered multiple “water bodies” under the south pole of the planet.

The researchers said the discovery could be the key in the search for alien life, as living organisms require liquid water to survive.

October is arguably the busiest month of 2020 in terms of near-Earth astronomical events.

Full moons bookend the month, with a Harvest Moon at the beginning of October followed up by a rare Blue Moon on Halloween.

The Orionid Meteor Shower is also active from 2 October until 7 November, bringing with it “prolonged explosions of light", according to Nasa.

The peak of the meteor shower is expected to take place on 21 October, though several days will see strong showings.

The US space agency said 2020 would see an unusually large peak of meteors – commonly referred to as ‘shooting stars’ – with up to 20 occurring per hour.