2.0' review: Shankar and Rajinikanth's sequel is visually grand but underwhelming

While Rajinikanth is fun to watch as 'Chitti' once again, Akshay Kumar's villain is a let-down.

It's a bird! It's a plane! It's...Pakshirajan! Shankar's 2.0 , the sequel to Enthiran, is larger in scale and ambition from the first film. It feels like Shankar is making a statement - yes, we can combine our local 'Vada pochey' jokes with visual effects that can compete with international films. It's an ambitious project whichever way you want to look at it. This is a Rajinikanth film without an introduction scene or song. This is also a Rajinikanth film where the 67-year-old actor sports a flaming red tuft of hair and incredibly manages to own it yet again. There's a lot riding on the film and you can see the kind of effort that has gone into it, but one suspects that this could also prove to be its undoing. If the first film was Man Vs Robot, the second is Man and Robot Vs....? Mobile phones? Human greed? Human apathy? Human disregard for Nature?

In the sequel to Enthiran, Dr Vaseegaran (Rajinikanth) is up against a strange Birdman (he's named 'Pakshi'rajan) who is obsessed with snatching people's mobile phones away. Ironically, Vaseegaran's girlfriend Sana (who seems to have mythical levels of patience with him) from the first film, played by Aishwarya Rai, is reduced to a tinny voice in the mobile phone. Their romance, which played such a big role in the first film and gave us some truly memorable songs (2.0 has just two full-fledged ones, neither of them as good as the first film's album), is a mere footnote in this one. As mobile phones start flying from everyone's hands, scientist Vaseegaran is called to weigh in on the phenomenon. We know where this is going. It's a set up for the dismantled Chitti (also Rajinikanth) to be put back again and brought to life. Shankar exploits the 3D technology to a hilt - cellphones rising like a tsunami wave to engulf roads, homes; cellphones swarming to form shapes that dissolve and re-organise into looming threats, cellphones gliding into the insides of human beings (is that a comment on how we're consumed by technology and it also consumes us?) and ripping them apart.

It's not until the interval point that we're told why. Why is all this happening? Who is this villain who seems to abhor cellphones even more than the average principal of an engineering college? Unless you'd been living in an island without any cellphones for the past few years, you'd know the character is played by Akshay Kumar. You can see why the Bollywood plug is there. This is India's most expensive film made till date and it needs a pan-Indian appeal to make its money back. But Akshay Kumar's Pakshirajan is a complete let-down as is minor villain Sudhanshu Pandey whose acting batteries need urgent recharging.The lip sync is off in many places and neither of them is able to make an impact despite the imaginative fight sequences that Shankar conjures up. This is because we don't care about any of the characters on screen - when the bad Chitti comes in towards the climax, you can feel the audience responding at last. Here's someone they finally feel something for, because they remember how much fun he was in the first film. 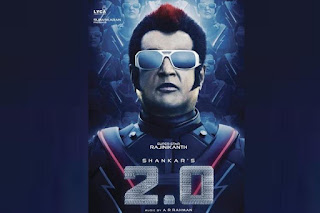 Pakshirajan's back story is visually beautiful (in a poignant frame, we see him doubled up over mounds of tiny bird graves, each honoured with a white flower) but written in such broad strokes that you really don't connect with his angst about the birds. I wish Shankar had invested more effort into making the science convincing. The vague references to 'energy' and 'aura' rather reminded me of the bizarre pseudo-science videos on 'Avatar Clicks' that we see a bunch of young people listening to early on in the film. In the second half, especially, the growly voice that Akshay's character employs is distracting and you can barely make out what he's saying through the background score.

Amy Jackson plays Nila, a "domestic" robot (of course, it has to be a female robot), who comes to the rescue of both Vaseegaran and Chitti at different points in time. She's also the one to provide some unexpected comedy in the film, making Tamil pop culture references that are invariably funny, coming as they do from her. The first time Nila hears Chitti's name, her hair flies, just like a human heroine's would. And though the film somewhat confines her to being a "minsara samsaram" (you've got to applaud the brilliance of that line) to Chitti, at least the script gives her something to do other than look pretty. I did wonder though why Chitti had to molest her as soon as he turned into his "bad" avatar - in a perfect universe, a female robot would have some kickass self-defence techniques coded into her and she wouldn't have to resort to an exasperated expression.

The mokka jokes in the film land well most times - the scenes with Kalabhavan Shajohn (despite the pronounced Malayalam accent) and Mayilsamy, for instance. When a cellphone "invades" their home and "Unknown" flashes on the screen, Shajohn asks, "Who is this Unnikrishnan?". It's absurd comedy but it's also what gives a human touch in the midst of the graphics overdose. Rajinikanth is restrained for most of the film but Shankar unleashes him in the climax - the robot who did the "mehhh" lamb bleats in the first film mocks a bird's call in this one. It's impossible not to be entertained when Rajinikanth is playing the bad boy; he does it with so much relish. But the climax also gives one a sense of deja vu. The exponential number of Chittis running and forming armies was new when we watched Enthiran; we're now a pampered audience which wants more, something that will make us sit up again.

Despite the convincing VFX, we don't feel invested in the gladiator-style battle between the two, our relationship with the characters remaining robotic. I also didn't care much for the forced EVS lesson in the end - I wish our filmmakers would write scripts that make us feel the message rather than hold it up in neon towards the end like the moral stories we read as kids.

2.0 looks and feels like an extravaganza. It's the kind of ambitious film that you wish would succeed if only for the obvious effort put into it by the team. But if you ask me which film I prefer, Enthiran or 2.0, I'd go with the first one any day. Dot.

Disclaimer: This review was not paid for or commissioned by anyone associated with the film. Neither TNM nor any of its reviewers have any sort of business relationship with the film’s producers or any other members of its cast and crew.