A history enthusiast goes beyond the captions at the museum at the 18th-century ruler’s summer palace in Srirangapatna.

Visitors to the museum run by the Archaeological Survey of India in Tipu Sultan’s summer palace in Srirangapatna, near Mysore, have the opportunity of inspecting two painted portraits of the 18th-century ruler himself.

The one by GF Cherry is the popular portrait of Tipu Sultan. Since the late 18th century, it has appeared in a variety of books, magazines, journals and newspapers articles about him.

The other is a full-length portrait and has been attributed by the museum to the German artist Johan Zoffany. Here, the direct gaze of the subject falls on the visualiser in contrast to the depiction of the subject’s profile in Cherry’s painting.

Especially since the advent of the internet and social media, this painting has increasingly been appropriated into Tipu Sultan’s life story: it has appeared both online and in print as a definitive portrait of Tipu Sultan in his younger days.

The noted Tipu Sultan historian Kate Brittlebank has even incorporated this painting on the cover page of her biography, Tiger: The Life of Tipu Sultan.

I had been long fascinated with this portrait of Tipu Sultan both on account of my interest in the ruler’s history as well as my hobby as an artist who experiments in paint as well as pencil. The striking contrast between the tawny and near-corpulent Tipu Sultan in the Cherry painting and the slim Tipu Sultan in the Zoffany painting intrigued me. But I brushed it off as Tipu Sultan gaining in weight with the passage of years.

GF Cherry, who painted the first portrait, was the Persian secretary to Governor General of India, Lord Cornwallis at Srirangapatna. Anne Buddle, a noted historian mentions that a similar portrait by the same artist was presented by Lord Cornwallis in 1792 to Tipu Sultan’s mother. This work, after being passed on to Tipu Sultan’s youngest son Prince Gholam Mohammad, was gifted by him to the East India Company and is now in the British Library, London.

This portrait can be considered an authentic representation of Tipu Sultan on account of it being painted in the lifetime of Tipu Sultan and once, having been in the possession of both his mother and his son.

This image of Tipu Sultan is also congruent with the description of Major Allan, who was present on the spot when Tipu Sultan’s lifeless body was discovered in an archway, and mentions the ruler as having a “…short thick neck, small arched eyebrows, tawny complexion, (with) moustache and clean-shaven chin. He was inclined to ‘corpulency’.”

The second painting also wandered a little before it came to the Dariya Daulat Bagh Museum. Writes the British historian and author Denys Forrest:

“…. a full-length which, according to the Descriptive List (above), was presented to the Government of India by Sir P. C. Tagore in 1934 and hung in the corridor to the State Dining Room at Viceroy’s House. This picture was then attributed to Zoffany, but I have been unable to obtain any further details of it.”

It’s clear that the painting was already attributed to Zoffany before its arrival at the museum in Srirangapatna.

However, when I delved deeper into art history, I realized that Zoffany’s style of painting was very different from this painting of Tipu Sultan attributed to him. Renowned art historian Mildred Archer had this to say about him: “Zoffany found it difficult to suppress his interest in bounding movement and love of histrionic gesture.”

That is evident from Zoffany’s “The Impey Family listening to strolling musicians” (1783-’84), “Warren Hastings with his wife” (1783-’87), “Col. Mordaunt’s Cock Match” (1784-’86). But the painting of Tipu Sultan has the subject standing idly looking ahead without any semblance of movement whatsoever, something quite different from the regular works of art attributed to the artist.

Besides this oddity, Zoffany is known to have visited Calcutta, Lucknow and Delhi but neither Mysore nor Srirangapatna during his travels in the subcontinent.

It was during this research on this painting and European art history in India that I also started to look at paintings by another artist Tilly Kettle (d.1786) who was in India between 1769 and 1776. While explaining Kettle’s paintings, Pauline Rohatgi and Graham Parlett write, “Kettle usually portrayed his sitters, their serious expressions largely devoid of emotion, against a plain or simple background.”

Kettle usually painted full-length portraits of his sitters having a direct gaze, with distinct elements like, the direction of the light source and shadows, stance of the foot and bearing of the sword.

This style is also noticeable in the Dariya Daulat painting. Besides, Kettle incorporated backdrops featuring part of a building or vegetation, often palm trees like the one observed in the background of the Dariya Daulat Bagh portrait.

This is in contrast with Zoffany’s style, with subjects showing marked expression, conversation pieces, and paintings often with varied complex backdrops and at times incorporating detailed paintings in display, while painting indoor scenes.

Tilly Kettle is also not documented as having visited Mysore or Srirangapatna during his time in India.

One evening as I was looking at art books, I had my breakthrough. I found the Dariya Daulat “Tipu Sultan” in a Kettle painting titled “Emperor Shah Alam reviewing the 3rd brigade of the East India Company’s troops at Allahabad.”

This subject in the Kettle painting not only looks exactly similar but wears similar coloured and decorated clothing as the subject in the Dariya Daulat museum painting. No doubt remains now that this was the same person depicted in both the paintings. It is obvious that Tipu Sultan could not have been present in Allahabad by the side of the then Mughal Emperor Shah Alam during his review of the English troops commanded by General Barker. This had to be somebody else. 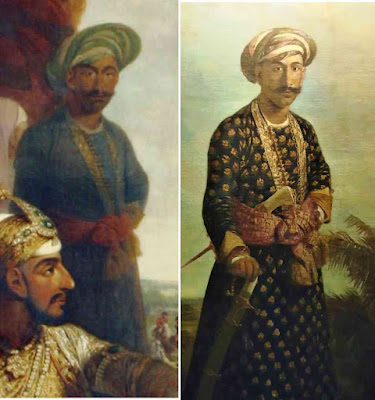 My subsequent research, that I will leave for another article in the future, shows why I’m certain that the subject in the painting is actually Salar Jung, brother in law of Shuja-ud-Daula, the Nawab-vizier of Awadh both of whom were present in Allahabad at the review of the English troops by the Emperor Shah Alam. Apart from his brief stint in Madras (1769-1771), Kettle was also the court painter of Shuja-ud-Daula and painted several portraits of Shuja-ud-Daula and his family members.

This means that the Dariya Daulat painting is a clear case of misattribution of both the painter as well as subject of the portrait.