The British loved their meat, but some were fascinated by Hindu-Brahminical vegetarianism

In ‘Meat, Mercy, and Morality’, Samiparna Samanta writes that the British in India thrived on an elaborate diet of meat, but some preferred vegetarianism in the tropical climate.

The nation’s national wealth was indicated through meat consumption: Britain was the heaviest consumer of meat in Europe. Several private memoirs, diaries, and letters of British officers and memsahibs attest that the British in India thrived on an elaborate diet of meat during the period.

The massive consumption of red meat at breakfast was merely an English custom transferred to a tropical climate, irrespective of its suitability. During the early decades of Company rule in India, as Elizabeth Collingham’s work has shown, such ostentatious and unhealthy dining habits ‘served well to underline the status of the Company grandee in India’.

However, with the increasing racialization of the Raj after 1857, the body of the British official in India became an even more powerful signifier of ‘Britishness,’ and diet and dress became, accordingly, cultural sites on which a sense of bodily difference between the British and their Indian subjects was maintained. According to Collingham, the lavish consumption of food and drink by the British in India was reminiscent of the nabob and continued to construct the official’s body as an aristocratic body in the Indian context. Over time there might have been a refinement of the eating etiquette compared with the meat-eating excesses of the earlier period, elaborate meals continued to be the norm.

Some Europeans in India, however, advocated vegetarianism. Tristram Stuart discusses the European fascination with Hindu-Brahminical vegetarianism in the early years of the Company rule. According to Stuart, the most surprising to western travellers in India were the masses of ordinary people who lived on what Europe considered an exceptionally abstemious diet.

Stuart closely examines a few European travellers in India—Thomas Tryon and John Evelyn, among others—to demonstrate how they drew from Hindu theology and enshrined Indian vegetarianism in the mainstream of intellectual debate. The revered Jesuit missionary Abbe Jean Antione Dubois composed a tract, Hindu Manners, Customs and Ceremonies, where he depicted ahimsa as a cowardly and effeminate doctrine, but sought to explain the real historical origin for vegetarianism through climatic compulsions.

According to Dubois, meat was indigestible and putrid in a tropical climate His suggestion was endorsed by a widespread tradition of European tropical medicine like the work of British naval surgeon, James Johnson, who, in his The Influence of Tropical Climates, More Especially the Climate of India, on European Constitutions (1813), applied the principle of temperance very strictly. H

aving identified over-stimulation and a tendency to plethora as the greatest risk to the Europeans newly arrived in a tropical climate, he recommended a cooling vegetable diet. Johnson’s recommendations were based on the eighteenth-century view of a vegetable diet as an antiseptic regimen which cleansed the bodily fluids of impurities while meat, as a stimulant, induced plethora, especially if taken in large quantities.

Collingham argues that the Brahminical prohibition of wine and meat, as well as the simple diet of rice and vegetables of the Hindu poor, appealed to the temperance-minded British physicians as a laudable Indian custom, which contributed greatly to the health of the Indian population. Thus, British physicians like Johnson held up the Brahmins as models of ascetic, suitable behaviour. Having said that however, Collingham notes that most Anglo-Indians took little heed of arguments in favour of the vegetable diet and many resisted medical attempts to Indianize their constitutions.

Thanks to the lavish consumption of meat by the British in India, stomach disorders were inevitably common, but everyone blamed the climate rather than the unsuitability of their diet. The Governor, Philip Francis, thus wrote in 1775, which attests to the over-indulgence in meat: ‘I am tormented with the bile and obliged to live on mutton chop and water. The Devil is in the climate I think.’ These ostentatious eating habits were, as Burton argues, deployed as the cultural markers of a masculine, physically superior British Raj. In a similar vein, John Beames wrote about their daily eating habits:

Our chota haziri, or little breakfast, was at five-thirty to six, and consisted of tea, eggs boiled or poached, toast and fruit.

Breakfast at eleven consisted of fried or broiled fish, a dish or two of meat—generally fowl cutlets, hashes and stews, or cold meat and salad followed by curry and rice and dessert. We drank either bottled beer—the universal Bass— or claret. Between four and five there was tea and cakes. Dinner at half past seven or eight consisted of soup, and entree, roast fowls or ducks, occasionally mutton, and in cold weather once or twice beef, an entremet of game or a savoury, and sweets.

If the gastronomic delights of the British were considered to be a metaphor for a physically superior Raj, the native kitchen was however very bleakly portrayed as symbolic of all that was filthy, dirty, and uncouth about Oriental cultures. The author of a cookbook described a typical kitchen in an Anglo-Indian compound as ‘a wretchedly mean, carelessly constructed, godown [outbuilding] … inconveniently far from the house, and consequently open to every passer-by.’ 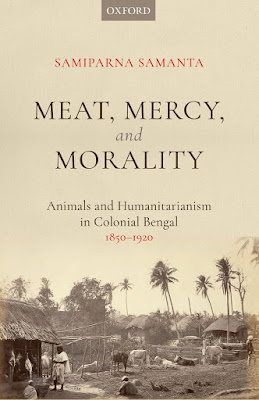 This excerpt ‘Meat, Mercy, and Morality: Animals and Humanitarianism in Colonial Bengal, 1850–1920’ by Samiparna Samanta has been published with permission from Oxford University Press.