A strong magnitude 6.9 earthquake has struck off the coast of Papua New Guinea's New Britain island, the US Geological Survey (USGS) says.

Hazardous tsunami waves were forecast for some coastlines but there were no immediate reports of damage.

The USGS originally estimated a shallow depth of 10km but later revised it to 35km. 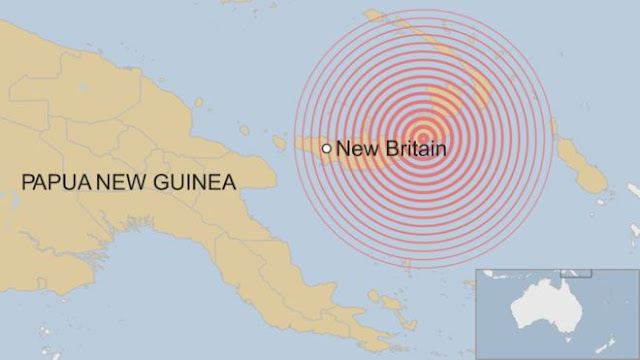 Dellie Minding, a receptionist at the Rabaul Hotel in the east of New Britain, told Reuters news agency the earthquake had been felt, with many guests running outside, but there had been no damage.

At the Rapopo Plantation Resort on the coast, receptionist May Dovon said she had not heard of any casualties or damage, the agency adds.

"We felt the earthquake, everything was moving so we went out of the building," the receptionist told Reuters. "Nothing was damaged."


The country is still recovering from a magnitude 7.5 quake on 26 February.

It took weeks to establish the full extent of damage in the remote, worst-affected areas.