Uber is adopting a sharing model that has swept Chinese cities, often to the annoyance of pedestrians and city planners, and that has made its way to US cities in the last six months.

According to a blog post Thursday (Jan. 31), Uber is offering the pilot dockless bike rental service to a select group of users in San Francisco, via a partnership with Jump Bikes, (formerly known as Social Bicycle), a company that powers bike-share schemes all over the US. Unlike most of the services from Jump Bikes and Motivate (which powers the docked bike program in New York and other cities), Uber and Jump are offering electric bicycles, and they don’t need to be dropped off at specific parking stations

Unlike most of the services from Jump and Motivate (which powers the docked bike program in New York and other cities), Uber and Jump are offering electric bicycles, and they don’t need to be dropped off at specific parking stations. 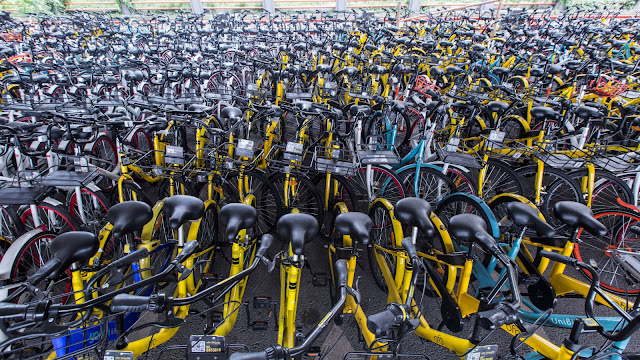 Opening the app and going to the “Bike” icon will unveil a map of nearby bicycles. Users can unlock a bike with a pin number that Uber sends. The company is charging $2 per minute. “Once the ride is complete, you can lock the bike to any public rack in the bike zone shown on the app’s map,” writes Uber’s head of policy and transportation research in another post.

Uber is actually late to dockless bike-sharing, a business model pioneered in China. Throughout 2016 and 2017, dozens of startups filled Chinese city streets with bikes that users could unlock with their smartphones, ride for a few yuan per minute, and park anywhere they pleased. A funding war created two billion-dollar companies—Mobike and Ofo—and many more casualties. Meanwhile, the companies’ “park-anywhere” policy led to bikes piling up in sidewalks, office parks, and ditches, where they’d been either abandoned or confiscated (though they’ve introduced policies to encourage riders to park them in high-traffic locations).

Lots of people have posted pictures of piles of shared bikes in #China but I haven’t yet so I figured I should join the club. Seen in random back alley near city center pic.twitter.com/v7WKgiOrKM
— Deathblade (@deathbladeISSTH) January 11, 2018


In the United States, after a cameo appearance at Austin, Texas’s SWSW festival, dockless bike rental made proper city street debuts last summer, as Spin and LimeBike started up in Seattle (both of them already offer services in San Francisco). In the fall, Mobike and Ofo each expanded to the US, beginning with Washington, D.C. and Dallas, respectively. Just like in China, consumers and regulators are starting to complain about pile-ups and obstructions. In Dallas, which particularly embraced dockless bike-sharing and where Ofo alone now has some 10,000 bikes, City Hall has called on bike companies to mend their ways and is contemplating rules.

@limebike your bikes at the corner of Mangum and Seminary are impeding the sidewalk. pic.twitter.com/05Tbt4ymZH
— Ross Grady (@rossgrady) February 1, 2018

I gotta think the answer to this question is the @Mobike next to the upside down Mercury at Logan Circle. #bikeDC https://t.co/Bd5AWEtCZ5
— Dockless Bikeshare Is The Devil (@DocklessB) January 30, 2018


Uber did not reply immediately to questions about how it will ensure its bikes are parked in public racks.

Uber’s move follows a similar announcement from Didi, its former Chinese nemesis (arguably, it continues to be an arch-rival with investments in overseas Uber competitors). In January, the Chinese company launched a bike-sharing service inside its app that lets users ride vehicles from Ofo and Bluegogo, the once number-three player that Didi took under its wing.

It’s not clear if dockless bike-sharing is a winning business model, given the slim margins and logistical headaches. But to some degree, Didi and Uber’s near-simultaneous entry into the sector validates the trend. For Didi, the company is reportedly losing rides to bike-sharing (paywall), as Chinese consumers opt to hop on the nearest Mobike for a short-distance trip rather than hail a car. As bike-sharing spreads across the United States, Uber probably fears the same.