Media Mogul Oprah Winfrey is in the headlines again, not to say for the bad reasons! People haven’t forgotten that she was in India, for the first time, in January to shoot an India special for Oprah's Next Chapter. The series was aired on Discovery Channel and its affiliate TLC - The Lifestyle Channel - over the weekend. So what? There lies the crux of the story. Winfrey's negative take on India in the show has been largely criticized. 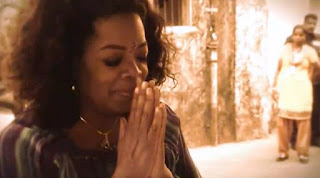 During her visit, Winfrey visited a Mumbai slum, the Jaipur Literary Festival, where she taped an interaction with noted writer Deepak Chopra, a widow’s home in North India, rounding off with a must-see trip to the Taj Mahal. The episode also filmed Winfrey spending time with families, from the slum-dwelling poor to millionaires, including being escorted by Indian film icon Amitabh Bachchan and his family to a glamorous Bollywood party hosted in her honour by leading Mumbai socialite Parmeshwar Godrej.

Watching the show – yes, I must admit, her talk shows are addictive and I often end up watching some of them, compromising with some hours of my sleep -- I was shocked to see her take on India and Indians.

She was guided through a slum in Mumbai by Gregory David Roberts, the author of Shantaram, and went to meet a family of five. She was surprised to see the family – parents and three children – living in a 10x10ft room. She was surprised to see the whole family living in a small space. But what was most shocking was she asked the children how they could live in such a “tiny” room and actually wanted to know, “Don’t you feel it’s too cramped?” She asked the, if they were happy living in such a small place. Maybe the children, who are happily living with their parents, might have wondered why she’s asking such a foolish question! Not enough of her queries, she asked the father if “he was happy and satisfied”, which made the man to get tears in his eyes. All he said was he wished he could earn more and provide for a more comfortable life for his children. Adding to the woes, Winfrey didn’t keep quiet, after making the man weep in front of his family, she said that she knows how awful it is for children to see their father weep!

In fact, she looked for a shower head in the toilet and was amazed to hear that the family bathed with a bucket! She was astonished by the fact that all their clothes fit onto a small shelf. Why didn’t she ask the family how they enjoyed the big LCD TV that adorned their walls? Had she mentioned about the TV, maybe it would have killed the whole purpose of her visit to the slum, to their house. The painful story would have been marred by the mention of the TV! When their older daughter told Oprah that she’d like to go to London to study further, Oprah played her role as American ambassador. She said: “No. Come to America, it’s a lovely country. It’s the best.”

After visiting the slum, she visited a rich joint family, which was dressed in full Indian regalia, in Mumbai. They served her a meal in silver plates and bowls. She looked at the food and asked one of the family members, “So I hear some people in India STILL eat with their hands”. I felt like screaming at her ignorance or maybe arrogance… Which Indian will not get angry at her question? I wondered if people in the US eat pizzas, burgers, sandwiches and tacos using forks and knives, or I don’t know if they have some other cutlery for them!

Then, decked in Tarun Tahiliani’s designer saree, she headed towards Bachchan family. There she met the family and saw Aishwarya Rai and Abhishek Bachchan’s child and said the baby was “lit from within”. Sorry, I couldn’t understand what she meant by that! 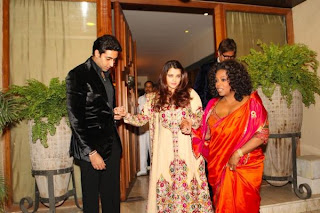 Later, she went to the party thrown in her honour by billionaire socialite Parmeshwar Godrej. She wondered at the paparazzi outside the Bachchan home, which is quite impressive on any given day. AT the party, she said hi, hello to Priyanka Chopra, Shiamak Dawar, Anil Kapoor and other Bollywood stars. She interrogated A.R. Raman – sorry, that how she called him, Raman not Rahman! She talked to him about how “even he lives with his mother and whether he loves his wife who he had an arranged marriage with”.

Leading news channel CNN-IBN posted an “open letter” to Oprah Winfrey from an Indian who eats with her hand” on its website penned by Rituparna Chatterjee. The letter read: “Oprah, your comment about eating with the hand is really not that big a deal to us; we are used to gross Western ignorance regarding our ancient country. But as a responsible public figure about to air a show that will be beamed across the world, you should have done your homework. Using our hands to eat is a well established tradition and a fact none of us are ashamed of. Our economic distinction has nothing to do with it. A  millionaire here eats the same way a pauper does. You have been to Asian nations. You should know that.”

Questioning Winfrey's motives, Chatterjee added, “Poverty is an inseparable part of India, you say, and seek out the human stories that make the grind bearable. But which India have you come looking for? The one that shops at state-of-the-art supermarkets and vacations abroad or the one whining about their misery in tiny holes of homes with LCD televisions on the walls? The India that scrapes by with $200 a month but sends its children to subsidized government schools to pick up fluent English? The India of your press information - fascinating, with its many-headed goddesses and grimy, naked children playing by roadside hovels - or the India of the future - an economic superpower that looms large outside the range of an average American's myopic vision?”

A critique of the show by online news site Firstpost.com writer Rajyasree Sen described the two-episode series as “myopic, unaware, ignorant and gauche. This was Middle America at its best worst”.

Winfrey's tour of a Mumbai slum, where she met a family of five living in a cramped room, was also criticised by Rajyasree Sen. She said: “And the slum is where Oprah’s 'oh-my-god-how wonderfully-pathetically-quaint-to-be-so-poor' avatar stepped out in full glory. .. Now I’m not surprised that Oprah was surprised to see an entire family living in such tiny quarters. Although I’m sure she could find cramped ghettos in the U.S... She did look for a shower head in the toilet and seem amazed to hear they bathed with a bucket. And she marveled at how all their clothes fit onto a small shelf. She pointedly avoided any mention of the massive LCD TV which adorned their wall. That would have killed the sob story. When their older daughter told Oprah that she’d like to go to London to study further, Oprah also played her role as American ambassador to the hilt and said, “No. Come to America, it’s a lovely country. It’s the best”.”

Another leading newspaper group Dainik Bhaskar posted the headline “Snobbish Oprah Mocks India” and said: “In a typical American snooty style, the talk show queen tried to portray a superficial ‘sob story’. Oprah was anything but a good guest when she went around the small room interrogating the family members about their ‘poor’ living style and ‘miserly’ living.”
In its coverage of how the show got a “thumbs down”, India Real Time – not to forget it’s the Wall Street Journal's India-specific blog -- said: “The smell of incense (tick), the sari fitting (tick), the aspirations of slum dwellers (tick), and the glitz of Bollywood (tick). Let’s not forget arranged marriages and the fact that Indians, even rich ones, “still” eat with their hands (tick, tick). India as Westerners imagine it, one stereotype at a time.”

On the other hand, a few of the many online comments to the India Real Time story supported Winfrey's coverage of India's reality. “The views Oprah presented are cliched BUT TRUE! I am an Indian who lives in the U.S... To many middle and upper class families, the India Oprah presents simply does not exist. I was shocked to speak to members of my family and they denied that people are dying of malnutrition and starvation below their very ivory towers,” said a post by RJ.

Some even say that Oprah showed what’s reality and there’s nothing wrong in what she did. “Oprah showed what she saw in India. What’s wrong with that? If we can’t clean up our act, then we have no business feeling offended,” said another post by Esh.

Is it something to do with how India and Indians are projected after Slumdog Millionaire? Maybe, who knows? Many people in the West think India is filled with slums and Indians have been stereotyped like that everywhere. “Since the time Danny Boyle’s Slumdog Millionaire, Indians have been stereotyped everywhere like that. Whenever I’ve met someone, they do mention Slumdog Millionaire, as if every Indian was that. For many in Europe, India is what is shown in Bollywood movies, women are sexy, wearing short skirts and barely covered bodies and couples sing and dance around trees and in public areas. They are not able to differentiate the real life from movies. The most common stereotype in Europe about India is that there are a lot of people in India dying or dead on the streets. Many are scared to visit India, just because there are too many people,” said a post by Gajendra K.

So I’m not the only one who’s criticizing Oprah’s take on India, a whole lot of Indians are also of the same opinion.
Posted by Arjunpuri in Qatar at 19:07