The love story of Jayamma and Chikkanna is no longer confined inside the walls of the Devaramuddanahalli village in Karnataka’s Hassan district.

According to reports, when they were young in love, their parents did not agree to their union hence they were separated. From growing up together to falling in love, Chikkanna and Jayamma had too close to forget about each other. Even though both the families knew each other well, Jayamma’s parents did not let her marry Chikkanna as he worked as a labourer. She was married off to someone else in the same village. 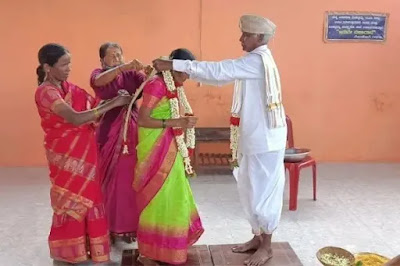 Being heartbroken, Chikkanna left the village and moved to another village called Metagalli near Mysore and continued to earn a living as a labourer. He chose to never marry anyone else. Jayamma and Chikkanna did not see each other after Chikkanna left the village but he used to enquire about her whereabouts from mutual friends and relatives. As per reports, Jayamma too was unhappy in her marriage. She had given birth to a son and continued to stay with her husband. Her husband reportedly left her and the house. After that Jayamma went to Mysore to live with her son. That is when Chikkanna got in touch with her.

Speaking to the media, Chikkana said, “She was always in my thoughts. For whatever reasons we couldn’t unite then, we decided to start our lives together until the end. At least in our final years, we can be with each other just like how we used to dream once.” The news of their wedding has gone viral now.

As per the report, Jayamma’s 25-year-old son was unaware of the wedding at first as the couple wanted to keep their relationship hidden till Jayamma’s son got married but the news travelled and reached everyone.