If he wins a second term, Trump's priorities will drastically change. And that's a big problem for all of us

Until now, the president has been focused on re-election. But that won't be the case if he wins in November — instead, he'll take a hard pivot toward protecting his own personal interests

John Bolton’s motivations were clear. He wanted to cash in with his new book and settle many a score. But what his revelations suggest about Donald Trump’s motivations are even more troubling than his own.

The former White House official wrote his former boss was not driven by any world view or philosophy. He warned that policy is made in what White House and across the Trump administration, as anyone paying close attention could discern, in a haphazard and rather sloppy manner.

Bolton concluded that, as always, the lone philosophy driving the president was Trumpism. Translation: Win at all costs.

“I am hard-pressed to identify any significant Trump decision during my tenure that wasn’t driven by re-election calculations,” Bolton wrote. 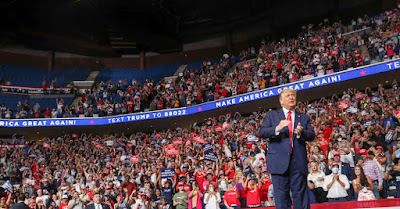 Bolton wrote that many of the president’s discussions with other foreign leaders were mostly about his own re-election. To that end, he claims Trump “pleaded” with Chinese president Xi Jinping to help him win re-election in 2020 by purchasing more US farm products.

At a one-on-one meeting during a global summit in Japan in the summer of 2019, Xi expressed his dissatisfaction with some critics of China within the United States. Trump mistakenly assumed Xi was talking about Democratic lawmakers, according to his then-national security adviser.

The thought pattern is vintage Trump. The president thinks about the politics of just about everything first, second and third, meaning how a decision or policy move might impact his own political future.

“Trump immediately assumed Xi meant the Democrats. Trump said approvingly that there was great hostility among the Democrats,” Bolton writes. “He then, stunningly, turned the conversation to the coming US presidential election, alluding to China’s economic capability to affect the ongoing campaigns, pleading with Xi to ensure he’d win.”

What, then, if Trump, as he did facing similar national poll numbers four years ago, defies expectations on Election Day and wins another term?

Republicans, just about every serious political prognosticator is predicting, would fall well short of the votes needed in Congress to change federal law to allow the president to seek a third term.

That would remove re-election from Trump’s mind as he makes all kinds of decisions about policy, foreign and domestic.

We have enough evidence, mostly drawn from the president’s own words and actions, to make educated guesses that his businesses and his post-presidency legal status would become paramount.

He has never really stopped worrying about the former. And he went a long way towards confirming the latter last Friday night.

That’s when Trump approved the firing of a key US attorney believed to be investigating him and some of his associates. His top spokeswoman confirmed the president’s involvement, but only after yet another confusing few days at the White House.

Attorney General William Barr said Saturday that, with Mr Trump’s approval he had fired Geoffrey Berman as the US attorney for Manhattan, a post that saw him oversee the Southern District of New York. The powerful branch of the Justice Department has been investigating a list of things Trump, which has reportedly angered the president.

After a back-and-forth between Barr and Berman that remains murky, White House Press Secretary Kayleigh McEnany on Monday said Berman “decided not to leave” his post in New York and take a desk job in Washington, prompting Barr to seek permission to fire him.

“At that point, that's when the president agreed with the attorney general,” she said. “He was involved in a sign-off capacity.”

It took the presidency two days to come clean about his role in moving out of the way yet another senior Justice Department official who has been examining Trump World. Whether the murkiness and confusion are intentional – designed to obfuscate the reality of a president Democrats and some Republicans say sees himself as above the law – or merely another product of a White House that has never figured out how to get its story straight.

But the president’s willingness to paint himself as innocent in the Berman affair only makes images of a second term focused on protecting his own hide legally more troubling.

“Well, that’s all up to the Attorney General,” Trump said. “Attorney General Barr is working on that. That’s his department, not my department. But we have a very capable attorney general. So that’s really up to him. I’m not involved.”

But the president has told us over and over that he – not the FBI director and not the attorney general – is the country’s “top law enforcement officer.” And current and former Justice Department officials told a House committee this week that Trump is very much involved, pressuring Barr to help his friends and help his political prospects.

Aaron Zelinsky, a former lawyer on Mueller’s team who worked on the DOJ’s criminal case against former Trump campaign adviser Roger Stone, told the panel that the president’s longtime adviser and friend received “unprecedentedly favourable treatment because he was ‘afraid of the president.’”

A Justice Department that fears a second-term president motivated by what federal prosecutors might have unearthed about him, his family and close associates? It is not difficult to image Mr Trump, angered by news reports about what the Southern District of New York (SDNY) might have found, firing all the Bermans that come along.

His requests of other world leaders likely would grow more and more bold and self-focused. Whether the Justice Department could resist Mr Trump’s every bout of rage-watching cable news seems unlikely, especially with an AG like Barr at its helm.

“Everything, every last thing Trump does, serves Trump's own interests. Who leads SDNY is no exception,” Walter Shaub, a former White House ethics chief, tweeted amid the chaos on Saturday. “The only unknown is how big a price America will pay as a result.”