The following extract is a piece by Simon Barnes, the chief sports writer with The Times, UK, from the book Sachin: Cricketer of the Century (2013) by Vimal Kumar. 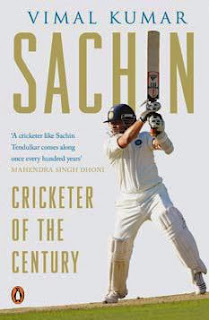 The most important thing about Sachin's batting is that there is no single important thing to say about it. He doesn't really have a style. In a sense he doesn't even have a personality: or, to be more accurate, personality is something he seems to be able to set aside at will. He seems to have the ability to remain untouched by the circumstances of the match or the personality of the bowler. Poor bowling doesn't get him excited at the chance to cash in; very good bowling in helpful conditions doesn't make him worry. He doesn't really do situations at all: he just bats.
More than any cricketer I have ever watched, he has the gift of playing only the ball. He's never surprised by a bad ball from a great bowler nor by a dangerous ball from a poor bowler. He somehow keeps the bowler out of the equation: the ball is all. He meets it all with the same bland eye. You can't tell whether it all matters hugely to him or whether it doesn't matter at all. He has the very rare gift of playing in the moment. Some players love drama, confrontation, imposing their own personality on a great match, a great occasion. Sachin just hits the damn ball.
There is something Zen-like about this. I am reminded more than anybody else of Pete Sampras, the tennis player. Sampras's first serve was brilliant, but his second serve was better, in that he was almost equally dangerous and very, very rarely missed. In the great Wimbledon final of 1999 against Andre Agassi at his very best, Sampras won in three sets that went far beyond brilliance. He won on a second-serve ace. Someone asked him afterwards: 'What was going through your mind at the time, Pete?' Sampras answered after a puzzled pause: 'There was absolutely nothing going through my mind.'
Perfect.
I wrote at the time that this was pure Zen, and I received a letter from a real Zen master, who totally agreed. Sachin has something of the same ability: to not get distracted by conscious thought, by ambition, by hope, by despair. He just plays the ball. Whether he hits it for four, whether he plays or misses, it's all one to him. He takes guard and faces the next ball and plays it, leaving it or smiting it, as the ball demands. The only time I have seen him affected by a situation was when he was close to that hundredth 100 and was out for, I think, 94 at the Oval. I think for once he was entitled to feel the pressure. After all, he's the first person ever to have felt it.


There are some big things to be written on Sachin as a living symbol of India's headlong charge into the modern world. He is a validation, a living emblem of the truth that an Indian can be the best in the world, the best ever, if you like, and can do so without appearing to break a sweat and without needing to ask anybody for any favours. In this respect, he is rightly compared to Don Bradman. Other cricketers who had national importance include Denis Compton, who was a symbol of optimism and elegance as Britain sought to rebound after World War II, and Sir Frank Worrell, who stood for regional and racial independence, freedom and pride.
Posted by Arjunpuri in Qatar at 07:30