In 1934 the police force in Zaragoza, Spain, was called in by a deeply concerned family. It seemed an uninvited guest had been bothering them for several weeks and simply refused to leave their house or leave them alone.

Greeted at the front door by Mrs. Palazón, who by now was already going out of her mind, the chief policeman wasted no time. He began questioning the suspect right away:

Who are you? Why are you doing this? Do you want money?

He got one simple “no” from the other party in return. He asked: Are you looking for a job? For who knows, why not. Yet, the answer once again was a cool, short, and straightforward “no.”

Annoyed now and with his patience running thin, the policeman threw his last question: Then who are you, what is it that you want, man?

The answer to this question was what actually made this case so interesting, almost 85 years after it happened. “Nothing, I am not a man,” came a reply from what seemed to be an ordinary chimney. 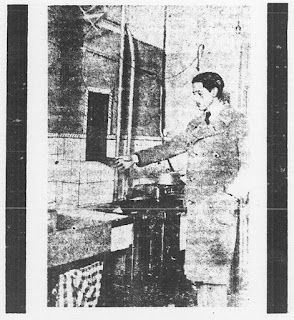 Yes, the policemen were talking to a chimney, one that had a special connection to the stove.

Only it wasn’t so ordinary, because it was talking back. Not only to the Palazón family but also to the neighbors. It was not like the case of a seemingly talking chimney in Morganton, North Carolina, at the beginning of the 20th century.

That had turned out to be picking up family quarrels, church music, and workshop noise from around the area through echoes in the sewage system. No, no, this chimney was asking questions.

It was answering them as well. It was a rude, ill-mannered, and insolent chimney that at one point even threatened to “kill everyone in the room.”

It was one day in September when the Palazón’s first heard maniacal male laughter that was emanating from behind the walls in the kitchen of their duplex apartment on what was then Gascón Gotor Street.

At first, they assumed that the neighbors were making the ruckus. There were screams, shrieks, and all kinds of different unidentified noises along with the laughter that would come and go out of nowhere, and got louder when the family opened their stove.

But then, on the evening of September 27th, the maid, Pascuala Alcocer, was in the kitchen finishing up with the dishes when she heard the voice calling her name followed by a burst of prolonged sinister laughter.

Scared to death, she woke up her mistress to tell her what happened.

For the next couple of days, the voice would appear randomly, sometimes as early as 5 A.M., often times calling out to the maid as if it had some strange fixation with her.

Occasionally it would just tease people when they approached the kitchen. It was like it was an all-seeing entity, fully aware of what went on in the house–or at least in front of his home, the stove.

The Palazón’s were almost certain that an invisible Duende, a goblin-like supernatural being from Spanish and Latin American folklore, was for some reason living inside their stove and talking through the chimney.

They told their neighbors and asked for help, at least to ease their minds that they weren’t going crazy. Intrigued, they came over and, what do you know, the voice would great them with a “hello.” So crazy they weren’t.

Without options of what to do next, the troubled family called the police. Word about an invisible goblin living on Gascón Street had spread throughout the neighborhood, so the police came to check out the outlandish claims.

It was mid-November when the first conversation between the police force and the chimney took place. To their surprise, each officer was greeted by name by the strange voice as they entered the kitchen. 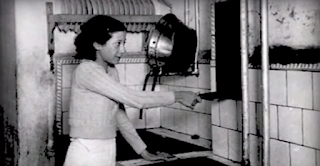 Baffled, but believing it was an elaborate hoax, the police arranged for the Palazóns to be relocated to another residence while the apartment was thoroughly investigated.

From the moment people living next door heard about the family moving out, mass hysteria spread through the community.

It became a nationwide sensation–hundreds flocked the street from every corner of the city to see, or maybe talk with, the haunted stove. Even the London Times began to cover the story. and a radio station from Barcelona was tempted enough to try and set up a microphone for a live radio broadcast with the stove’s chimney as a talk show guest.

The case was the talk of what previously was a very pleasant but nonetheless a pretty boring town and over the course of the next couple of weeks, the Times wrote at least a dozen of articles about almost everything that went on.

In their first article, for instance, titled “A Polite Spanish Ghost,” released on November 24, 1934, they reported that at first a team of architects and construction workers were sent in to inspect the whole building but could not find anyone anywhere.

Reportedly, when the architect suggested his men measure the chimney opening, the voice simply said, “you need not trouble, the diameter is 6 inches.” He was right.

The police evacuated the building and brought in the army to cut off all electric and telecommunications from the outside. A police patrol was then assigned to guard the perimeter day and night and not let anyone or anything slip through.

From the very next morning, the voice was nowhere to be heard.

Nothing was found. Priests were called in to sprinkle the chimney with holy water and the Palazóns were brought back under the assumption that whoever was making fools out of them all was now gone, with all the army and the police around.

“Cowards, cowards, cowards, here I am,” was how they were greeted the very next morning after moving in again. “I will kill everyone inside,” said the voice returned, and the family swiftly left the apartment once more. Only this time, they left it for good.

The Governor of Zaragoza, upon hearing that the voice had returned, ordered the police chief to bring the whole family in for questioning and psychiatric evaluation.

On December 4th, the governor released a statement that the Alcocer, the family maid, was the responsible party.

She was, he alleged, suffering from highly unusual and bizarre condition called “unconscious ventriloquism,” apparently throwing her voice unknowingly.

Even though she was nowhere near the apartment for most of the time after their first few encounters and people swore they heard the voice when she was not around, the blame was firmly placed on Pascuala Alcocer.

The family she worked for left town, never to be seen there again, and the voice was last heard that December 4th.

The apartment block was torn down 40 years later, and the new building on the site is named “Edificio Duende,” the “Goblin Building.”

Was the whole thing a hoax? No one knows for sure. No one ever stepped forward to take responsibility. It was not clearly demonstrated how anyone could handle such an elaborate hoax over such a long time, and probably there has not been another case of unconscious ventriloquism such as this.

(Source: The Vintage News)
Posted by Arjunpuri at 10:30

The imprint of Periyar is visible in the evolution and the trajectory of the Dravidian Cinema, particularly during its most significant peri...