Kim Kardashian meets the woman she helped free from jail

Kim Kardashian has met with Alice Johnson, the woman she helped free from prison, on US TV.

The pair met for an interview on NBC's The Today Show, following Alice's release on 6 June.

Alice was sentenced to life in jail, with no chance of parole, in 1997 on drug trafficking offences.

But Kim pleaded with President Donald Trump for Alice's release in May 2018, which he granted.

During the interview, Kim says she first became aware of Alice's situation when she retweeted a video about her imprisonment.

She then asked her lawyers if she could do more to help and says she worked for months before meeting with the President to ask for her freedom.

She first contacted Ivanka Trump and said the pair had a "great conversation" about wanting to help women.

"It became this mission I didn't want to give up," Kim told Today's host, Hoda Kotb.

"I think to some people it might seem like: 'Kim made a phone call to the president and showed up.'

"We had been in talks and working on this for seven months. It wasn't an instant thing." 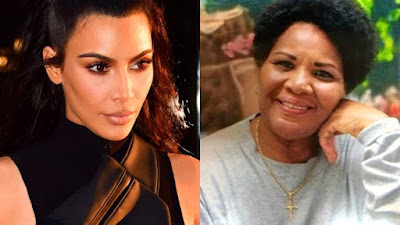 Alice says she had never heard of Kim Kardashian before finding out the reality star was pushing for her release.

"As soon as I found out who she was I started getting every magazine I could find, I started reading everything I could about her. I was amazed."

Earlier this year, Donald Trump said he believes some drug offenders in the US should be punished with the death penalty.

But Kim says during the interview that she believes he is already changing his mind on this.