Pope Francis has called Donald Trump‘s “zero tolerance” policy that leads to the separation of migrant children from their parents at the US-Mexico border “immoral”.

“Populism is not the solution” to America’s immigration crisis, the pontiff said.

Francis made the comments in an interview with Reuters.

It comes as Republicans in Congress scramble to include a solution to the separations crisis as part of broader immigration reform.

Donald Trump has defended the policy as necessary and the fault of his political opponents, who he claimed wanted “illegal immigrants, no matter how bad they may be, to pour into and infest our country, like [the gang] MS-13”. 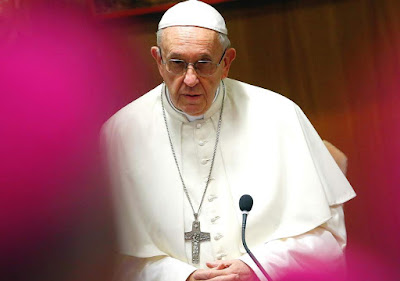 His administration’s “zero tolerance” stance toward undocumented migrants and asylum seekers who enter the US means it will seek to prosecute each one criminally. Because their children cannot be taken to jail due to prior legal rulings, they are separated and put into the Department of Health and Human Services’ care.

Images of children held in cages have prompted bipartisan and international criticism.

Republicans in Congress are currently trying to create provisions to end the separations within existing bills aimed at immigration reform. Mr Trump has said he is “1,000 per cent” behind their efforts.

The pope said populists were “creating psychosis” on the issue of immigration, even as ageing societies like Europe faced “a great demographic winter” and needed more immigrants.

Without immigration, he said, Europe “will become empty”.

(Source: The Independent)
Posted by Arjunpuri at 18:05