Marree Man: The enduring mystery of a giant outback figure

This week marks 20 years since a helicopter pilot flying over central Australia spotted the outline of a giant man drawn into the earth.

The 4.2km (2.5 miles) tall figure, on a remote plateau in South Australia, is often thought to depict an Aboriginal hunter.

Dubbed Marree Man after a nearby town, it is one of the world's largest designs to be etched into the ground.
But mystery surrounds who created it - and why.

Earlier this week, Australian entrepreneur Dick Smith offered a $5,000 Australian dollar (£2,800; $3,700) reward for any information about the artwork's origins.

"How has it been kept secret for 20 years?" he said on the Australian Broadcasting Corporation (ABC) on Monday.

'Professionally done'
Marree Man has been a subject of fascination since its discovery in the desert about 700km north of Adelaide.

It has gained popularity on tourism flights because it is too large to be viewed from the ground. 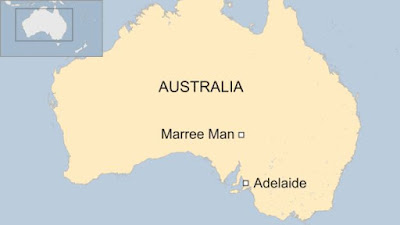 With an outline measuring a total of 28km, Marree Man had an initial depth of about 35cm (14 inches), according to local media reports.

Locals believe it portrays an Aboriginal man carrying a woomera - a throwing stick - in his left hand.

Marree publican Phil Turner says he is convinced that its creator, or creators, were "professionals" who possibly used GPS technology.

"Whoever did the outline marked it out with bamboo nursery skewers at every 10m," Mr Turner told the BBC.

"If you didn't have the co-ordinates, you would have no idea if you were standing in his left toe or his elbow. Considering GPS technology was in its infancy at the time, it is an absolutely remarkable feat."

Mr Smith agrees, telling the ABC: "There were no mistakes - it was very professionally done."

Several theories about its creators have circulated over the years.

Pilot Trevor Wright, the first to see Marree Man on 26 June 1998, says he spotted it by chance. But anonymous faxes were also sent to local businesses and media at the time, to inform them of Marree Man's existence.

Some suspected it was the work of American artists because the faxes used US spelling and references. A plaque showing the US flag and Olympic rings was also found at the site.

But others have theorised that those clues were deliberately misleading, with alternative suggestions including local artists and even members of the Australian Army.

'Mix of opinions'
The Arabana people are the traditional owners of the land on which Marree Man was created.

Arabana Aboriginal Corporation manager Lorraine Merrick said its appearance in 1998 had initially upset some Aboriginal people who viewed it as a desecration of their land.

She said there was "a mix of opinions now".

However, Ms Merrick said the corporation - which administers the land - recognised that Marree Man had become an icon.

"It's there now and you can't turn back the clock," she told the BBC. "So for us it's about working out a clear strategy for its future."

Marree Man has faded over the years, but locals, with the approval of the Arabana people, used machinery to help to restore it in 2016.

"Maybe the mystery is part of its attraction, but honestly I don't have people coming up to me asking who did it or anything like that," Ms Merrick said.

Email ThisBlogThis!Share to TwitterShare to FacebookShare to Pinterest
Labels: Australia