Harley-Davidson to make more motorcycles outside the US

Harley-Davidson plans to shift some motorcycle production away from the US to avoid the "substantial" burden of European Union tariffs.

Last week, the EU imposed retaliatory tariffs on US goods, including bourbon, orange juice and motorcycles.

The measures are a response to new US duties on steel and aluminium imports.

Wisconsin-based Harley-Davidson said the increased cost from the tariffs threaten its international sales, which it has been trying to expand. 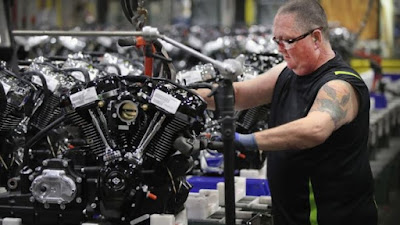 The company has assembly plants in Australia, Brazil, India and Thailand as well as in the US.

It said it would raise investment in its international plants, though it did not say which ones.

"To address the substantial cost of this tariff burden long-term, Harley-Davidson will be implementing a plan to shift production of motorcycles for EU destinations from the US to its international facilities to avoid the tariff burden," the company said.

Harley-Davidson said it expected the ramp-up in production to take nine to 18 months.

US President Donald Trump tweeted his disappointment at Harvey-Davidson's decision which he characterised as the company waving the white flag of defeat. 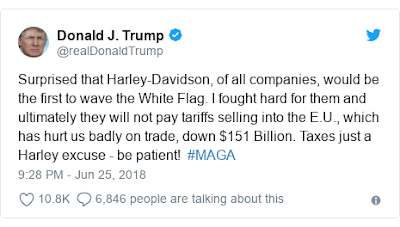 The company's move is one of the most visible consequences of the trade disputes triggered by Mr Trump's decision to levy tariffs on steel and aluminium imports.

Mr Trump says the duties are necessary to protect the US steel and aluminium industries, which are vital to national security.

They have drawn retaliation from the EU, Canada, Mexico, India and others while driving up the cost of metals for manufacturers in the US. 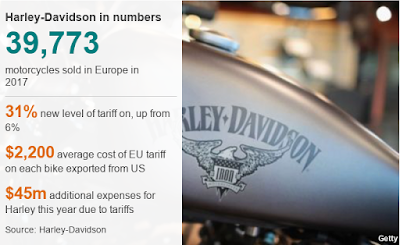 US companies that range from boat-builders to nail manufacturers have warned about the consequences of escalating trade tensions.

However, the tariffs have also helped to spur investment in US steel plants.

For example, British-owned GFG Alliance, has said it plans to invest $5bn over several years to reopen a shuttered steel plant in South Carolina. The firm says the move will put about 125 people back to work "immediately".

'Only sustainable option'
Harley-Davidson said the EU's tariffs would add, on average, $2,200 (£1,660) to each bike exported to Europe from the US as the import tax increases from 6% to 31%.

Harley, which sold nearly 40,000 motorcycles in Europe last year, said it planned to absorb those costs rather than pass them onto customers and risk hurting sales.

Shares in the company sank almost 6% after the firm announced its decision, which is expected to add between $30m and $45m to its expenses this year.

Harley-Davidson said the tariffs make shifting production "the only sustainable option to make its motorcycles accessible to customers in the EU and maintain a viable business in Europe".

Harley-Davidson, which has been focused on expanding its overseas sales, said it remained committed to US manufacturing.

The company employed about 2,100 people at manufacturing plants in the US at the end of last year.

It had already announced plans to close a plant in Kansas City, Missouri - a decision which workers claimed was due to the opening of a new facility in Thailand.

Harley-Davidson has disputed those allegations, arguing the move was about boosting overseas sales.

But just over a year later, Harley serves as a sobering example of what happens when Trump's America First trade policy collides with the rest of the world.

While Harley-Davidson had been struggling financially well before the EU's retaliatory tariffs went into effect, the import duties of 25% certainly didn't help matters. 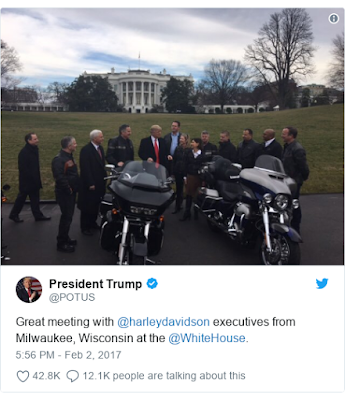 It is worth mentioning that Harley could make the decision to shift production because it had chosen, in 2017, to open a new manufacturing plant in Thailand.

At the time, the company said it was moving manufacturing there to avoid a different tariff: this one being the 60% duty levied on Thai imports. That decision, of course, was made after Trump decided to pull out of the Trans-Pacific Partnership, a trade treaty that Harley had said it supported.

All of which goes to show that when it comes to "winning" a trade war, the only certainty is the unintended consequences that inevitably result when decades of trade policy are reversed in a matter of months.

United Steelworkers, which represents some Harley employees and has supported some of the president's tariff announcements, said it does not know yet how the company's decision will affect US employment.

Michael Bolton, a director at United Steelworkers, said: "Harley's desire to improve sales both domestically and abroad predates the Trump administration's tariffs, as does the company's willingness to build assembly facilities overseas to avoid tariffs.

"The company built its reputation and image by making motorcycles here, and if the company wants to continue to market itself as an iconic American brand both at home and abroad, it needs to focus on US production," he added.

'Headwind to hiring'
Mr Trump had made raising manufacturing employment a goal, but economists warn that the escalating trade tensions are likely to be counter-productive.

In addition to the metals tariffs, the Trump administration has also said it will impose tariffs on $34bn of Chinese goods starting on 6 July as punishment for violations of intellectual property protections.

China is due to retaliate in kind.

Mr Trump has also threatened tariffs on foreign cars and auto parts, arguing that firms should make such products in the US.