A Labour MP who discharged herself from hospital and attended parliament in her pyjamas in order to take part in a Brexit vote has accused Tory whips of stripping her of her dignity.

Naz Shah, the MP for Bradford West, said parliamentary voting procedures were archaic and undignified after the whips refused her request to be paired with a Tory MP to cancel out each other’s vote – a practice that allows MPs to be absent from parliament with good reason.

She has been in hospital since last Friday with severe nerve pain, an ongoing complication from a hit-and-run collision several years ago.

When it became clear the vote on an amendment to the Brexit bill was going to be close, Labour whips asked her to leave hospital and make a four-hour journey to London to take part.

They told her she would be allowed to stay in the car rather than haul herself into the chamber, and whips would come to the car park to count her vote. But the Tories insisted she attend not just the vote but the three-hour debate preceeding it. 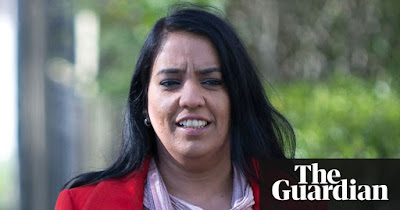 Shah was brought into the House of Commons in a wheelchair, carrying a sick bucket and dosed up on morphine. She said it was a humiliating experience.

“I was in my pyjamas. It felt personally very undignified and very invasive. It was embarrassing. I thought I’d just be able to stay in the back of the car, where I’d made a bed for myself, and be counted there, but the Tories wouldn’t have it. By making me go in to vote like that, they stripped me of my dignity.

“It wasn’t just me either. I was standing next to Laura Pidcock [the Labour MP for North West Durham], who is eight months pregnant and in agony because the baby is causing her back pain. She said it was like the Tory whips wanted her to prove that she really was in pain by attending. There was another MP [the Liberal Democrat Jo Swinson] who had to come in despite being two days over her due date. The system is just so archaic.”

Shah said doctors at Bradford Royal Infirmary had told her she shouldn’t travel but she felt a duty to her constituents. “They kept a bed for me because of the special circumstances,” she said in a phone interview from the back of the car on her way back to hospital.

She said the morphine made her queasy and she had been sick numerous times before she went into parliament.

“It was really inhumane,” she said. “No other employer would force you to come in to work in that condition. As MPs we are supposed to be setting the tone for the country, setting an example. We make the laws on equality and yet we don’t apply them to our own house.”

Shah’s effort ended in vain for her after the government won the vote on the amendment.

(Source: The Guardian)
Posted by Arjunpuri at 06:30

Email ThisBlogThis!Share to TwitterShare to FacebookShare to Pinterest
Labels: Brexit, Theresa May, UK