How ready are you for Japan’s next big earthquake?

Emergency kits are a must-have in earthquake-prone Japan, but a survey by The Japan Times has found that a number of people did not use theirs when a deadly quake rocked Osaka Prefecture and its vicinity last week.

The June 18 quake, which affected 30 percent of the approximately 250 people who provided valid responses to the online questionnaire conducted in its wake, prompted many to re-examine their preparations amid fears of a possible follow-on temblor, it found.

And while 42 percent of respondents said they have emergency kits both at home and at work, several revealed the need to better plan for earthquakes and other disasters.

A 32-year-old British woman who declined to give her name said her family of five — including her husband and three children — had “an iron-clad emergency plan and an awesome kit” in the event of a disaster. However, she hadn’t considered the prospect that a big quake would hit when she was neither at home nor at work.

“I was on a train to work, far from my home,” said the woman who lives in Osaka and works in Kobe. While the rest of her family was at home, she was stranded in a crowded train car for about two hours before passengers were led on a roughly 30-minute walk to the nearest station.

“I’ve been vigilant about keeping earthquake bags, but I realize they are important but limited in their role,” she said. “If you’re not at home or work, they serve little meaning at all. I naively didn’t consider that a big earthquake would hit on a Monday rush hour morning.”

A natural disaster can indeed strike at any time of day. The Osaka quake jolted Kansai at 7:58 a.m., just as commuters were heading to their offices, schools and elsewhere. The 2011 Great East Japan Earthquake — which at a magnitude 9 was the largest-ever recorded in Japan — came at midday on a Friday.

The Great Hanshin Earthquake in 1995 hit Kobe and the surrounding areas before most people were awake, at 5:46 a.m. on a Tuesday. And the two major quakes that struck Kumamoto Prefecture in April two years ago both occurred at nighttime.

The unpredictable nature of natural disasters is all the more reason to make sure you’re fully prepared, and officials say an emergency kit with basic necessities such as drinking water and emergency provisions that can feed a family for at least three days is just one of the many ways to get ready.

Parker Rom, a 26-year-old English teacher from the U.S., said the Osaka quake made him realize how unprepared he was for a major disaster.

“I’ve had to completely reconsider how to deal with an earthquake,” said Rom, who lives in Hirakata, one of the hardest-hit cities in Osaka Prefecture. “I started to put together an emergency kit and looked up where the nearest emergency shelter is. I plan to research more what to do when an earthquake strikes in different situations. I also have to think about where to store things around my apartment so that if something glass breaks, it won’t be in the way of my front door if I have to leave quickly.”

While none of his large items fell and nothing broke, he said the quake left his apartment “a mess.”

“Many trinkets flew off my shelves, many papers and books spilled out of my cabinets, food and toiletries fell into my sinks, and my washing machine and TV stand both moved forward a few inches,” he said.

Authorities recommend that residents take measures in their homes to avoid being hurt by falling furniture and broken glass, including pinning down large pieces of furniture and appliances using screws or nonpermanent methods such as tension rods and placing mats that prevent slipping in cupboards and shelves.

In the survey, 27 percent of respondents said they had taken some kind of measure to quakeproof their home.

Alison Kinoshita, who lives in the city of Osaka with her husband and three children, said she saw “things falling off walls and out of cupboards” as she and her son took cover underneath their dining table.

Afterward, the 51-year-old Australian who has lived in Japan for 25 years removed objects from the top of her furniture, fixed cabinets to the walls with screws and prepared thick-soled slippers in case of glass or debris on the floor.

“As the chances of a large quake in this region are higher now, I think I’ve prepared better than in the past,” she said, admitting that she was not ready “at all” for the 1995 Hanshin quake — her first earthquake experience.

Kinoshita was among 57 percent of respondents who said they know the location of the closest evacuation center to their residence.

Recommended list of items to include in emergency kits


A closer look at the shindo seismic scale


The Japan Meteorological Agency has a unique seismic scale called shindo that measures the degree of shaking in the event of an earthquake. This set of numbers, ranging from 0 to 7, is different from an earthquake’s magnitude, which is a numerical value reflecting the size or energy of the temblor at its source.

The shaking and effects become greater as the number increases, with shindo 5 and 6 further divided into lower and upper levels. At maximum 7, people cannot stay standing and may be thrown into the air, while unsecured pieces of furniture are likely to topple over or be tossed up in the air and reinforced concrete walls may collapse.

The June 18 quake that struck the Kansai region had a magnitude of 6.1, while the intensity varied depending on how strong the effects of seismic movement was. 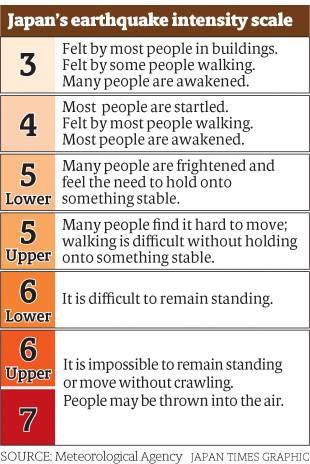 The areas nearest to the epicenter — the cities of Takatsuki, Hirakata, Ibaraki and Minoh and Osaka’s Kita Ward — registered a lower 6, which the agency describes as a level where people find it difficult to remain standing, unsecured furniture will likely fall and wall tiles will sustain damage.

Seismic intensity of upper five — where people find it difficult to move and dishes could fall out from cupboards — was recorded in some other areas of northern Osaka Prefecture and parts of Kyoto Prefecture and lower five — which may cause hanging objects to swing violently — at some locations in Osaka, Kyoto, Shiga, Hyogo and Nara prefectures.

Many people who are not moving around can feel shindo 2 quakes, which will make hanging objects swing slightly, while only some people staying put may feel slight movement in level 1. Zero intensity is detected by seismometers but not perceptible to people.