A strong earthquake in Osaka, Japan has killed at least three people, including a child, and injured more than 200.

Airports in the area were closed for several hours, train lines interrupted and factories had to halt production.

The 6.1 magnitude quake did not trigger a tsunami warning and nuclear plants in the area are operating normally.

Japan lies in a particularly earthquake-prone region and accounts for around 20% of quakes worldwide of magnitude 6.0 or more.

A nine-year old girl killed by a falling wall at her school was one of three confirmed fatalities.

An elderly man was also killed by a collapsing wall while another was trapped below a bookcase at home, national broadcaster NHK reported.

'I thought my time was up'
Atsushi Yokoi, a research scientist who lives in Ibaraki-shi near the epicentre of the tremor, told the BBC he was asleep when the quake struck.

"The earthquake woke me up," he said. "It felt like strong sideways shaking and lasted about five seconds, and I stayed there until it stopped."

After sending messages to his family and friends, he went to work to check the damage to his research equipment.

"Though most public transport was still paralysed, buses were working. All the experiments planned have bee cancelled and postponed until we are absolutely sure that there's no risk of an aftershock."

Regarding the earthquake at Osaka, I am safe. But things around my desk in the office got a bit messier (the iMac in the pic was still alive when I found it landed on the floor). Some of lab facilities's got damaged, people say. pic.twitter.com/GSX7cz8XiL
— Atsushi Yokoi (@ayokoi_exp) June 18, 2018


Ibaraki-shi resident Gloria Randriamihaja was also woken by the earthquake.

"It only lasted a minute but it seemed so long. My apartment was messed up, broken glasses on the floor, fridge open.

"The whole building was shaking, I was so scared, telling myself 'Gloria this is it, your time is up.' Finally the [shaking] stopped," she told the BBC.

Several people were trapped in elevators and roads were cracked with broken pipes spilling water. 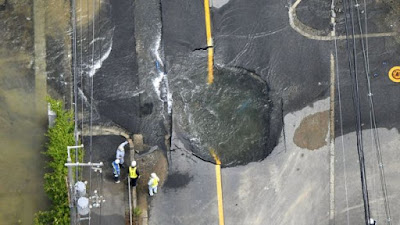 Some 170,000 houses were left without power and gas supplies to more than 100,000 homes were stopped, the Japan Times reported. 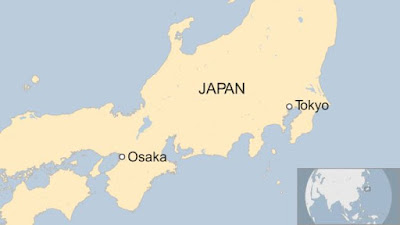 The earthquake registered as 6.1 on the Japan's quake scale, a level at which it is difficult to remain standing. The US Geological Survey measured it as magnitude 5.3.

Both the high-speed Shinkansen and local trains suspended operations during the morning commuting hours as several smaller aftershocks followed the quake.

The tremors also affected the prefectures of Kyoto, Nara, Hyogo, and Shiga.

Japan's meteorological agency warned there could be another big earthquake in the coming days.

There are also warnings that rain and landslides will continue to pose a danger for several days.

The quake also hit several key industrial areas near Osaka with companies like Panasonic and Daihatsu saying they were suspending production at their affected sites.