Donald Trump suggested firing nuclear weapons into hurricanes to prevent them hitting the US, reports in Washington claim.

The president is said to have raised the idea of bombing hurricanes with senior Homeland Security and national security officials on numerous occasions, dating back as far as 2017.

“I got it. I got it. Why don’t we nuke them?” one source told US news website Axios the president had asked during a hurricane briefing at the White House.

The source said the briefer was “knocked back on his heels” as Mr Trump went on to suggest dropping a nuclear bomb in the eye of an off-shore hurricane would disrupt its formation.

“People were astonished,” the source added. “After the meeting ended, we thought, ‘What the f***? What do we do with this?’” 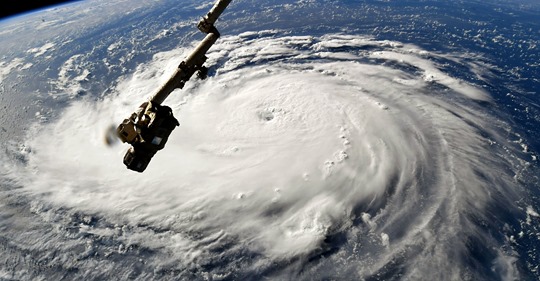 The briefer is said to have told the president they would “look into” the possibility.

Later, other officials were also reportedly briefed on the president’s remarks, which were recorded in a National Security Council (NSC) memorandum.

Another NSC memo from 2017 also reportedly details Mr Trump asking whether hurricanes could be bombed with conventional weapons in order to prevent them hitting the US.

“His goal – to keep a catastrophic hurricane from hitting the mainland – is not bad,” another senior White House official, who had been briefed on the president’s remarks told Axios. “His objective is not bad.”

Far from being a revolutionary, the idea of using nuclear weapons against hurricanes has a remarkably long history.

As far back at the late Fifties, scientists and government agencies in the US had floated proposals for exploding nuclear devices to break up large storms.

In 1959, meteorologist Jack W Reed suggested submarines could be used to launch warheads into the eye of a hurricane, one of several “peaceful” applications he imagined for nuclear weapons.

Today’s meteorologists at the National Oceanic and Atmospheric Administration (NOAA) however have less enthusiasm for nuking weather systems.

“Apart from the fact that this might not even alter the storm, this approach neglects the problem that the released radioactive fallout would fairly quickly move with the tradewinds to affect land areas and cause devastating environmental problems,” NOAA says on its website.

“Needless to say, this is not a good idea.”

Mr Trump later tweeted: "The story by Axios that President Trump wanted to blow up large hurricanes with nuclear weapons prior to reaching shore is ridiculous. I never said this. Just more FAKE NEWS!"