The birth of the semicolon

The semicolon was born in Venice in 1494. It was meant to signify a pause of a length somewhere between that of the comma and that of the colon, and this heritage was reflected in its form, which combines half of each of those marks. It was born into a time period of writerly experimentation and invention, a time when there were no punctuation rules, and readers created and discarded novel punctuation marks regularly. Texts (both handwritten and printed) record the testing-out and tinkering-with of punctuation by the fifteenth-century literati known as the Italian humanists. The humanists put a premium on eloquence and excellence in writing, and they called for the study and retranscription of Greek and Roman classical texts as a way to effect a “cultural rebirth” after the gloomy Middle Ages. In the service of these two goals, humanists published new writing and revised, repunctuated, and reprinted classical texts.

One of these humanists, Aldus Manutius, was the matchmaker who paired up comma and colon to create the semicolon. Manutius was a printer and publisher, and the first literary Latin text he issued was De Aetna, by his contemporary Pietro Bembo. De Aetna was an essay, written in dialogue form, about climbing volcanic Mount Etna in Italy. On its pages lay a new hybrid mark, specially cut for this text by the Bolognese type designer Francesco Griffo: the semicolon (and Griffo dreamed up a nice plump version) is sprinkled here and there throughout the text, conspiring with colons, commas, and parentheses to aid readers. 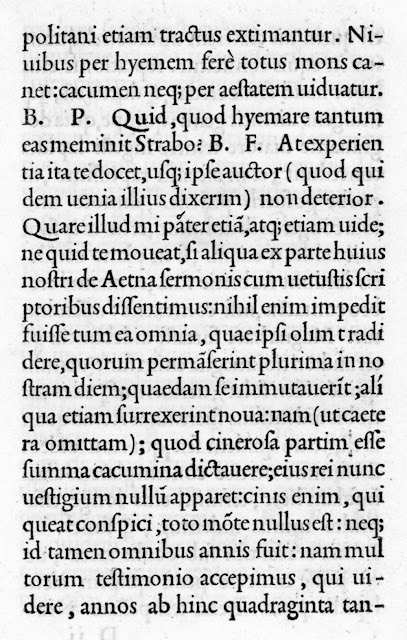 In this snippet, you can see four of these brand-new semicolons. You might think you see eight, but beware! That semicolonish mark at the end of the fourth line from the bottom isn’t a semicolon, it’s an abbreviation for que, Latin for “and.” In this case, it’s helping to shorten neque, or “also not.” It appears elsewhere in in the excerpt, always filling in the -ue part of a que. If you look closely, you’ll see that the dot-and- curve combination is raised higher up than a semicolon; it’s positioned on the same level as the words in the text because it’s shorthand for a word instead of a signal to pause. 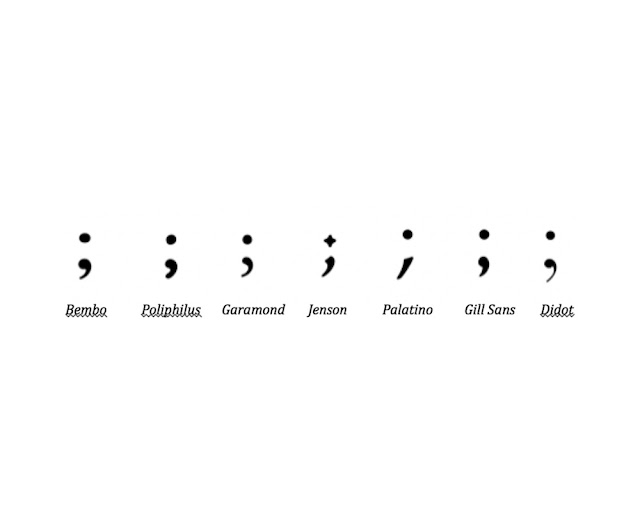 Nearly as soon as the ink was dry on those first semicolons, they began to proliferate, and newly cut font families began to include them as a matter of course. The Bembo typeface’s tall semicolon was the original that appeared in De Aetna, with its comma-half tensely coiled, tail thorn-sharp beneath the perfect orb thrown high above it. The semicolon in Poliphilus, relaxed and fuzzy, looks casual in comparison, like a Keith Haring character taking a break from buzzing. Garamond’s semicolon is watchful, aggressive, and elegant, its lower half a cobra’s head arced back to strike. Jenson’s is a simple shooting star. We moderns have accumulated a host of characterful semicolons to choose from: Palatino’s is a thin flapper in a big hat slouched against the wall at a party. Gill Sans MT’s semicolon has perfect posture, while Didot’s puffs its chest out pridefully. (For the postmodernist writer Donald Barthelme, none of these punch-cut disguises could ever conceal the semicolon’s innate hideousness: to him it was “ugly, ugly as a tick on a dog’s belly.”)

The semicolon had successfully colonized the letter cases of the best presses in Europe, but other newborn punctuation marks were not so lucky. The humanists tried out a lot of new punctuation ideas, but most of those marks had short life spans. Some of the printed texts that appeared in the centuries surrounding the semicolon’s birth look as though they are written partially in secret code: they are filled with mysterious dots, dashes, swoops, and curlicues. There were marks for the minutest distinctions and the most specific occasions. For instance, there was once a punctus percontativus, or rhetorical question mark, which was a mirror-image version of the question mark. Why did the semicolon survive and thrive when other marks did not? Probably because it was useful. Readers, writers, and printers found that the semicolon was worth the trouble to insert. The rhetorical question mark, on the other hand, faltered and then fizzled out completely. This isn’t too surprising: does anyone really need a special punctuation mark to know when a question is rhetorical?

In humanist times, just as in our own, hand-wringing sages forecast a literary apocalypse precipitated by too-casual attitudes about punctuation. “It is not concealed from you how great a shortage there is of intelligent scribes in these times,” wrote one French humanist to another,

and above all in transcribing those things which observe style to any degree; in which unless points and marks of distinctions, by which the style flows through the cola, commata, and periodi, are separated with more attentive diligence, that which is written is confused and barbarous … Which carelessness, in my opinion, has occurred chiefly since we have for a long time lacked eloquence, in which these things are necessary: the ancient manner of handwriting, therefore, in which the scribes of books (antiquarii) were gradually writing a perfect and correctly formed script with precise punctuation (certa distinctione) of clausulae and with notes of accentuation, has perished together with the art of expression (dictatu).

The entire art of expression—dead, because careless writers just couldn’t hack it when it came to punctuation. Well, I think we moderns might maintain that the art of expression gave us a few rather decent literary works even after the date of this fifteenth-century letter. But the lament of the French humanists is familiar, isn’t it? People can’t punctuate correctly, eloquence is slowly dying out. Plus ça change …

Still, a few cranky complainants notwithstanding, most humanists believed that each writer should work out his punctuation for himself, rather than employing a predetermined set of rules. A writer or an annotating reader was to exercise his own taste and judgment. This idea of punctuation as a matter of individual taste and style outlived the humanists: it stretched beyond the Latin texts that Manutius printed, crossing borders and oceans, and it survived as a way of thinking about the practice of punctuation well into the eighteenth century.